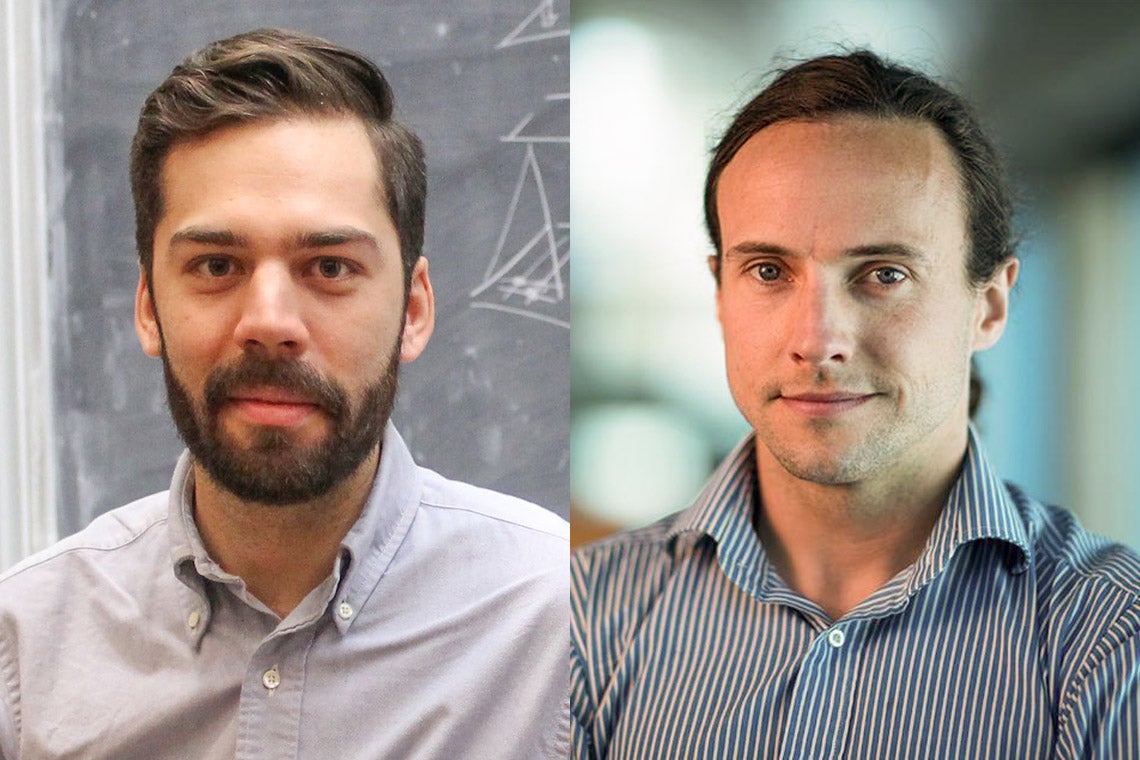 The University of Toronto and the affiliated Vector Institute for Artificial Intelligence have announced the recruitment of two rising stars in machine learning research as part of a continued drive to assemble the best AI talent in the world.

Chris Maddison and Jakob Foerster will both come to U of T having completed their doctoral research at the University of Oxford.

It’s a homecoming of sorts for Maddison. He earned his undergraduate and master’s degrees in computer science at U of T – the latter under the supervision of University Professor Emeritus Geoffrey Hinton. A senior research scientist at Google-owned AI firm DeepMind, Maddison will join U of T’s departments of computer science and statistical sciences in the Faculty of Arts & Science as an assistant professor next summer.

Foerster, a research scientist at Facebook AI Research, will start as an assistant professor in the department of computer and mathematical sciences at U of T Scarborough in fall of 2020.

“U of T’s reputation as an international hub of AI research was built on the efforts of its talented faculty,” says Vivek Goel, U of T vice-president, research and innovation, and strategic initiatives. “We're delighted to welcome two of the most highly sought after researchers in the spheres of machine learning and deep learning.”

Both Maddison and Foerster will be cross-appointed to the Vector Institute along with five current U of T faculty members, including Assistant Professor Animesh Garg in the department of computer science. Garg, who joined U of T in August, studies machine learning methods in robotics and is also a senior research scientist at NVIDIA.

“The cross-appointments with the Vector Institute are a testament to the robust partnership between our institutions, one that is at the forefront of efforts to further fundamental research in AI and advance its applications across a range of disciplines,” Goel says.

Garth Gibson, president and CEO of the Vector Institute, described the growing Toronto AI ecosystem as “a magnet for talented individuals,” adding that the fresh round of recruits will help build on Hinton’s legacy and pioneering contributions. Hinton’s work at U of T was instrumental in the development of deep learning, a sub-field of AI that deploys neural networks inspired by the human brain to learn and make decisions.

Maddison paid tribute to Hinton’s influence on the field of AI, describing him as “one of the kindest mentors” and hailing his enthusiasm for his research.

“I would see him on a Sunday at 9 p.m., and maybe he didn’t need to work that hard but he was there because he loved the ideas, and that was incredibly inspiring,” says Maddison. “When you glance over at his office, it’s like watching a child playing with Legos – that excitement is still there, and it inspired an entire community of people in machine learning.

“If you look at the list of people who have passed through U of T’s machine learning community, it includes many of the most impactful researchers of the last two or three decades – that’s partly a testament to Geoff’s style, energy and excitement.”

Maddison’s research focuses on the development of numerical methods for applications in deep learning and machine learning. He uses muffin-baking as an unlikely analogy to explain his line of inquiry.

“Imagine you don’t know anything about baking, and someone gave you a million muffins. Just by looking at them and inspecting them – and with no recipe – could you figure out how to bake a muffin? That captures the essence of the problem in machine learning," he said.

Maddison is keen to note that AI research and scholarship is as much about encouraging people to imagine what’s possible as it is about solving fundamental computational problems.

He uses the example of AlphaGo, an AI-powered computer program that he developed along with colleagues at DeepMind. In 2015, AlphaGo successfully defeated a world champion in the complex and millennia-old Chinese strategy game Go.

It’s a project that’s credited with advancing scientists’ understanding of how deep learning systems can be deployed to solve complex problems.

“Producing this player that could play Go at a super-human level was incredibly exciting because it expanded our conception of what is practically achievable with computation, and it also gave us a sense of which algorithms might be more effective than others,” says Maddison.

His research interests lie in multi-agent learning, a discipline that focuses on how multiple objects or agents can account for other agents in their environment and make decisions accordingly. It has direct implications for technologies ranging from speech recognition to self-driving cars.

“When a self-driving car pulls up to an intersection, it needs to decide what to do. To do this, it has to consider how other cars are going to respond to its actions,” Foerster explains. “But the way human drivers respond to scenarios depends on things they’ve seen in the past. So the self-driving car has to assess the points of view, beliefs and intentions of the human driver.

“I’m working to use deep reinforcement learning to develop these kinds of capabilities.”

Foerster, a German national, says he was drawn to U of T by its world-leading AI talent and its support of ambitious and long-term research projects.

“I was looking for a place where I can work with the brightest minds in the field, but also a place where there’s capacity to think long-term, produce novel ideas and be creative and work on things that might only have an impact many years down the road,” he says.

“Toronto has an extraordinary environment in terms of talent and resources that have been accumulated there over a period of decades. I wanted to follow that long tradition and hopefully create great work in the future.”

In addition to producing cutting-edge research, Foerster says he’s excited at the opportunity to mentor students and young scholars.

“One of the pillars of academia is the ability to mentor students, and I look forward to doing this both through teaching in the classroom – I hope to teach courses on machine learning, reinforcement learning and multi-agent learning – and through supervision of master’s and PhD students,” he says.

“I’ve been fortunate to receive excellent supervision and mentorship myself, and I’d like to pay that forward by helping others grow and achieve their dreams.”

The new members of the Vector Institute include: