U of T urban expert on Rio Olympics: “I don’t think any city is ever fully prepared” 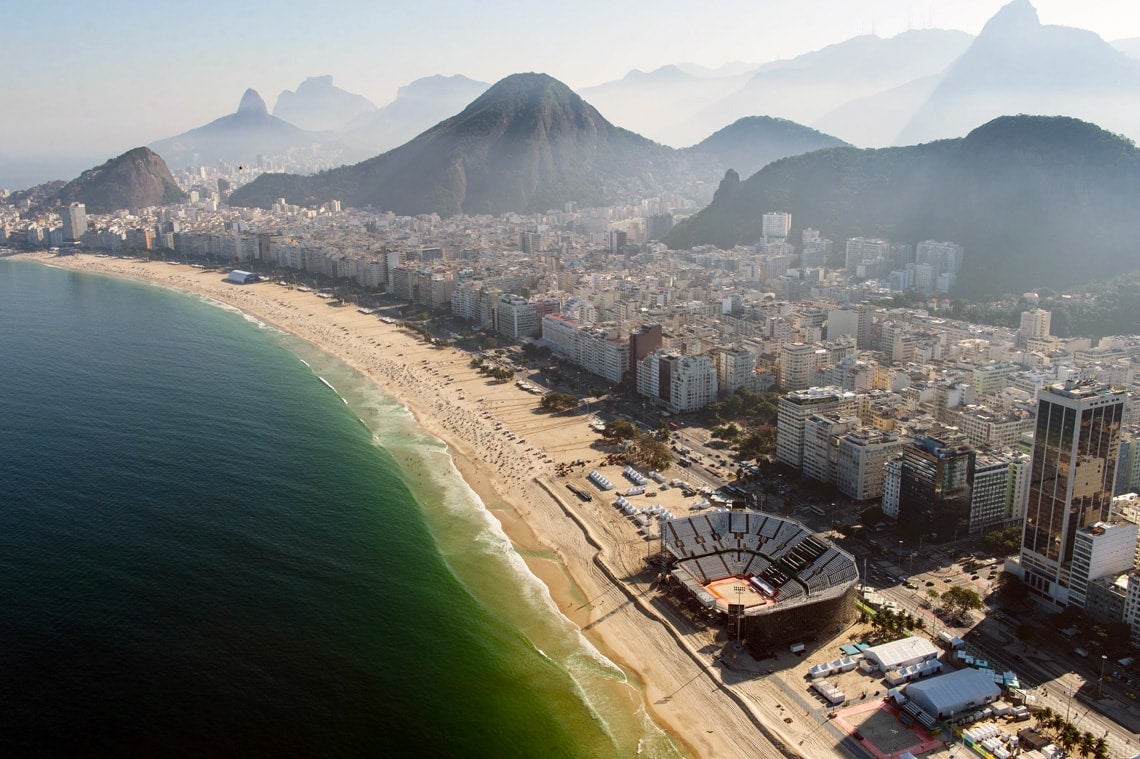 Opening ceremonies are set to begin a week from today but the road to the Rio Olympics has been nothing short of rocky.

The threat of the Zika virus – which has prompted some athletes to pull out of the Games – still looms. The sewage-filled venue for some water sports, Guanabara Bay, was never cleaned up as promised. And, as so often seems to be the case in the final days counting down to the Games, the Athletes Village is still a work-in-progress. Add to all of this the existing social inequality and political unrest in the country.

Will Rio be ready for the Olympics? U of T News asked David Roberts, assistant professor, teaching stream, in urban studies at the University of Toronto. His research focuses on the impact of mega-events on a city and its urbanization.

In 2014, an International Olympic Committee (IOC) member visiting the Olympics site in Rio said the preparations were the “worst ever.” Are they? It’s hard to know what the worst-prepared city is because they said that as well for pretty much every mega-event, whether it’s the Olympics or the World Cup. I think it’s pretty obvious that there are some things that aren’t quite up to snuff in Rio – the Athletes Village seems to be only half-done just a few days before the Games and there’s sewage in the bay.

But I don’t think any city is ever fully prepared. And that’s part of the challenge of the whole thing.

Remarkably, cities and countries are able to rise to the occasion and what I think we’ll see is, as soon as the Games start, most of the media coverage will switch from lack of preparation or fear of disease or fear of violence and whatever else to the competition. These Games are really well orchestrated to capture that type of attention and draw attention away from all the other sorts of things that are happening.

I’m sure we’ll see some reports here and there about athletes getting sick or criticizing some aspect of the preparations like we saw in Sochi for example, but for the most part I think our coverage will be about the nationalistic celebration of sport.

There’s a heightened fear of terror attacks in the Western world – what are the security implications for the Rio Olympics?  It’s hard to know exactly what’s happening in Rio itself for various reasons. One, we don’t get as much news about Brazil and Rio as we do about other parts of the world – especially English-language news. Two, the political unrest makes it hard to get any official news that’s reliable.

Beyond that, it’s not the same space in which we’re seeing terrorism play out in Europe in particular and the Middle East.

Sure, the threat of violence is contemporarily something we have to deal with globally, but I’m not entirely sure what that means for Rio. If anything, Rio is prepared on the security front – they’ve spent tons of money on security. They showed in the World Cup two years ago that they have that capacity and mindset. Usually places that are hosting these events are in such a lockdown they are quite secure. Will the infrastructure spending leading up to the Olympics in Rio benefit the city in the future?  It’s hard to make the case that the long-term benefits will reap rewards that will pay them back for that amount of spending.

These spectacles have gotten to the point where they’re so expensive and so targeted at specific areas within the city – rather than the city as a whole – that the rewards are quite uneven and don’t match up, ever, to the spending that takes place and the host.

The owners of games (whether the IOC or FIFA) are quite adept at extracting their cut of the pie out of the whole system.  Even if there is television revenue, a lot of that’s going back to these international organizations – and not into the communities there.

Some people will benefit a lot but it’ll likely be the “haves” of Rio society.

So why on earth do these cities do it? That’s a great question. Part of it is the challenge to become recognized as a world class city. Whatever that might mean – keeping up with the Joneses or establishing oneself as a destination for tourists or business investment – is really a pressing concern of a lot of different cities.

We could ask that same question as to why Toronto would ever want to host the Olympics. What would be the benefit from all that expending? Maybe we can get some extra money for infrastructure. And it may be able to raise our profile – but to what end? I don’t think that’s ever really spelled out.

If you’re a politician wanting to put your stamp on a city, then that’s something you’re interested in, but in terms of social benefits, they never seem to play out.

It’s very much based on short-term thinking rather than any sort of long-term assessment of what might be good for Rio or any other city that’s hosting these things going forward. It’s especially a challenge when cities are faced with high levels of inequality and high levels of uneven development within a city.

It’s one thing for London to host an event because they have much of the infrastructure already there so they’re not spending as much initially to host an event, but even then it’s a risky gamble. it’s quite another when you’re dealing with a city that has some basic needs that should be taken care of and real stark inequality on the ground that this seems to only exacerbate.

(Below: the International Road Cycling competition in Copacabana Beach in Rio de Janeiro, Brazil served as a test for the Rio 2016 Olympic Games TASSO MARCELO/AFP/Getty Images) Is it irresponsible for the IOC and other sporting organizations to grant these cities the ability to host these mega-events? That is a really thorny question because for a long time the Olympics and the World Cup were all pretty much hosted in developed countries – in Europe and North America with a couple of exceptions. There was a strong critique by other parts of the world that say it really narrows who can take advantage of this opportunity. So there’s a huge critique about the fact that there was never a mega-event in Africa or the Middle East and it had been decades and decades since Central or South America hosted one.

The problem I think, ultimately, is that the formula didn’t change. The IOC and FIFA expect the same games no matter where it is in the world and don’t take into account the local context. Not only is the funding formula the same for a rich country and a developing country, so are the expectations of infrastructure and everything else.

A better question is – if we want these giant events to continue and we think it’s a good idea to have them in every corner of the globe, what can we do to make sure they don’t damage the local community, they don’t exacerbate inequality and they don’t negatively impact the ways of life of a lot of people?

There’s enough money there that FIFA and IOC don’t have to extract billions of dollars of profit if they host these games. If they had a more equitable structure, there might be a way of doing that.

If we as consumers choose to not watch or choose to find other ways to influence the games – such as not supporting the sponsors – then change would probably happen a lot quicker.

But it’s rare to get a large enough group of people to boycott something – enough to make an impact. That’s the effective power of these types of events – they tap into all kinds of things. They tap into our love of competition, our benevolent nationalism, they tap into excitement – they give us a collective thing to celebrate. There are a lot of reasons why the stories about inequality, disease and pollution go out the window as soon as these events start. It’s because what the news media and what we’re going to be talking about by the proverbial water cooler are the sporting events themselves rather than the context which they’re being staged.

One of the things I’m interested in is how these events are as much played out on television as anywhere else – and how adept planning departments have gotten at staging television events rather than urban events.

You clean up the parts that are going to be on TV and you make really nice parts of the city. You have this really uneven development that’s designed to look good on television and when you get there you realize it’s no different than any other television set – it’s quite thin in terms of its relevance to everyday life.