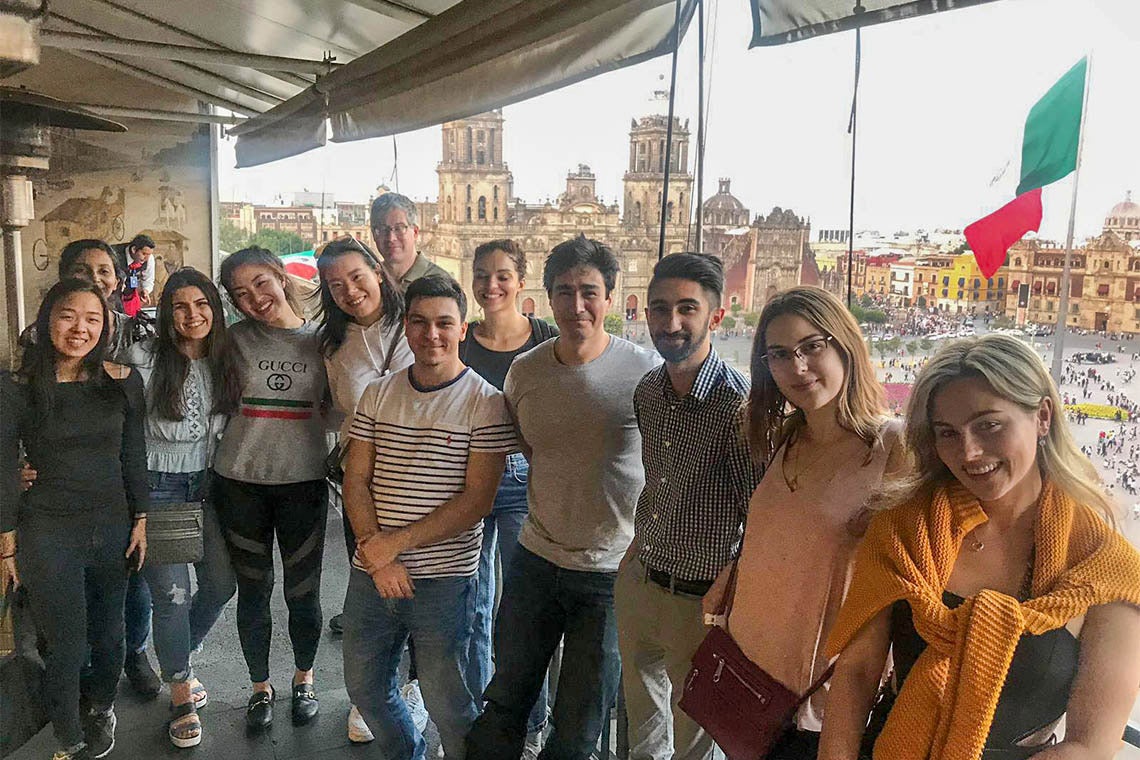 Students from a fourth-year U of T undergraduate course on organized crime and corruption traveled to Mexico City to meet with Mexican scholars, students, government officials and civil society activists (photo by Solomiya-Mariya Zakharchuk)

Mexico may be a popular tourist destination known for its beautiful landscapes and rich history, but a group of undergraduate students from the University of Toronto recently visited for a very different reason: to learn about organized crime, corruption, drug cartels and the massive “narco-insurgency” that large-scale criminal organizations are waging against the Mexican state.

As part of the Faculty of Arts & Science’s International/Indigenous Course Modules (ICM) program, students from the fourth-year undergraduate course on organized crime and corruption traveled to Mexico City to meet with Mexican scholars, students, government officials and civil society activists to learn how organized crime groups develop and how states are combatting the violence and corruption these groups provoke.

Associate Professor Matthew Light of the Centre for Criminology & Sociolegal Studies developed this innovative course, the first of its kind at U of T. He believes contemporary Mexico is an excellent practical illustration of the theoretical and historical concepts he presents to his students, so an experiential learning opportunity seemed like the perfect fit for his course material.

“The ICM gave me a great experience of what field research would be like,” says fourth-year St. Michael’s College student David Delle Fave, who is completing a double major in criminology and sociolegal studies along with the ethics, society and law program.

“I took extensive field notes during the trip, and am writing my final project for the class based on my journal.”

The scholarly portions of the students’ trip included meetings with Professor Mónica Serrano of El Colegio de México (Colmex) and the World Economic Forum, as well as her Canadian colleague, Professor Jean François Prud’homme, who is originally from Quebec and now leads the Centro de Estudios Internacionales at Colmex. Students also had the chance to form small co-operative working groups with their Mexican peers, leading to a more holistic and nuanced understanding of the factors that influence crime and corruption.

“We learned, for example, about the impacts of NAFTA on trade and the domestic economy,” says Solomiya-Mariya Zakharchuk, a fourth-year St. Michael’s College student who is completing a double major in political science and criminology. “And we discussed stronger border regulation and higher wages for public officials to dissuade them from corrupt practices.

“It was only through speaking with people from different sectors that I came to understand that the organized crime problem in Mexico must be analyzed through many lenses: economic, political, sociological and agricultural.”

“It was fascinating to hear Perez speak about the effects of Mexico’s arms trafficking on homicide rates,” says fourth-year Woodsworth College student Sabrina Chee, who is completing a double major in political science, as well as criminology and sociolegal studies.

“He focused on the ways gun policies in the U.S. directly affect gun violence in Mexico, which provided us with a more well-rounded understanding of patterns in policing strategies and pro-active policies adopted across North America.”

Outside of their research, students also had the opportunity to experience the sights and sounds of Mexico City, a vast metropolitan area that is home to 21.2 million people – making it the fifth most populous urban area in the world. They visited the city’s famed anthropological museum and the Teotihuacan pyramids, an important pre-Columbian historical site.

A number of students remarked on the transformative experience of visiting the open-air Tepito market. A poor, working-class neighbourhood, Tepito houses a large underground economy and has at times been known as a hotbed of crime. But the ICM students say they felt safe under the supervision of their local guides.

“It was clear that our safety was a primary concern for those coordinating our tour,” says Delle Fave.

Ultimately, the students came away with an eye-opening impression of how stereotypes conflict with reality.

The Tepito market visit was “the most unexpected experience I had on my trip,” says Delle Fave. “Our visit broke down some of the stereotypes that many students had about the market. We got a first-hand, in-depth understanding of the history of the area, as well as the people who live there.”

The trip helped students distinguish between stereotypes about Mexico – that it’s overrun by crime – and the diverse reality of the country and its people.

“Learning about and listening to many of the lived experiences of people who have been directly involved in, or affected by, the lucrative arms and drug trade helped us to bridge the gap between appearance and reality,” says Chee.

Chee says her experience inspired her to think more deeply about the ways she can help improve the lives of people affected by violence, particularly women and girls. “My experience in Mexico City solidified my choice to pursue a career in the foreign services and advocate for human rights,” she says.

More than just advancing their education and careers, students remarked that the ICM trip solidified and strengthened their friendships with each other and their Mexican peers.

“My biggest takeaway from this trip, beyond the knowledge I acquired, is definitely the friendships I've formed with my classmates and with the students in Mexico,” says Jennifer Chan, a fourth-year Victoria College student completing a double major in psychology and criminology.

“The time we spent together learning about issues and policies in Mexico, exploring the city and discussing the causes each of us care about allowed us to develop friendships that cannot be replaced. Without the ICM, I would not have met people who constantly inspire me with their passion for making a positive impact.”