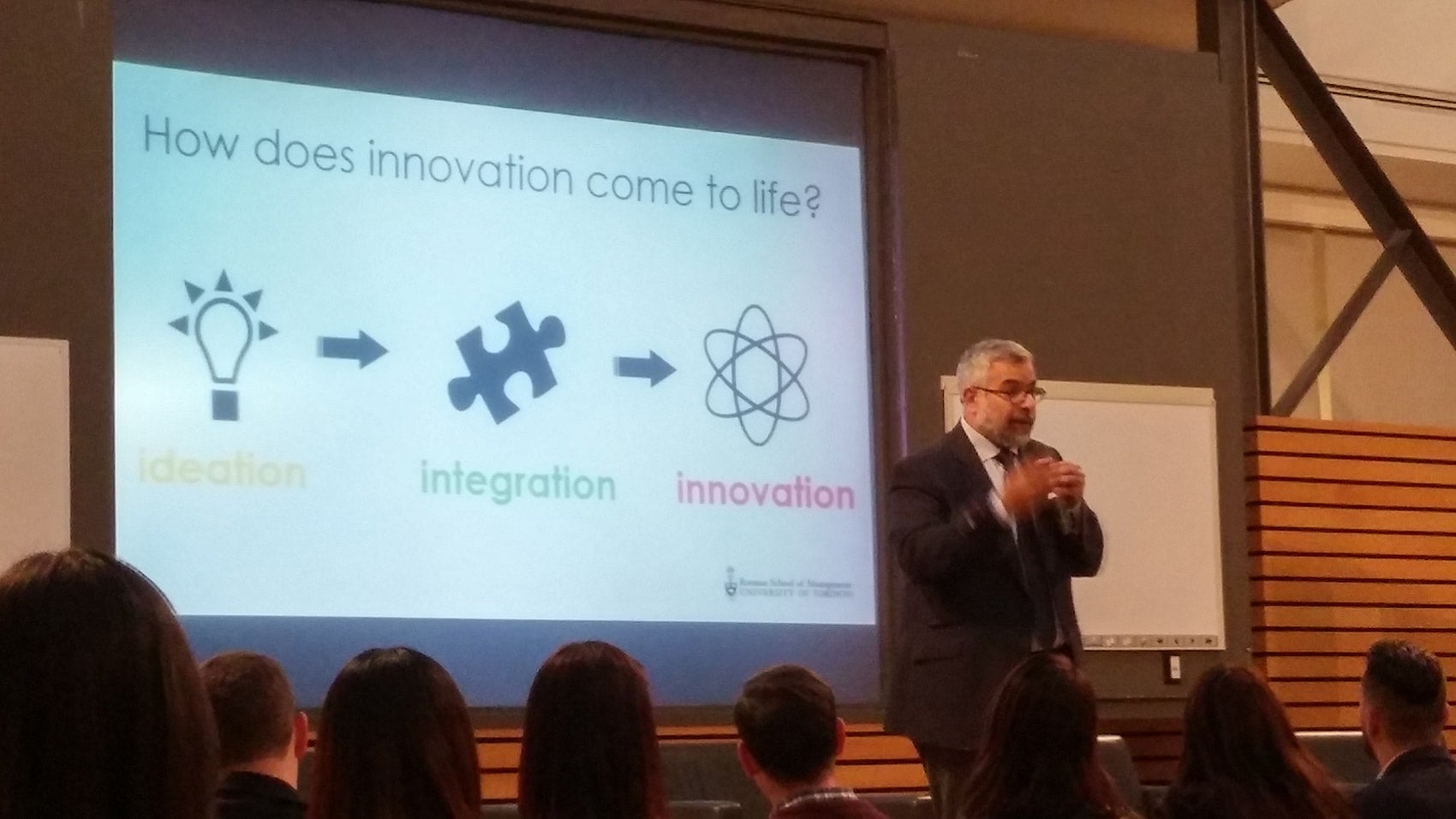 Previous U of T teams have done well in the competition

University of Toronto students who want to change the world are being invited to compete for the Clinton Global Initiative's 2017 Hult Prize.

"The Hult Prize has students from around the world seeking the holy grail: solutions to the world's biggest social and environmental challenges using sustainable business models,” said Rod Lohin, executive director of the Michael Lee-Chin Family Institute for Corporate Citizenship, located at U of T’s Rotman School of Management.

“University of Toronto students – from a variety of disciplines – have proven they can compete. Two years ago Rotman's Team Attollo made it to the finals, and last year four U of T teams made it to the regional finals. With the benefit of those teams’ experience and even more supports for our new teams, surely more University of Toronto students will take up the quest and win."

The Hult Prize is considered the world’s largest and most prestigious student competition for social good. At stake is US$1 million in start-up funds and invaluable mentorship from international business leaders.

Last week, U of T launched the 2017 Challenge with an information session, hoping to attract students from multiple disciplines.

This year’s Hult Prize challenge is addressing the refugee crisis, which has touched many Canadians personally. Between November 2015 and February 2016, the Canadian government resettled more than 25,000 Syrian refugees. Many more Syrian refugee families were relocated here – and continue to arrive – under Canada's private sponsorship program. 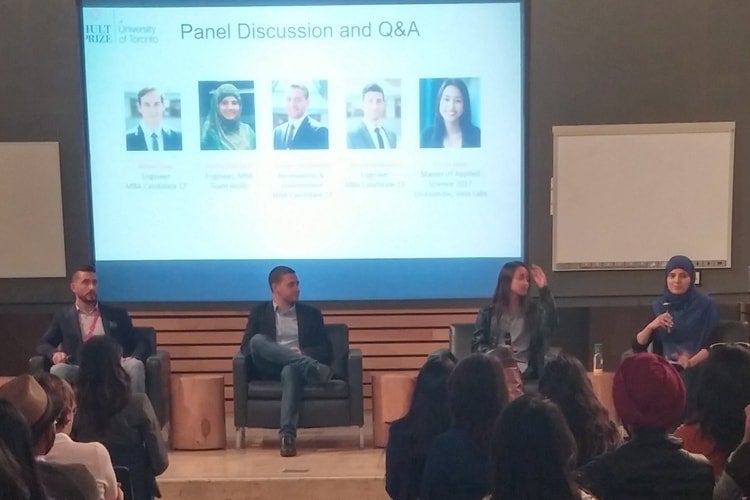 Aisha Bukhari (at right with microphone), a member of the 2015 U of T Hult Prize team, speaks on a panel at this year's Hult kickoff

The Hult Prize Foundation, which runs the international competition, believes the world’s refugee population today far outnumbers the United Nation’s figure of 60 million: the foundation estimates the number is closer to 1 billion.

Students are being challenged to come up with social ventures that address a range of social service categories for the refugees on a large scale.

“Rather than focus on aid and charitable approaches to refugee migration, we focus this challenge on the reawakening of human potential,” says the foundation’s website. “We want to restore pride, dignity and self-worth back to those that have been impacted by social injustices, war and economic depression.”

Tina-Marie Assi, the campus director for the Hult Prize at U of T, is a second-year MBA student at Rotman with a PhD in global health epidemiology. She believes Canadian students bring a unique perspective to the challenge this year because of the country’s refugee resettlement program.

“It’s a real issue around the world, but I think Canadians are uniquely positioned to not only tap into that population but also understand the needs and to get a different perspective on the topic first-hand,” Assi said. “There’s a great opportunity.”

At the information session at Rotman Oct. 11, organizers brought in speakers including alum Aisha Bukhari, who was a member of the runners-up Team Attollo, in 2015.

Her team’s idea of “Talking Stickers,” a literacy tool with QR codes for objects and story books to help children in impoverished countries learn how to read, has generated much buzz including from UNICEF and the World Health Organization.

Read more about Team Attollo in 2015

Students interested in the competition are asked to form teams of four people, preferably from a variety of backgrounds. U of T’s nine innovation and entrepreneurship accelerators are a potential source of mentors for the teams.

Rotman hosts various workshops including ones on branding, pitching and on project design. U of T will host the university competition on Dec. 3. Winners of that event will be fast-tracked to the regional competition, but other teams may still apply individually to present there.

“At a university like ours where there is so much talent, so much innovation, we really can be coming up with those transformative ideas,” Assi said. “We’re uniquely positioned to contribute to this type of competition and to win it.”

Nouman Ashraf, an assistant professor in the teaching stream at Rotman, believes the real take-away for students is the learning that comes out of “attacking a seemingly intractable problem” like the refugee crisis.

“The key to a successful Hult Prize submission is empathy for the lived experience of the end users to whom the solution is targeted,” he said. “Canadian students have a potentially robust and rich opportunity to engage with the many refugees who are here in dialogue that enables learning, prototyping and testing ideas for impact.”