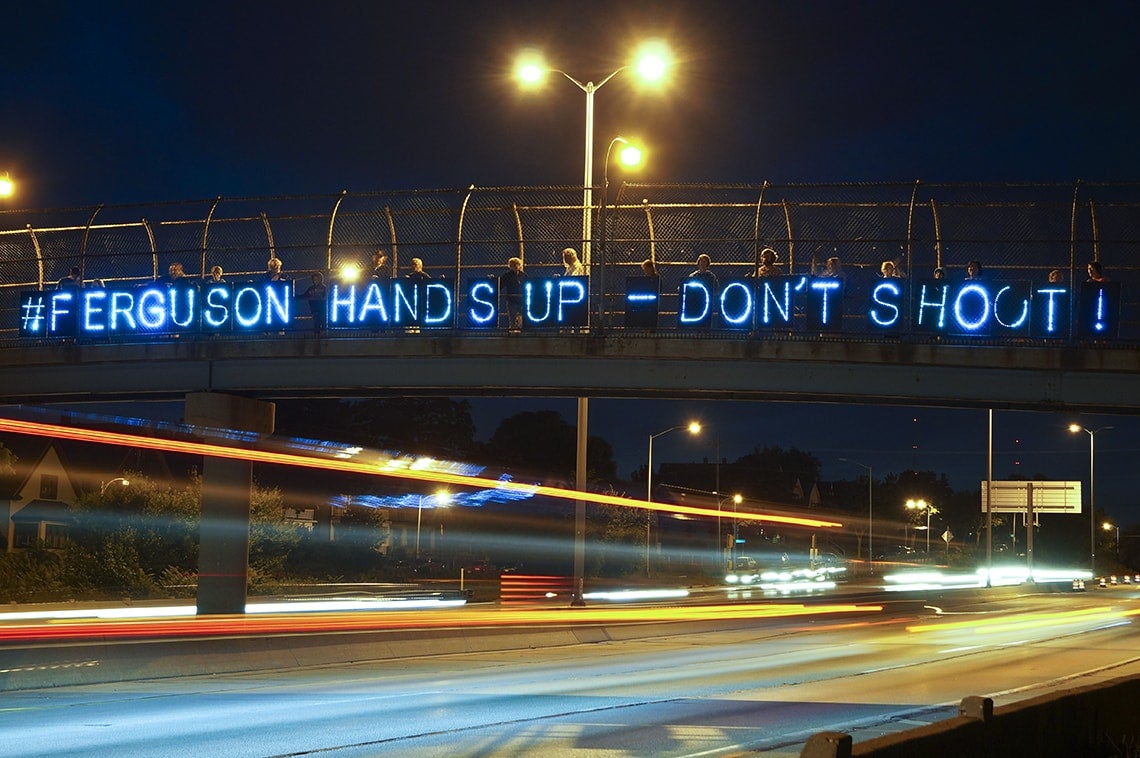 Protesters against police shootings have stood up in support of unarmed victims of police killings like Michael Brown who was shot to death in Ferguson, Mo., in 2014 (photo by Joe Brusky via Flickr)

The study says police shooting are often accompanied by explanations that cite the physical size of the person shot, and that people see black men as larger and more threatening

According to University of Toronto research, people have a tendency to perceive black men as larger and more threatening than similarly-sized white men.

In a paper published by the American Psychological Association, entitled “Racial Bias in Judgments of Physical Size and Formidability: From Size to Threat,” researchers say that unarmed black men are disproportionately more likely to be shot and killed by police and that these killings are often accompanied by explanations that cite the physical size of the person shot.

“Our findings suggest that people’s stereotypes distort their vision, leading them to literally see black men as larger than white men even when they are exactly the same size,” said Nicholas Rule, an associate professor of psychology in the Faculty of Arts & Science.

Rule worked on the study with John Paul Wilson, a former U of T post-doctoral researcher now at Montclair State University, and Kurt Hugenberg of Miami University.

The researchers conducted a series of experiments involving more than 950 online participants – all from the United States – in which people were shown a series of colour photographs of the white and black male faces of individuals who were all of equal height and weight (photo at left of body muscularity array used in the research). The participants were then asked to estimate the height, weight, strength and overall muscularity of the men pictured.

“We found that these estimates were consistently biased. Participants judged the black men to be larger, stronger and more muscular than the white men, even though they were actually the same size,” said Wilson, the study’s lead author. “Participants also believed that the black men were more capable of causing harm in a hypothetical altercation, and troublingly that police would be more justified in using force to subdue them, even if the men were unarmed.”

The researchers found that even black participants displayed this bias, but while they judged young black men to be more muscular than young white men, they did not judge them to be more harmful or deserving of force.

In one experiment, where participants were shown identically sized bodies labelled either black or white, they were more likely to describe the black ones as taller and heavier. In another, the size bias was most pronounced for the men whose facial features looked the most stereotypically black.

“We found that men with darker skin and more stereotypically black facial features tended to be most likely to elicit biased-size perceptions, even though they were actually no larger than men with lighter skin and less stereotypical facial features,” said Wilson. “Thus, the size bias doesn’t rely just on a white-versus-black group boundary. It also varies within black men according to their facial features.”

Black men are disproportionately more likely to be killed in interactions with police, even when unarmed, according to Wilson, and this research suggests that misperceptions of black men’s body size might be one contributor to police decisions to shoot.

But, he cautioned, the studies do not simulate real-world threat scenarios like those facing actual police officers.

“Knowing about these biases gives us the opportunity to monitor ourselves and overcome them,” said Rule. “But because law enforcement personnel have to make such quick decisions under extreme stress, they need to rely on their instincts more than most people. We need to better understand how that stress affects these misperceptions to figure out effective strategies to help officers, and the people they protect.”

The research was published in the Journal of Personality and Social Psychology. Previous research, also published in this journal, suggested that people view younger black men as older and less innocent than similarly-aged white boys, and that training and experience can help police overcome racial bias in shoot-don’t shoot scenarios.