U of T students have 'Googliness,' says Google exec

U of T President Meric Gertler spoke with Don Harrison, a graduate of U of T's Faculty of Law, at Google about his university experience (photo by Rebecca Wilkowski Photography)

Don Harrison, a graduate of U of T's law school, speaks to prospective students

"Googliness" is hard to put your finger on. It’s a quality used to describe employees and new hires at the tech giant – a mix of passion, drive and creative thinking.

The University of Toronto and Canadian culture bring these traits out in students, according to Don Harrison, Google’s vice president of corporate development.

Googliness isn’t just about being smart.

“You also have to operate in a way that’s respectful, kind and builds consensus,” he said. “U of T does a great job of producing that.”

And he should know. He graduated from U of T’s Faculty of Law in 1997, then worked for a law firm that helped take Google public. He later joined the tech company and now leads its corporate development branch, managing global mergers and acquisitions, and working on the company’s largest transactions including Motorola and Deepmind, which specializes in artificial intelligence.

Harrison hosted fellow alumni and American students interested in applying to U of T at an event in Sunnyvale, Calif., on Thursday. In conversation with U of T President Meric Gertler, he reflected on how his university experience set him up for a career at one of the world’s top-10 largest tech companies. 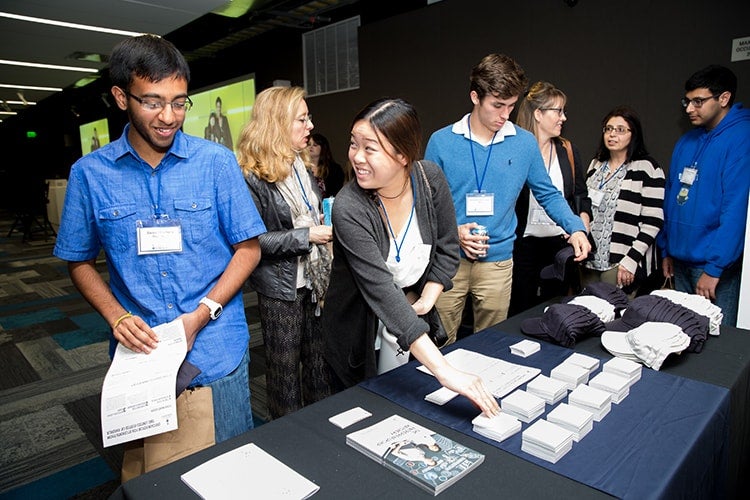 American students curious about studying at U of T attended an information session in Sunnyvale, Calif., this week (photo by Rebecca Wilkowski Photography)

The university teaches its students to operate in diverse workplaces, and they would fit right in at Google, Harrison told U of T News. One reason for that is the university’s location, at the heart of Canada’s largest city, where about half the population were born abroad.

Another draw for students is the quality of the university's researchers, many of whom are laying the groundwork for a high-tech future.

“U of T has managed to be at the forefront of a bunch of trends,” he said. “Two that jump out at me, artificial intelligence and machine learning techniques, are more and more becoming the foundation of new products and industries.”

The university is home to a pioneer in the field, Geoffrey Hinton, who is often referred to as the “godfather of neural networks” and whose work paved the way for Google Translate. Hinton now splits his time between teaching at U of T and working at Google as an engineering fellow.

Read about Hinton in the Toronto Star

With professors like Hinton, U of T provides a world-class education in subjects like artifical intelligence, Harrison said.

“I feel like, for a budding software engineer or computer scientist, U of T provides a good place to get training and background, and access to the best companies in the world,” he said.

Zoya Bylinskii can attest to that. A computer science graduate and panelist at a student recruitment event in Boston on Tuesday, she spent part of her undergraduate years developing an application allowing a computer to recognize objects by breaking it up into component parts.

“It's using principles of perceptual organization, how people perceive the world, how they take parts and group things into a whole,” she explained. “It really goes to the depths of human object recognition and applies it to computational algorithms to make them smarter in a natural way.”

After graduating from U of T in 2012, she is continuing her studies at the Massachusetts Institute of Technology.

“U of T's computer science program does open up a lot of opportunities,” she said.

Many American students seem intent to move in the opposite direction to study at the University of Toronto. Earlier this year, U of T’s Vice-President-International Ted Sargent said applications from American students were up 70 per cent.

The California event was the last in a series of student recruitment events held across the United States last week. The week kicked off with an event in New York City featuring alumnus and Saturday Night Live creator Lorne Michaels.

Read what Michaels had to say to prospective students