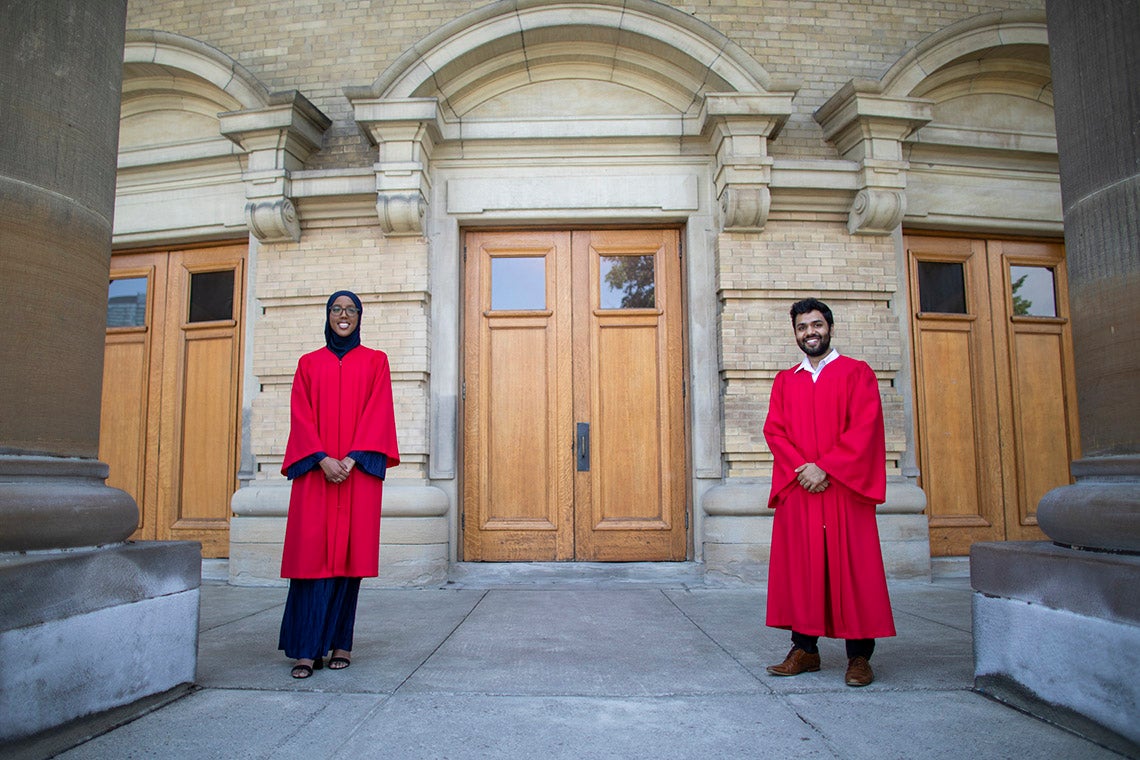 Habon Ali made a rare trip outside her home this week to join a small number of University of Toronto students at Convocation Hall.

A graduating student and valedictorian at U of T Mississauga, Ali was one of two student ambassadors chosen to represent the Class of 2020 during a pre-recorded virtual convocation event that will be aired at noon on June 2 for more than 15,000 graduating students and their families around the world.

She was joined in the role by Kramay Patel, an MD/PhD student in the Faculty of Medicine and Faculty of Applied Science & Engineering who organized a mask-sewing drive during the pandemic.

Both students were asked to participate in U of T’s first-ever virtual convocation ceremony – necessary because of the need to prevent large gatherings amid the COVID-19 pandemic – because of their track records of community service.

“It’s deeply honouring,” said Ali, who has raised topics such as anti-Black racism, gun violence and, more recently, the impact of COVID-19 on youth in conversations with Prime Minister Justin Trudeau as a member of the Prime Minister’s Youth Council.

A small number of other U of T students, selected by their deans and college principals to serve as divisional student ambassadors, were invited to offer congratulations to the graduating students in their respective academic divisions while standing next to the gonfalon for their academic division. (Gonfalons, which originated in medieval Italy, are banners that hang from a crosspiece or frame and are used by universities around the world as insignias for individual faculties, school and colleges.)

Following the ambassadors’ congratulatory remarks, the broadcast will scroll through the names of all 15,508 members of the Class of 2020. 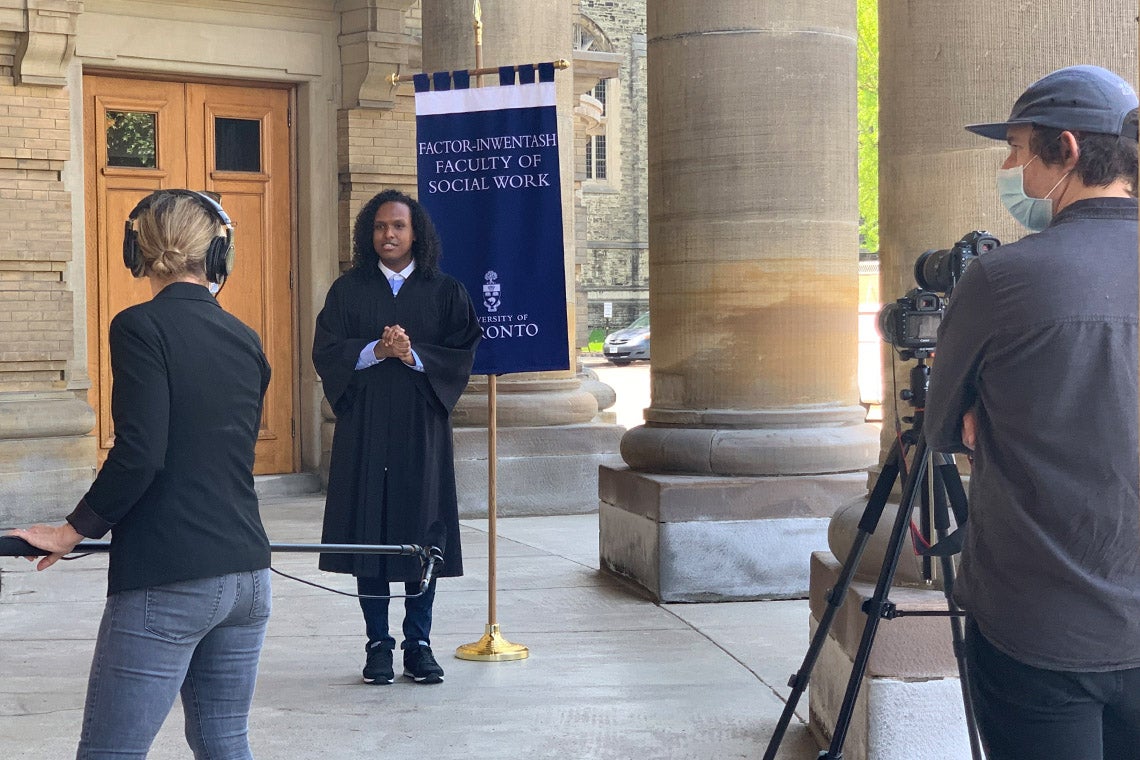 Egag Egag, of the Factor-Inwentash Faculty of Social Work, is filmed standing next to a gonfalon (photo by Brenda Ichikawa)

Wearing the blue-and-white president’s gown, U of T President Meric Gertler thanked the students for volunteering their time to help celebrate their classmates’ achievements.

Speaking to U of T News later, he said the university wanted students to be prominent participants in the virtual convocation, just as they are the focus of the in-person ceremonies each year.

“We wanted to capture the huge diversity of the many different disciplines represented at convocation, and also the amazing cultural diversity of the institution – all while respecting and maintaining social distancing practices,” he said.

Changing the plan for convocation this year was not an easy decision, President Gertler added. But he said he hopes the virtual alternative – followed by in-person celebrations hosted by faculties and divisions once it is safe to do so – allows graduates to appreciate the magnitude of what they have accomplished during a particularly challenging moment in history.

“We hope that they will be optimists and see the longer game here, and know that the education they have received at the University of Toronto – the experiences they acquired, the friends they made, the networks they created – will serve them well in the future,” President Gertler said. 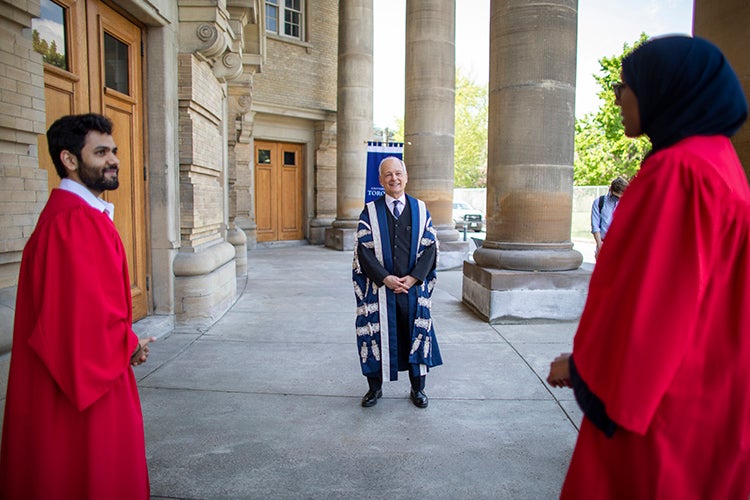 Ali, a biology and environmental science major, plans to continue her studies in health science at McMaster University, where she received a scholarship to pursue a master’s in global health.

A first-generation student whose parents fled the civil war in Somalia in the 1990s, Ali said she chose biology as one of her two majors at U of T because she wanted to learn more about her brother’s genetic disorder, Prader-Willi syndrome. It occurs in roughly one in 15,000 births and its main symptom is an uncontrollable appetite, which can lead to a host of health issues including obesity and type-2 diabetes.

While her graduation is not happening the way she envisioned, Ali said she is still going to find a way to celebrate.

“I’m excited to share this with my family and my friends and extended family all over the world.”

Outside Convocation Hall, she saw Emin Nawaz, a master of public health student and ambassador for the Dalla Lana School of Public Health, who first met Ali online while organizing a Ramadan reflection group on Facebook.

It was their first time seeing each other face-to-face.

“This is so weird because I’m a hugger,” Ali said. “We’ll have to take a socially distanced photo later.”

Ali later met up with her co-ambassador Patel outside the hall, where a film crew was waiting to record their message to students. Two-and-a-half months ago, Patel launched a drive to sew masks for front-line health-care workers and vulnerable people, including seniors and the homeless. Stitch4Corona has since enlisted about 700 volunteers across the city who have made thousands of masks.

Patel said he was humbled to be chosen as a student ambassador on behalf of the Class of 2020.

“I can’t put into words what it means to me,” he said.

With COVID-19 making large gatherings unsafe, at least for the time being, Patel says the online convocation video is a sensible alternative.

“Given the circumstances, this is what we have to live with and get used to for the next little while,” he said. “But this is a good start to the new normal we’re all trying to return to.”

Nominated by their deans and principals to represent their peers, all divisional student ambassadors were filmed individually, maintaining physical distancing guidelines.

Here is the full list of students who served as divisional student ambassadors: