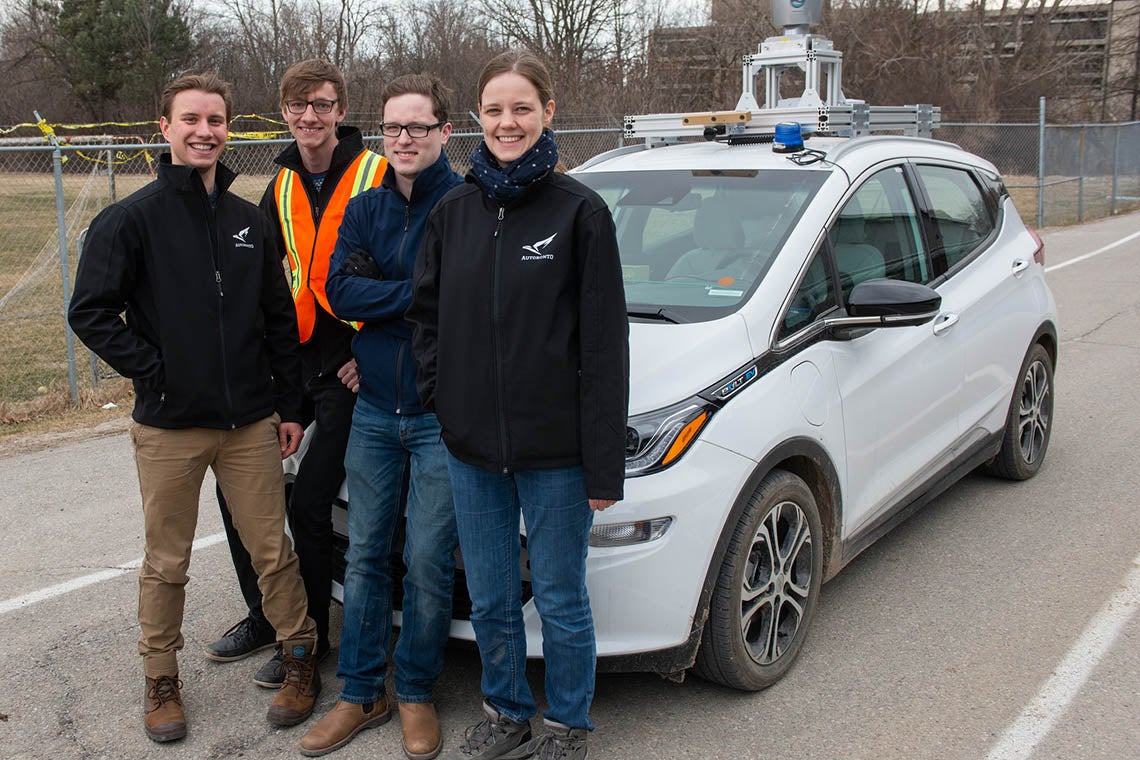 The hardest part was getting started.

The University of Toronto’s Faculty of Applied Science & Engineering’s aUToronto team, a group of undergraduate and graduate students selected to compete in the international Autodrive Challenge, is heading to its first competition in Yuma, Ariz. beginning on April 30. There they will be judged on their work converting a Chevrolet Bolt EV – which they’ve dubbed Zeus – into a self-driving car.

“Just getting the vehicle interface up and running was one of the most difficult challenges so far,” says Zachary Kroeze, aUToronto’s management lead and a postdoctoral researcher with Angela Schoellig, an assistant professor at U of T’s Institute for Aerospace Studies (UTIAS) and the team’s principal faculty adviser.

“We spent the first five months with Zeus trying to design the car to accept our inputs and start moving autonomously.”

Created by GM and SAE International, the Autodrive Challenge chose eight teams from universities across North America for the three-year competition. Now, at the end of Year 1, the teams will be required to complete three autonomous driving tasks: detecting and stopping at a stop sign, lane-keeping while navigating tight turns, and avoiding obstacles by performing proper lane-change manoeuvres.

When the aUToronto delegation hits the ground in Yuma, their first task will be to recalibrate Zeus’s sensors, including several cameras and a 3D LIDAR, before undergoing a technical inspection by the judges. Although driving conditions in the Arizona desert will be nothing like their test track in north Toronto, the team leads feel ready for anything.

“We’ve designed our systems to be as agnostic as possible to environmental conditions. Our system is designed to be robust in different road conditions, dust, and direct sunlight,” says technical team lead Keenan Burnett, a master’s of science candidate at UTIAS. “We’ve also done our best to future-proof our systems – for example, our lane detection modules are designed to handle a wide variety of scenarios that you’d never see on a normal highway.”

Future-proofing has been integral to their initial designs, with aUToronto’s senior autonomy architect Mona Gridseth, a PhD candiate at UTIAS, estimating that 80 to 90 per cent of the software they’ve developed will be reusable for the tasks they’ll have to complete at the Year 2 and Year 3 competitions.

“We’ve written our algorithms to be simple and elegant enough to run quickly on our server,” she says. “I’m really excited to get out there and show the judges what we’ve built. I think we all are.”

“From the beginning we’ve been looking at the challenge from a robotics perspective, rather than an automotive perspective,” says Burnett. “Our team took the approach of designing a robot to complete driving tasks really well. That’s unique.”