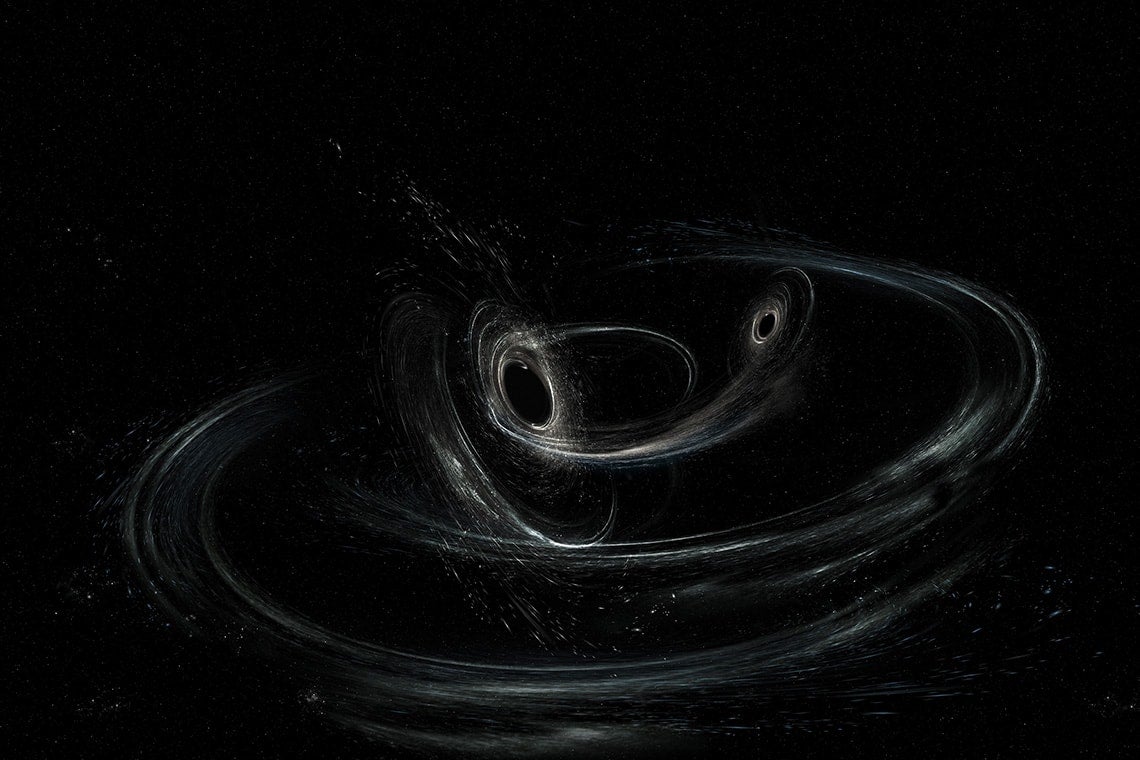 Illustration shows two merging black holes similar to those detected by LIGO. The black holes are spinning in a non-aligned fashion with different orientations (courtesy of LIGO/Caltech/MIT/Sonoma State/Aurore Simonnet)

Three U.S. researchers were awarded the Nobel Prize in physics on Tuesday for their discovery of gravitational waves, ripples in space-time. Rainer Weiss, a professor at the Massachusetts Institute of Technology, shared the prize with Kip Thorne and Barry Barish, both of the California Institute of Technology.

Albert Einstein had described gravitational waves in his theory of general relativity more than a century ago, but doubted their existence. It was only in 2015 that the waves were directly observed for the first time.

The research that made the discovery possible was the result of teamwork by many scientists around the world, including from the University of Toronto.

It was a breakthrough many years in the making that has vast implications for our understanding of the universe, says Ue-Li Pen, a professor in U of T's department of physics and director of the Canadian Institute for Theoretical Astrophysics (CITA).

He saluted the Nobel committee's decision. “The discovery capped decades of intense research and opened an entirely new means of observing the universe, which will produce marvellous new insights for decades to come,” he said. “CITA, CIFAR (the Canadian Institute for Advanced Research), and the University of Toronto are proud to have played a small part in these accomplishments through computer calculations of merging black holes and contributions to identification and characterization of the gravitational wave events.”

When reached by phone by the Nobel committee, Dr. Weiss of MIT said he saw the award as recognition for the work of about 1,000 people over “I hate to say it – 40 years.” One University of Chicago cosmologist was more emphatic: “It took a village and 100 years to do this.”

Scientists from 20 countries collaborated on the Laser Interferometer Gravitational-Wave Observatory (LIGO), which operates twin detectors more than 3,000 kilometres apart – one in Livingston, La. and the other in Hanford, Wash. Two years ago, LIGO scientists recorded gravitational waves caused by the collision of two massive black holes a billion light years away.

A video, made with the input of U of T researchers, of what a pair of colliding black holes would look like up close. The video was featured in the Nobel Prize announcement on Tuesday.

Harald Pfeiffer, an associate professor at the Canadian Institute for Theoretical Astrophysics in the Faculty of Arts & Science, leads the team of U of T researchers who provided Canada's contribution to the LIGO project.

“There's a few fundamental difficulties, but the easiest to explain is the experimental challenge,” he told U of T News on the phone from Germany. “When gravitational waves pass by Earth, they change length a lot. The change is absolutely, ridiculously tiny. Over the length of the LIGO instruments – four-kilometre-long arms – the change was one hundred millionth the size of an atom.”

One difficulty was building a gadget precise enough to detect a phenomenon on the scale of one-10,000th the size of an atomic nucleus. The other challenge was determining exactly what to look for. That's where U of T researchers came in.

The team was largely responsible for conducting simulations of black hole collisions on high-performance supercomputers, which were required because of the complexity of the equations and necessity for absolute precision. They computed gravitational waveform, the shape of the signals for which LIGO searches. The U of T researchers banked thousands of collisions to create “pattern templates,” giving scientists a better idea of what to look for and how to interpret their findings. 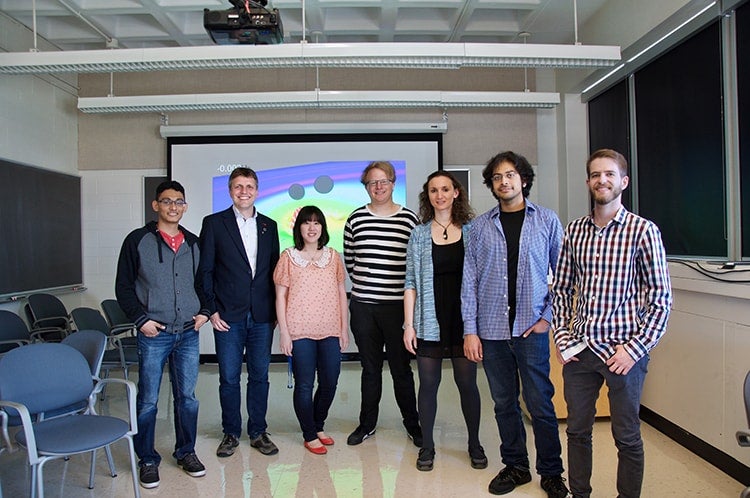 “If you know the shape of the signal you're looking for, it's like knowing the colour of a needle in a haystack. It's easier to find,” Pfeiffer explained in an interview with U of T News last year. The pattern templates also make the research more efficient by telling scientists right away whether they have observed a significant event.

Since the discovery in 2015, the CITA team took on a leading role characterizing gravitational waves by mass and spin.

They are currently working on neutron stars, another source of gravitational waves. They are also trying to fine-tune their calculations in simulations for higher-sensitivity detectors.

“We are very proud to have been part of this whole collaboration that has contributed to the Nobel Prize,” Pfeiffer said.