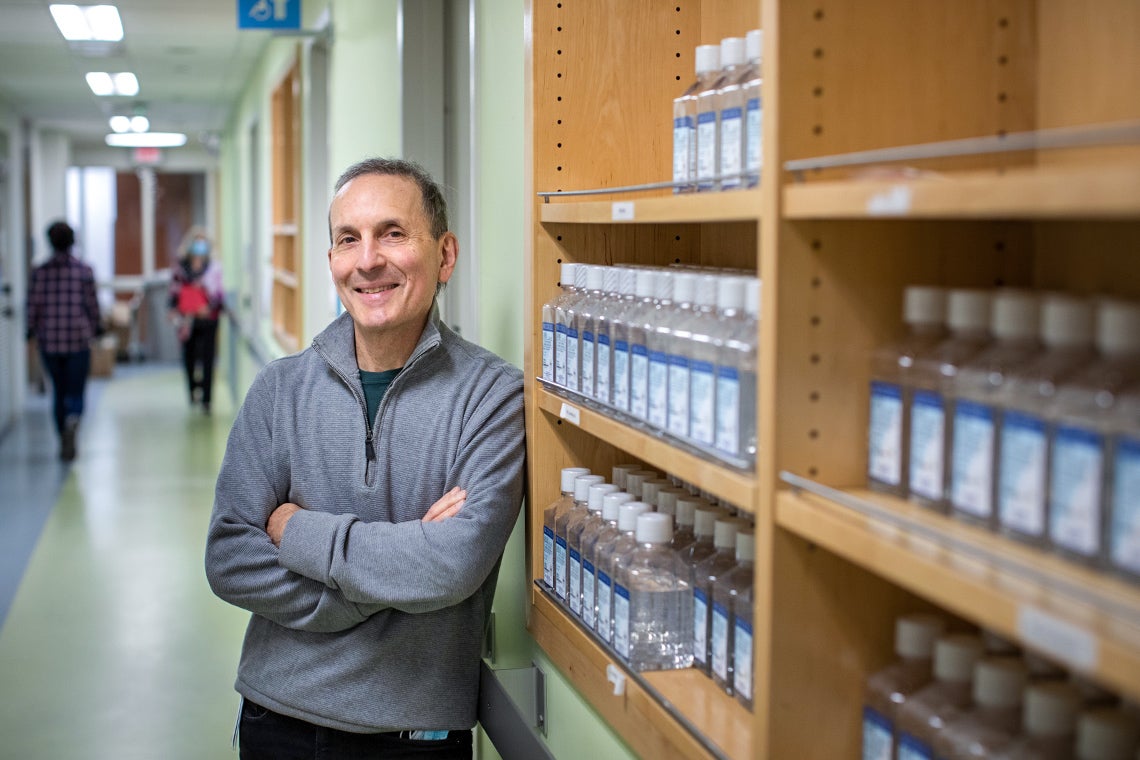 A scientist at the University of Toronto has been jointly awarded a 2021 Canada Gairdner International Award for research that has helped revolutionize treatments for type 2 diabetes, obesity and intestinal disorders.

Daniel Drucker receives the honour with Joel Habener of Harvard University and Massachusetts General Hospital, and Jens Juul Holst of the University of Copenhagen, for research on glucagon-like peptides – hormones that emanate from the gut to control insulin and glucagon, which work in tandem to balance sugar levels throughout the body.

The award comes as U of T celebrates the 100th anniversary of the discovery of insulin, a finding that paved the way for a century of ground-breaking research at the university and its partner hospitals – and just a week before the Insulin100 global symposium.

“I am extremely excited and honoured that the Gairdner Foundation has recognized our collective work on the glucagon-like peptides, and its translational importance for the treatment of metabolic disorders," said Drucker, a professor in the department of medicine at the Temerty Faculty of Medicine and a senior scientist at the Lunenfeld-Tanenbaum Research Institute at Sinai Health.

“I am also very grateful for the dozens of contributions made by so many talented trainees that I have been privileged to work with at the University of Toronto.”

Working both independently and collaboratively over more than four decades, Holst, Habener and Drucker discovered the peptides known as GLP-1 and GLP-2, detailed their molecular and physiological effects in cells and animals and translated those findings in human studies that have led to several new classes of drugs.

Medications based on GLP-1 have begun to significantly improve the care of people living with type 2 diabetes and obesity – conditions that have historically suffered from few or suboptimal treatments. More than 100 million people with type 2 diabetes have been treated with a GLP-1 analogue or a DPP-4 inhibitor, a class of drugs that prevents the breakdown of GLP-1 and GLP-2 and thereby helps improve blood sugar control.

Drugs based on GLP-2, meanwhile, can improve nutrient absorption in people with short-bowel syndrome, eliminating the need for intravenous feeding in some patients. And GLP-1-based peptides show promise as cardio-protective agents and in non-alcoholic fatty liver disease and neurodegenerative disorders.

“GLP-1 therapies have really advanced our treatment for diabetes and metabolic disorders, and GLP-2 can effectively address a huge unmet need in people with intestinal failure,” said Drucker, who will give an overview of his work at the Insulin100 symposium  “Let’s see what more they can do.”

The Gairdner Foundation was established in 1957 to recognize fundamental research that impacts human health, bestowing 395 awards to scientists from 35 countries. About a quarter of those recipients have later received Nobel Prizes.

The foundation increasingly honours recipients jointly in recognition of the collaborative nature of scientific research and with an eye on human impact, which may only become clear over decades.

The scientific journey from the discovery of glucagon-like peptides to their application in several diseases is indeed one of incremental and cumulative change.

Holst made the initial observation that patients who had undergone intestinal surgery experienced a rise in insulin followed by a drop in blood sugar after eating – an early sign of links between the gut, sugar levels and the pancreas, which is the main site of insulin and glucagon production.

Holst later identified a type of glucagon in blood that originated in the gut but was different from glucagon made in the pancreas.

Habener began work around the same time that led to the discovery of glucagon-like peptides. He used pancreatic cells from monkfish to show that glucagon and another hormone were genetically encoded in those cells as larger, precursor hormones.

He later found that a precursor called proglucagon included amino acid sequences for two related hormones, and through further work in mammals characterized these peptides – now known as GLP-1 and GLP-2.

Drucker joined Habener’s lab as a post-doctoral researcher in the mid-1980s and helped detail the biological function and systemic effects of the peptides. The scientists later observed that gut cells release GLP-1 into the blood in response to food – increasing insulin release in the pancreas and tempering glucagon, and also slowing digestion and decreasing appetite.

The results suggested that boosting GLP-1 might improve the glucose-dependent release of insulin in people with type 2 diabetes. Clinical tests by Holst and others confirmed this suspicion and led to drugs known as GLP-1 agonists, now a staple in type 2 diabetes management.

Drucker then further detailed the workings of GLP-2, which also arises in the gut as a response to food. He showed, in collaboration with Patricia Brubaker in U of T’s department of physiology and department of medicine, that the main role of GLP-2 is to support the growth and health of intestinal cells that enable food absorption. This led to a new treatment for short-bowel syndrome.

Drucker also uncovered the workings of GLP-1 in the brain and heart, as well as the circulatory and immune systems, opening new lines of investigation. His work, together with findings from Holst and others, also led directly to the development of dipeptidyl peptidase-4 (DPP-4) inhibitors.

Drucker attributes much of his success to a focus on research questions with medical relevance, which he said followed naturally from his education as a physician and may have helped compensate for his relatively scant training in the basic sciences.

“Many scientists are better trained, but I’ve always kept one eye on unmet clinical needs and chosen research experiments accordingly,” said Drucker, who counts other clinician-scientists such as Habener – and former U of T department of medicine chairs Charles Hollenberg and Gerard Burrow – as key mentors.

Drucker also acknowledges the research contributions of his many trainees and colleagues, as well as some good fortune – including his arrival in Boston just as Habener’s lab shifted focus from thyroid function to glucagon.

Gary Lewis, director of the Banting and Best Diabetes Centre at U of T and a physician-scientist, has known Drucker for three decades and highlights his methodical approach to research.

“Dan understands better than most that true scientific advances are a marathon, not a sprint,” said Lewis, who is a professor in the departments of medicine and physiology at the Temerty Faculty of Medicine and an endocrinologist at University Health Network.

“He has contributed decades of careful work, with a precision in controls and other aspects of the experimental process that few have. This is not work that made a quickly forgotten splash in high-profile journals, but it underpins the durable impact for which he is now being rewarded.”

Lewis also cites scientific integrity, or the unbiased testing of hypotheses, as key to Drucker’s work.

“Too many scientists are enthralled with the ideas behind their hypotheses, but Dan is resolute in letting the data speak.”

Lewis said Drucker brings an uncommon work ethic to both his research and pursuits outside the lab – an intensity that has yielded a breadth of knowledge in work with industry on effective treatments for patients.

“He is simply one of the greatest scientists this country has ever produced,” he said.

Trevor Young, dean of U of T’s Temerty Faculty of Medicine and a clinician-scientist, said the work by Holst, Habener and Drucker is a classic tale of scientific inquiry that runs from the bedside to the lab bench and back to patients.

“I’m reminded of insulin, and the drivers and mechanics of that discovery,” said Young. “This is a story of pursuit and perseverance, but also of measured observation and collaboration at many steps along the way. And it’s changing millions of lives.”