U of T's student weekly hires a public editor 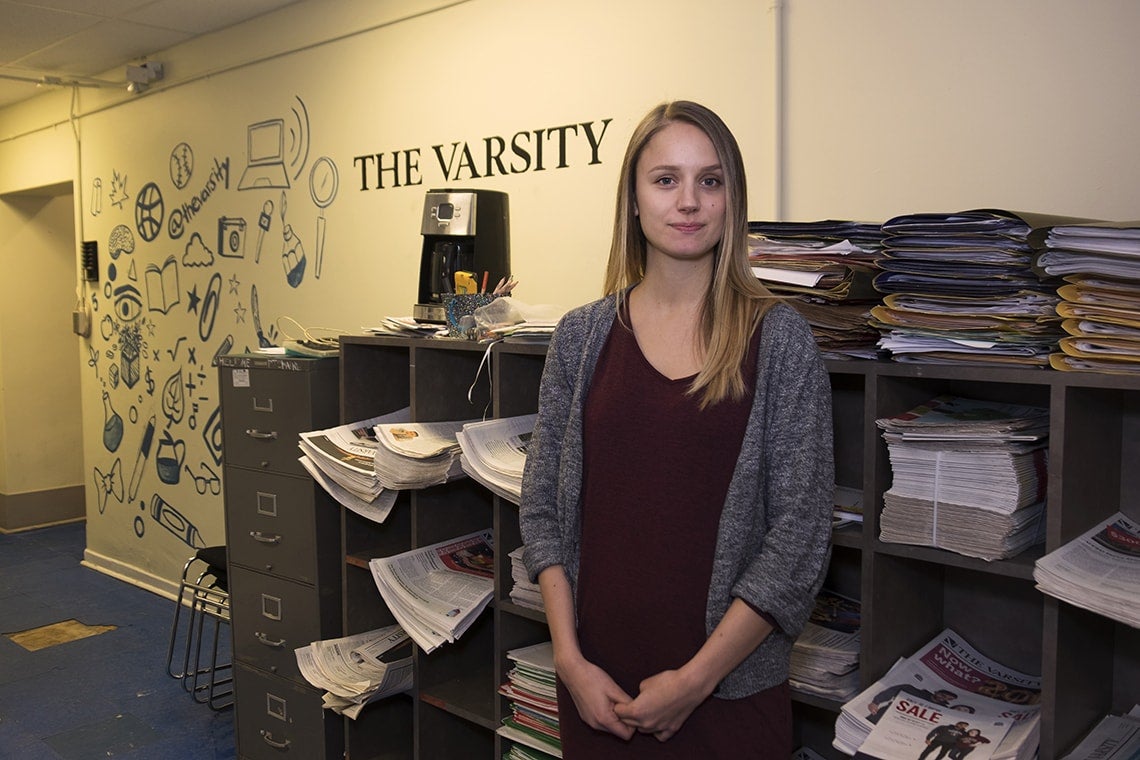 Sophie Borwein, a PhD student in political science, is the first-ever public editor at "The Varsity" (photo by Geoffrey Vendeville)

These are challenging times for journalism as politicians peddle “alternative facts” and good reporting is eclipsed by fake news.

“If there was ever a golden era of newspaper journalism, this isn’t it,” said Sophie Borwein, the first-ever public editor of The Varsity in a column in which she introduced herself to readers.

Although the decision to hire a public editor was in the works for over a year and had nothing to do with recent controversies, The Varsity’s editor-in-chief says it was an opportune time.

“I feel that student newspapers like The Varsity have an important role to play in setting a high standard of accountability to readers, especially given that trust in the media is currently low,” said Alex McKeen, The Varsity's editor-in-chief.

Borwein, a third-year PhD student in political science, is in charge of hearing readers’ complaints to ensure that the student weekly – with a student audience of 87,000 across all three campuses – always meets the standards of honesty, accuracy and fairness laid out in the paper’s code of ethics.

She is believed to be the only public editor of a student paper in Canada. Even among major Canadian news outlets, there are few like her. Only The Toronto Star, The Globe and Mail, and the Brunswick News group have public editors, while CBC and Radio-Canada have ombudsmen, J-Source reported in a story about Borwein’s new job.

U of T News met with Borwein at The Varsity’s office to hear about her plans as public editor and her thoughts on the state of journalism today.

What makes a good public editor?

Taking readers’ concerns seriously. I spoke to Kathy English about this recently, and she said it’s sort of like being a judge. You have to trust your instinct against the code you’re expected to be upholding, and then you have to make a decision. And you have to recognize that not everyone is going to be happy with it, but you have to stick to it.

Why do you think there was so much interest in your appointment?

I think it's the timing. Everybody is grappling with the question of what to do about these scary trends in journalism.

And for publications like The Varsity that have been around for a very long time that to me is its big advantage: the longevity, the consistency, the ability to show that over time you've upheld certain standards. I think this is just another piece of that.

What do you mean by “scary trends?”

The funny thing about this job is that The Varsity has been looking for a public editor for a while now so it wasn't a reaction to the most recent trends in the U.S.

But, I mean, it's scary out there for media.

If you can have a press secretary who gets up there and says we have a different set of facts for you, I don't know what you do with that.

And I don't know what you do with a candidate and now a president who has a different view of reality. It breaks every basic understanding of a journalist's role. I don't envy the media, in the U.S. in particular, which is grappling with this question of how helpful it is to keep calling Donald Trump a liar.

There’s obviously been a lot of questions about whether it’s still helpful to call him out on all his lies in a toxic environment where readers are predisposed not to trust media outlets. Politicians can use that as further fuel to say it’s partisan reporting.

Read more about some of the scary trends

In your first column for The Varsity, you said this isn’t exactly a “golden age” of journalism and that the public distrusts the media. Why is there this mistrust?

First of all, I'd qualify that by saying what the evidence is showing is a lack of trust in the United States and actually more trust in Canada. It's not outstanding, but we're doing better in terms of why I think it's a complicated picture.

I've seen some interesting data in the U.S., for instance, showing just how partisan the various news media sources are seen to be. If you're a Democrat, you may only read The New York Times, CNN or NPR. For Republicans, it's Fox News.

And they think that each other's media can't be trusted so there's this really big polarization.

There are other worrying trends: fake news, Donald Trump. I think some of those trends are a bit more obvious in the U.S.

As for Canada, I don't have a good answer for why we seem to have better trust. I'd like to think that having a good public broadcaster helps.

What does your job at The Varsity entail?

I will definitely be writing a column. We haven't quite figured out how consistently.

I expect that as people understand my role better, more concerns people have will get funneled my way. I’ll be writing a column addressing those concerns like the columns by the Star’s public editor Kathy English or the [New York] Times’ Liz Spayd.

Until then, for the next little while, I'd like to do a little bit of an education campaign in the sense of writing about what goes into a news story at The Varsity – where news stories come from, how we decide what's news, and who we talk to.

The reason I'd like to do that is that I think most people don't always know, and there's sometimes confusion about the difference between a news and comment piece.