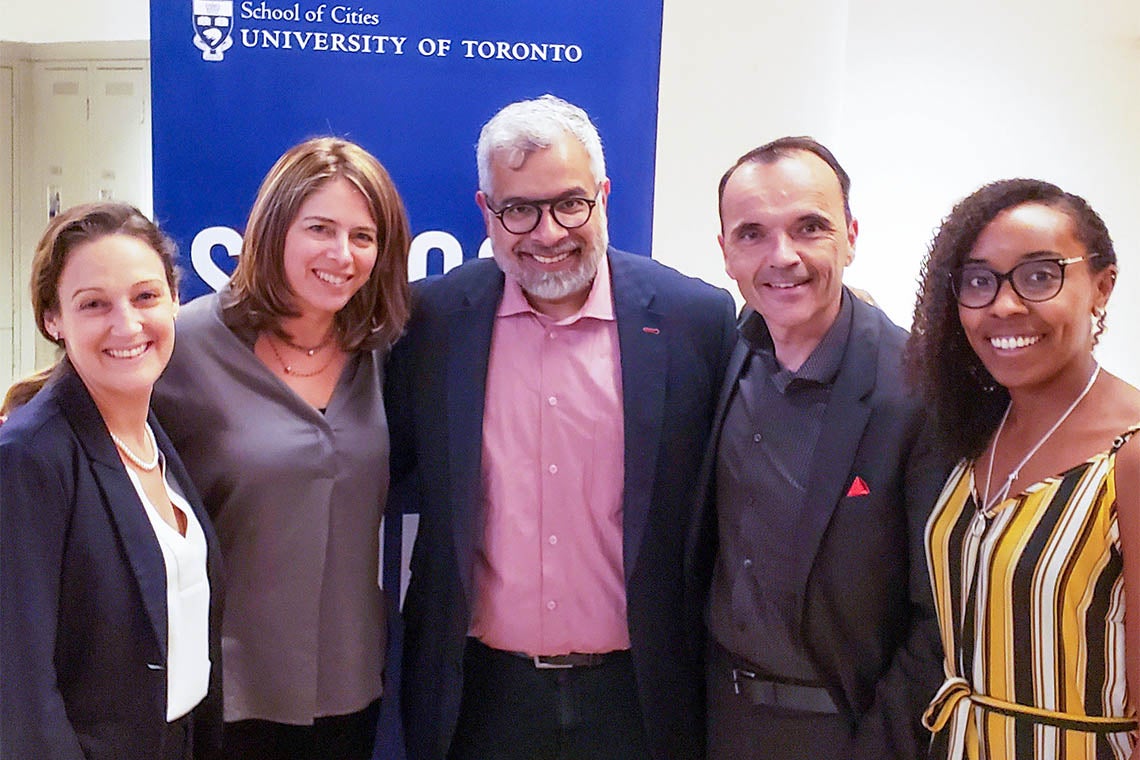 From left, U of T's Lara Muldoon, Shauna Brail and Nouman Ashraf; United Way of Greater Toronto president and CEO Daniele Zanotti; and Nakia Lee-Foon, a PhD candidate at U of T (photo by Nina Haikara)

Nouman Ashraf, an assistant professor of organizational behaviour and director of equity, diversity and inclusion at the University of Toronto’s Rotman School of Management, prepares to start his seminar by connecting his laptop to the teaching podium.

“We Are Family” booms from the classroom’s speakers and draws a light chuckle from the participants gathered as Sister Sledge sings:

It’s a fitting start to the first session held last week of U of T’s School of Cities’ Community-Builders Fellowship program, in partnership with the United Way of Greater Toronto. Over the next nine months, six teams of three will be working on an initiative or project related to neighbourhood change in the Toronto region.

“The Community-Builders Fellowship is a really important initiative,” said Shauna Brail, an associate professor of urban studies and the school’s associate director of partnerships and outreach, in her welcome to the first cohort of community fellows.

“The university has a lot of resources that are not readily available to outside community. We thought, if we leverage some of our resources – including our very talented human resources – we can create a new pathway into the university that will not only help you in developing neighbourhood change, but that also helps us in building new capacity.”

The proposed team projects include:

“Thanks for bringing your excitement to partner with us,” said Ashraf, faculty lead for the program’s curriculum. “This is a journey we’ll take together.”

Ashraf told fellows they’ll learn leadership frameworks and models to apply to their experiences, as well as take their project from idea to application in the community.

Nakia Lee-Foon, a PhD candidate in the social and behavioural health sciences division of U of T's Dalla Lana School of Public Health, will be working with the community-based teams, pairing them with mentors and supporting their project outcomes.

“This program supports novel, community-informed projects that can build individuals and their community members' capabilities for years to come,” she said. “Mentorship is a vital component. It can help each group refine their project, gain access to various resources that may be inaccessible to them, and provide mentors with the opportunity to gain new partnerships.”

To close the first seminar, United Way of Greater Toronto’s president and CEO Daniele Zanotti took part in a fireside chat with Brail.

He shared his experiences as an Italian-Canadian kid growing-up in Toronto’s Keele and Lawrence neighbourhood. As a child he expected he would become a factory worker like his father.

Zanotti said his path wasn’t linear and he stumbled in and out of a lot of jobs. It was a role at Progress Place, a community centre for those living with mental illness, that prompted him to leave his creative writing degree and pursue his master’s at U of T’s Factor-Inwentash Faculty of Social Work.

“The one thing about leadership that I bleed, that I hope you never lose, is compassion. When you don’t feel, get out of community work.”

He described Toronto today as a series of islands segregated by income. An individual’s opportunities are limited by race, immigration status and postal code.

Zanotti encouraged fellows to be the “roar which lies on the other side of silence,” a quote from George Eliot’s Middlemarch that a community member once wrote on a Post-it and handed to him years ago.

Zanotti also described the whipped egg yolk, sugar and espresso zabaglione his uncle used to make: “Part of leadership is having the courage to break some eggs.”