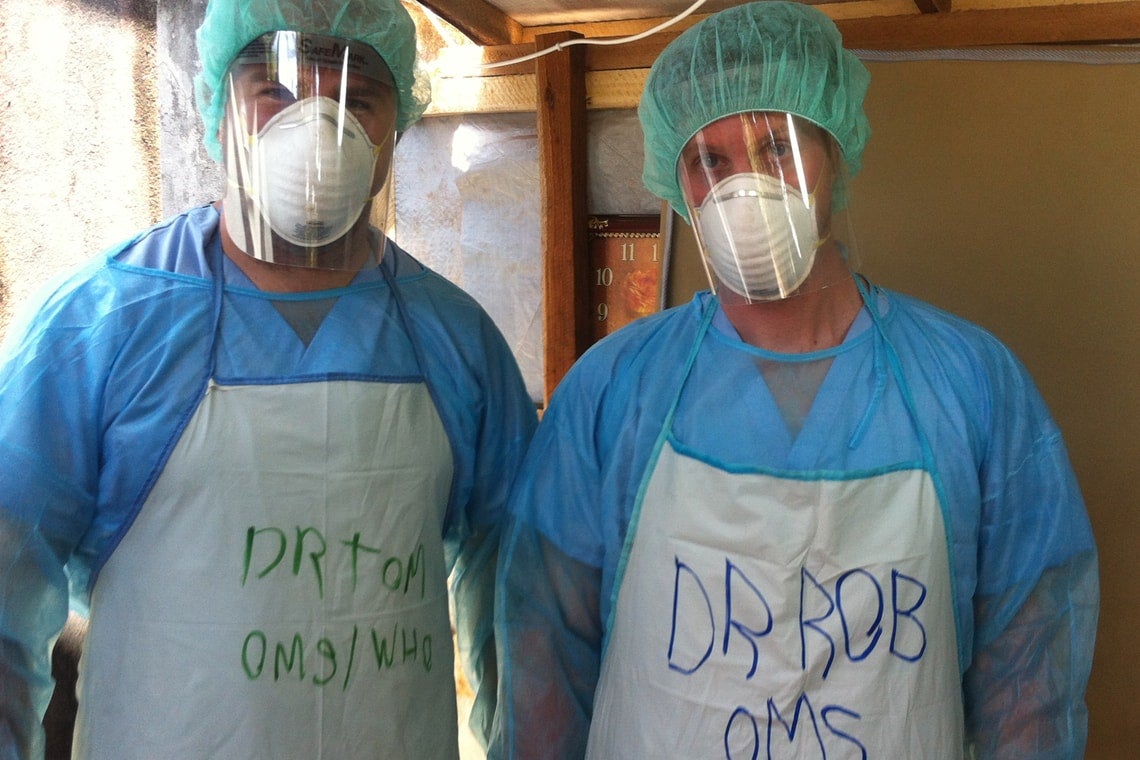 Dr. Rob Fowler (right), is the 2017 recipient of the Teasdale-Corti Humanitarian Award. He's photographed above with Dr. Tom Fletcher (left), treating Ebola patients in Guinea in 2014 (photo courtesy of Royal College of Physicians and Surgeons)

The Royal College of Physicians and Surgeons of Canada is honouring a U of T physician for his first response efforts during the Ebola outbreak in West Africa three years ago.

Dr. Rob Fowler is the 2017 recipient of the Teasdale-Corti Humanitarian Award, given to a Canadian physician to acknowledge their work in health care or emergency medical services at personal risk to themselves. Fowler, an associate professor at U of T's Institute of Health Policy, Management and Evaluation (IHPME), is well-known for his efforts during the Ebola outbreak early 2014. In the midst of a one year sabbatical, during which he had chosen to work with the World Health Organization (WHO) in Geneva, he soon found himself on the front-line of what would come to be known as one of the most serious epidemics of infectious disease in modern history.

The previous method of treating patients with the Ebola virus, which causes severe dehydration in those infected, was often not aggressive enough to successfully nurse patients back to health, the common belief was that these patients were destined to die.

“In the early stages of the outbreak, many health care workers and organizations were very concerned about even placing in an IV drip to sustain hydration due to the risk of infection,” says Fowler, who is also program director of the clinical epidemiology and health-care research stream at the University of Toronto.

Providing adequate rehydration during the course of the disease proved difficult without proper equipment or clinical protocols in place but was necessary in order to prevent critical damage to the cardiovascular system or key organs like the kidneys.

“We thought this approach would help patients and could be done safely so we advocated for more aggressive therapy for these patients,” says Fowler. “We then moved on to advocating for blood tests in Ebola treatment units, something that had rarely been done before as there were no lab testing facilities for these units. We wanted to see what exactly was making people sick, which organs were shutting down, and how we could effectively treat them. Essentially, we advocated for the best medical care we could provide.” 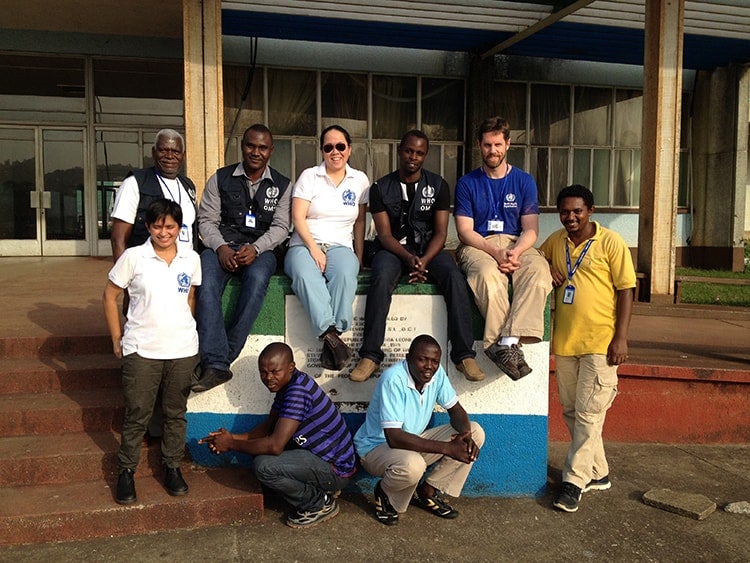 Dr. Rob Fowler with members of the WHO Clinical Management Training and Mentorship Team in Freetown, Sierra Leone, December 2014 (photo courtesy of Royal College of Physicians and Surgeons)

Fowler alongside his colleagues from Medicins Sans Frontieres (MSF) and the WHO continued to push for a more supportive method of care that would enable the patient to rid their body of the Ebola virus on their own.  Seeking to alter the management of the epidemic, Fowler and his colleagues in West Africa published in the New England Journal of Medicine about their early experience with the disease as a way to advocate for continued resources and improved care.

It did take many months – well into the outbreak – before clinicians working in the affected countries were able to obtain standard equipment to support acute medical care sufficiently, with only one unit in West Africa able to provide full critical care with ventilation support and dialysis machines.

“These are therapies that could save people’s lives, but they are just not usually available in most West African settings,” says Fowler.

“This is never an individual award, though it is a privilege to be acknowledged for this work, which speaks to the Canadian response, of which I was just a part. This is really an endorsement of the teams that do this kind of work every day,” says Fowler, noting that this was and still is a collaborative effort.

“I am humbled to be the recipient of the Teasdale-Corti Award, and to know that I am joining a list of recognized physicians who have done outstanding work in their fields.”