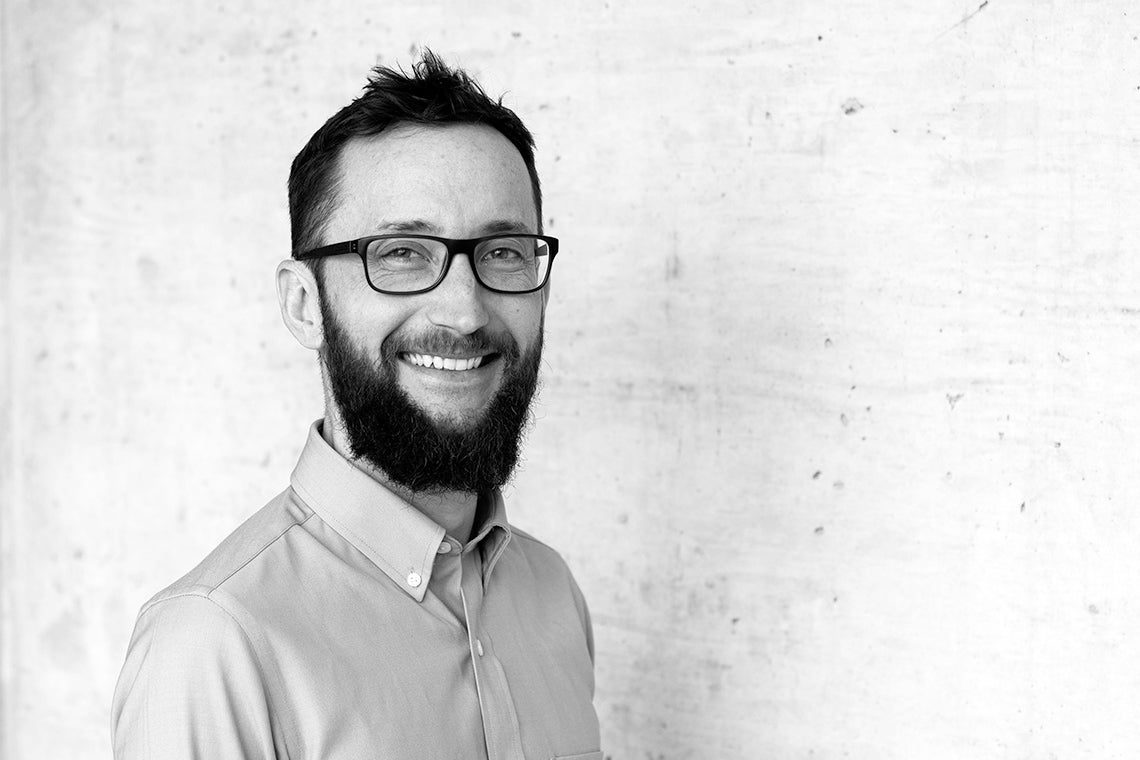 In September of 2019, Peter Wittek, an assistant professor at the University of Toronto, went missing during a mountaineering expedition in the Himalayas after reportedly being caught in an avalanche. A search and rescue mission was launched but the conditions were very difficult and Wittek was not found.

“Peter’s loss is keenly felt,” said Professor Ken Corts, acting dean of the Rotman School of Management. “He was the Founding Academic Director of the CDL Quantum Stream, a valued instructor in the MMA program, data scientist in residence with the TD Management Data and Analytics Lab, an exceptional contributor to Rotman and U of T – and a wonderful colleague.”

A ceremony to remember Wittek will take place on Feb. 3 from 3 to 4:30 pm in Desautels Hall at the Rotman School of Management.

Quantum computing and quantum machine learning – an emerging field that counted Wittek as one of its few experts – was the topic of his final interview in Rotman Management Magazine. It is reprinted below:

You oversee the Creative Destruction Lab’s Quantum stream, which seeks entrepreneurs pursuing commercial opportunities at the intersection of quantum computing and machine learning. What do those opportunities look like?

We’ve been running this stream for three years now, and we were definitely the first to do this in an organized way. However, the focus has shifted slightly. We are now interested in looking at any application of quantum computing.

These are still very early days for quantum computing. To give you a sense of where we are at, some people say it’s like the state of digital computing in the 1950s, but I’d say it’s more like the 1930s. We don’t even agree yet on what the architecture should look like and, as a result, we are very limited with respect to the kind of applications we can build.

As a result, focusing on quantum is still quite risky. Nevertheless, so far we have had 45 companies complete our program. Not all of them survived, but a good dozen of them have raised funding. If you look at the general survival rate for AI start-ups, our record is roughly the same – and given how new this technology is, that is pretty amazing.

What are the successful start-ups doing? Can you give an example of the type of problems they’re looking to solve?

At the moment I would say the main application areas are logistics and supply chain. Another promising area is life sciences, where all sorts of things can be optimized with this technology. For instance, one of our companies, Protein-Qure, is folding proteins with quantum computers.

Finance is another attractive area for these applications. In the last cohort we had a company that figured out a small niche problem where they had both the data and the expertise to provide something new and innovative; they are in the process of raising money right now. The other area where quantum makes a lot of sense is in material discovery. The reason we ever even thought of building these computers was to understand quantum materials, back in the 1980s. Today, one of our companies is figuring out how to discover new materials using quantum processing units instead of traditional supercomputers.

We have a company called Agnostic, which is doing encryption and obfuscation for quantum computers. Right now IBM, Rigetti Computing and D-Wave Systems are building quantum computers for individual users. They have access to everything that you do on the computer and can see all the data that you’re sending. But if you’re building a commercial application, obviously you will want to hide that. Agnostic addresses this problem by obfuscating the code you are running. One application we’ve seen in the life sciences is a company called EigenMed, which addresses primary care. They provide novel machine learning algorithms for primary care by using quantum-enhanced sampling algorithms.

We also seed companies that don’t end up using quantum computing. They might try out a bunch of things and discover that it doesn’t work for the application they have in mind, and they end up being 100 per cent “classical.” StratumAI is an example of this. It uses machine learning to map out the distribution of ore bodies under the ground. The mining industry is completely underserved by technology, and this company figured out that to beat the state-of-the-art by a significant margin, it didn’t even need quantum. They just used classical machine learning – and they already have million dollar contracts.

Which industries will be most affected by this technology?

Life sciences will be huge because, as indicated, it often has complex networks and probability distributions, and these are very difficult to analyze with classical computers. The way quantum computers work, this seems to be a very good fit, so that is where I expect the first killer app to come from. One company, Entropica Labs, is looking at various interactions of several genomes to identify how the combined effects cause certain types of disease. This is exactly the sort of problem that is a great fit for a quantum computer.

You touched on quantum applications in primary care. If I walked into a doctor’s office, how would that affect me?

It’s tricky because, like mining, primary care is vastly underserved by technology. So, if you were to use any machine learning, you would only do better. But EigenMed was actually founded by an MD. He realized that there are certain machine learning methods that we don’t use simply because their computational requirements are too high – but that they happen to be a very good fit for primary care, because the questions you can ask the computer are similar to what a GP would ask.

For instance, if a patient walks in with a bunch of symptoms, you can ask, “What is the most likely disease?” and “What are the most likely other symptoms that I should verify to make sure it is what I suspect?” These are the kinds of probabilistic questions that are hard to ask on current neural network architectures, but they are exactly the kind of questions that probabilistic graphical models handle well.

Are physicians and other health-care providers open to embracing this technology, or do they feel threatened by it?

First of all, health care is a heavily regulated market, so you need approval for everything. That’s not always easy to get and, as a result, it can be very difficult to obtain data. This is the same problem that any machine learning company faces. Fine, they have this excellent piece of technology and they’ve mastered it, but if you don’t have any good data, you don’t have a company. I see that as the biggest obstacle to machine learning-based progress in health care and life sciences.

You have said that QML has the potential to bring about “the next wave of technology shock.” Any predictions as to what that might look like?

I think it’s going to be similar to what happened with deep learning. The academic breakthrough happened about nine years ago, but it took a long time to get into the public discussion. This is currently happening with AI – which, at its core, is actually just very simple pattern recognition. It’s almost embarrassing how simplistic AI is – and yet it is already changing entire industries.

Quantum is next – not just quantum machine learning but quantum computing in general. Breakthroughs are happening every day, both on the hardware side and in the kind of algorithms you can build with quantum computers. But it’s going to take another 10 years until it gets into public discussions and starts to disrupt industries. The companies we are seeding today are going to be the ones that eventually disrupt industries.

Alibaba is one of the companies at the forefront of embracing quantum, having already committed $15 billion to it. What is Alibaba after?

First of all, I want to say a huge thank you to Alibaba because the moment it made that commitment, everyone woke up and said, “Hey, look: the Chinese are getting into quantum computing!” Almost immediately, the U.S. government allocated $1.3 billion to invest in and develop quantum computers, and a new initiative is also coming together in Canada.

The world’s oldest commercial quantum computing company is actually from Canada: D-Wave Systems started in 1999 in British Columbia. Over its 20-year history, it managed to raise over $200 million. Then Alibaba came along and announced it was committing $15 billion to quantum and this completely changed the mindset. People suddenly recognized that there’s a lot of potential in this area.

What does Alibaba want from quantum? You could ask the same question of Google, which is also building a quantum computer. For them, it’s because they want to make their search and advertisement placement even better than it already is. Eventually, this will be integrated into their core business. I think Alibaba is looking to do something similar. As indicated, one of the main application areas for quantum is logistics and supply chain. Alibaba has a lot more traffic than Amazon. Its orders are smaller, but the volume of goods going through its warehouses is actually much larger. Any kind of improved optimization it can achieve will translate into millions of dollars in savings. My bet is that Alibaba’s use of quantum will be applied to something that is critical to its core operation.

The mission of CDL’s Quantum stream is that, by 2022, it will have produced more revenue-generating quantum software companies than the rest of the world combined. What is the biggest challenge you face in making that a reality?

People are really waking up to all of this. There is already a venture capital firm that focuses exclusively on quantum technologies. So, the competition is steep, but we are definitely leading in terms of the number of companies created. In Canada, the investment community is a bit slow to put money into these ventures. But every year we are recruiting better and better people and the cohorts are more and more focused – and, as a result, I think we are going to see more and more success stories.

It seems like everyone is interested in quantum and they are thinking about investing in it, but they are all waiting for somebody else to make the first move. I’m waiting for that barrier to break and, in the meantime, we are making progress. Xanadu just raised $32 million in Series A financing, which indicates that it has shown progress in building its business model and demonstrated the potential to grow and generate revenue. ProteinQure raised a seed of around $4 million dollars. And another company, BlackBrane, raised $2 million. So, already, there are some very decent financing rounds happening around quantum. It will take lots of hard work, but I believe we will reach our goal.

Peter Wittek was an Assistant Professor at the Rotman School of Management and Founding Academic Director of the Creative Destruction Lab’s Quantum stream. The author of Quantum Machine Learning: What Quantum Computing Means to Data Mining (Academic Press, 2016), he was also a Faculty Affiliate at the Vector Institute for Artificial Intelligence and the Perimeter Institute for Theoretical Physics.

This article appeared in the Winter 2020 issue of Rotman Management Magazine. Published by the University of Toronto’s Rotman School of Management, Rotman Management explores themes of interest to leaders, innovators and entrepreneurs.