U of T's first Black Grad celebration won't be the last, say organizers 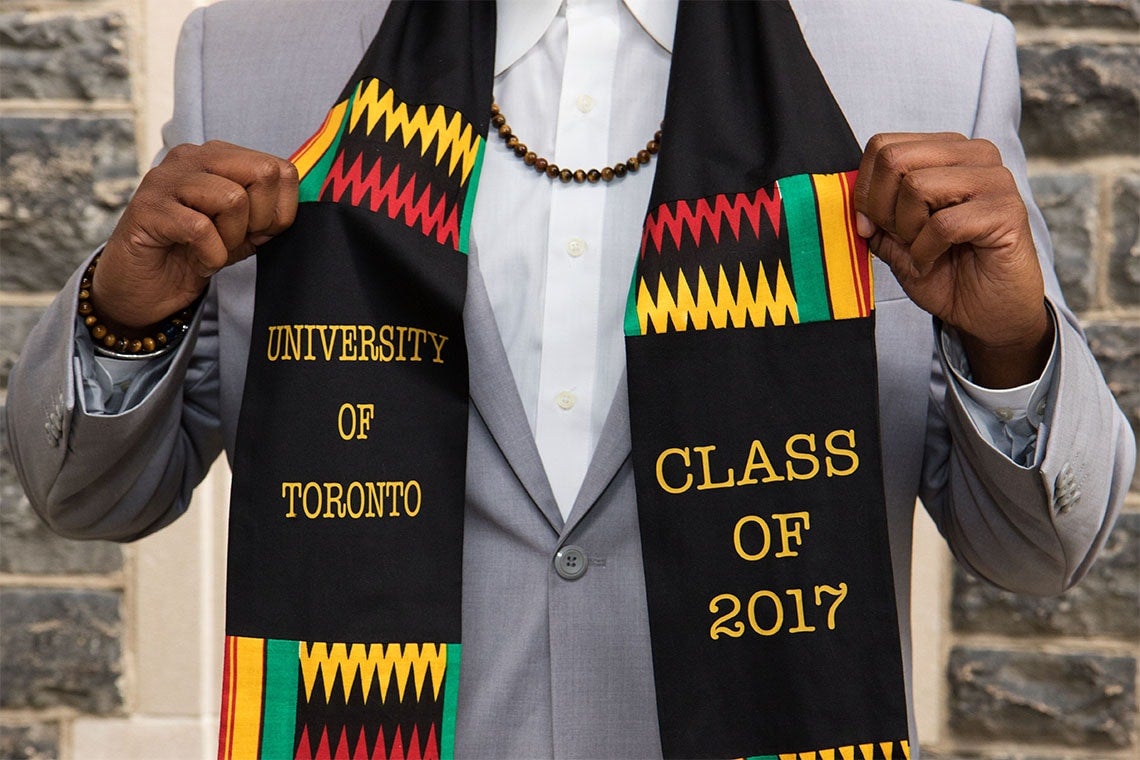 PhD graduate, Anthony Briggs, showing off the scarf his sister sewed for him as a grad gift (photo by Geoffrey Vendeville)

"This is a room full of possibility"

As the procession of U of T 2017 black graduates danced into Hart House's Great Hall to the Diana Ross song, “I'm Coming Out”, the room erupted with cheers and applause.

“How many of you got goosebumps as the graduates walked in?” asked Sandra Carnegie-Douglas, anti-racism and cultural diversity officer at U of T, as she addressed the crowd at Canada’s first-ever Black Grad celebration at U of T last night.

The student-organized Black Grad was a celebration of undergraduate and graduate students from U of T Mississauga, U of T Scarborough and the downtown Toronto campus who are graduating this year. Approximately 14,000 members of the Class of 2017 graduated in June, at 27 convocation ceremonies stretching across three weeks; another 4,000 will graduate at ceremonies in November.

Organizers say the event drew more than 300 people, including about 100 grads.

“To see our black grads celebrated with their family, friends and faculty to support them was really beautiful,” said Nasma Ahmed, the U of T student who organized Black Grad with her friend and 2017 psychology grad, Jessica Kirk and many other student volunteers.

Ahmed, who graduated on Monday with an undergraduate degree in public policy and city studies at University of Toronto Scarborough, says she was inspired by a similar Black Grad celebration she attended at a university in California a couple of years ago. She says she felt U of T needed something similar.

“I think a lot of people just hadn’t ever been in a room like that, surrounded by community members and also other Black students they had never met before. It was beautiful to see people connecting, eating food and dancing,” she said. Cher Jones and her son, Kayne Munroe who is graduating with a degree in political science in November (photo by Geoffrey Vendeville)

Ashley Splawinski, a political science specialist and sexual diversity studies major who graduated on Friday, said that while she arrived at the event alone she knew she had a common link to the other Black grads and felt comforted by that. “Considering my experience during undergrad, and the ways I’ve felt in the classroom and outside the classroom, this was a great opportunity to be in a space and not feel othered,” said Splawinski who is starting her master’s in political science in the fall. Malia Omale, an undergrad majoring in evolutionary anthropology and American studies, called Black Grad a “milestone”. While she said she's not graduating until next spring, she came to Black Grad to recognize the achievements of other black students and find inspiration in the excellence of other students, black mentors and faculty members. Kidd said that the organizers should be very proud of the event. “We’ll keep it going for years.”

Huda Hassan, a PhD student in women and gender studies at U of T, delivered an opening keynote speech. She said, “Everyone in this room today sees you, acknowledges how much emotional, physical and mental work you did to be here”. U of T PhD student Huda Hassan (left) looks on as students hug at Black Grad. Hassan has helped other Black women apply to PhD programs (photo by Geoffrey Vendeville)

She said that although the room was a display of possibility, she also wanted to acknowledge who was missing. She reminded everyone in the room to consider all their peers, friends, and family members who were just as brilliant, hardworking and capable but who, because of systemic barriers, were unable to graduate even though they deserved to.

When Ahmed spoke to the group of grads prior to entering the Great Hall, she said, “I told them, ‘Yes, there are about a 100 of you, but we want more of you’.”

Throughout the evening, grads and their family mingled with leading scholars such as Alissa Trotz, associate professor of women and gender studies and director of the undergraduate Caribbean studies program at New College, and Professor Maydianne Andrade, vice-dean, Faculty Affairs and Equity, at U of T Scarborough.

Professor George Elliott Clarke, Canada's Parliamentary Poet Laureate, is out of the country. But he sent a message to all Black Grads:

“As an African-Canadian faculty member from historic Africadia (African-Nova Scotia), a descendant of slaves and those who fled slavery and struggled against it, and as a son of working-class
parents in Halifax, Nova Scotia, I think I may guess at – and not be incorrect – about some of the challenges that some of you have faced, and the obstacles you have overcome, to be where you are at today.  I congratulate you on your historic achievement.”