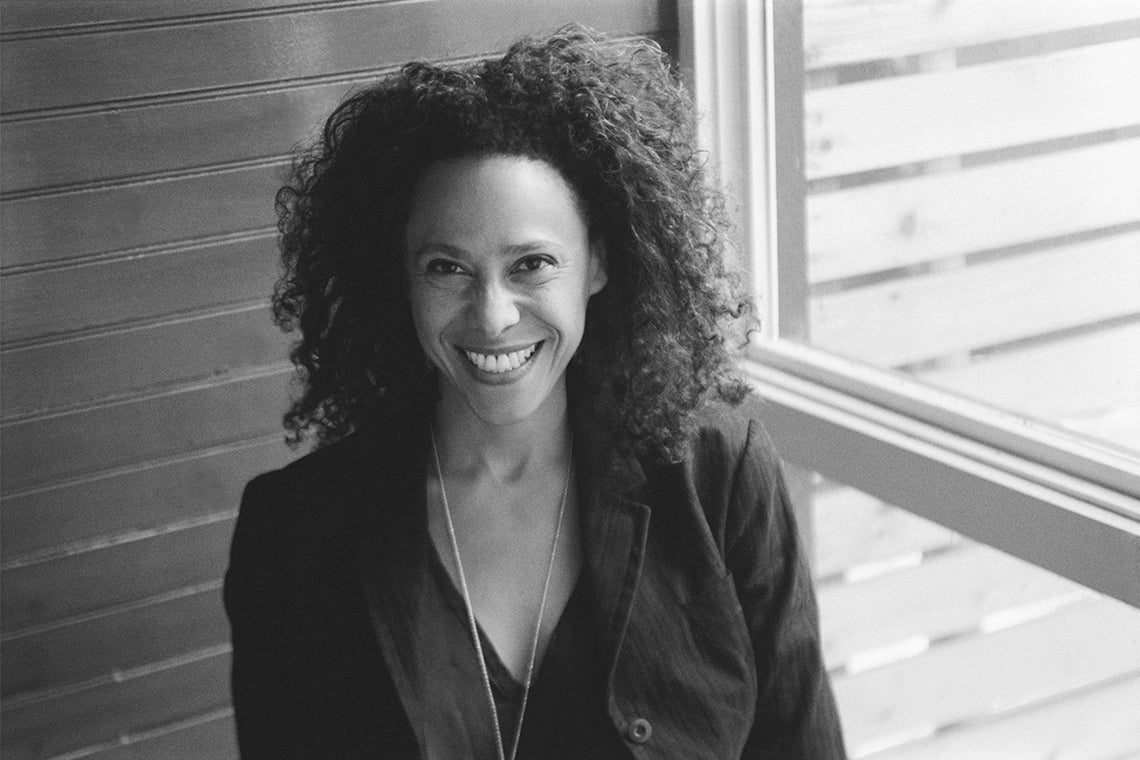 Beth Coleman, an associate professor at the Institute of Communication, Culture, Information and Technology at U of T Mississauga, is the inaugural director of the Black Research Network (photo by Brooke Williams)

A University of Toronto-wide initiative to support research excellence among Black faculty and students will launch on Oct. 8 with an online event featuring presentations from two outspoken leaders in the field of technology and social justice.

The Black Research Network – the first group of its kind in Canada – will host speeches by Ruha Benjamin, a professor of African American studies at Princeton University, and Timnit Gebru, the co-founder of Black in AI, a nonprofit that aims to boost the presence and visibility of Black people working in artificial intelligence.

Beth Coleman, an associate professor at the Institute of Communication, Culture, Information and Technology at U of T Mississauga and the network’s inaugural director, says she hopes the event will help raise awareness about the group and serve as an invitation for Black faculty, students and librarians to join.

The network was spearheaded last year by Coleman and four U of T colleagues: Rhonda McEwen, dean of U of T Mississauga; Maydianne Andrade, a professor of evolutionary biology at U of T Scarborough; Alissa Trotz, director of the Women & Gender Studies Institute; and Lisa Robinson, vice-dean, strategy and operations in the Temerty Faculty of Medicine.

U of T President Meric Gertler will join other senior university leaders in offering messages of support at the virtual event.

Coleman spoke recently with U of T News about the pioneering initiative and what it means for Black scholars at U of T.

How did the idea for the Black Research Network originate?

The idea emerged during last year’s racial reckoning and gelled during discussions around the university’s Anti-Black Racism Task Force. We know that Black researchers historically have faced significant barriers to their advancement in academia. We know, for example, they receive a lower percentage of federally funded grants. How do we parse that? Are there simply fewer Black researchers, so there are fewer research grants submitted? Or is there a problem with people assessing the merit of the applications?

We aim to build off the learnings from the Anti-Black Racism Task Force, in the sense of shifting the conversation from deficit to excellence – to supporting what we have and what we can grow. Ultimately, we hope the network will promote Black excellence at U of T and enhance the research capacity of Black scholars within the university and on the world stage.

Who can become involved?

Black-identified professors, librarians, post-docs, graduate students and undergraduates, though I don’t expect we will have much undergrad programming in the first year. We will also have space for non-Black colleagues committed to addressing anti-Black racism who wish to work alongside network members.

What are your first priorities for the network?

We will be setting up physical locations on the three campuses where researchers can assemble – to attend workshops, present papers or get together to hammer out a paper for publication.

One way to counterbalance the sense of isolation felt by many Black researchers is to bring them into conversations that are happening across disciplines and across the campuses. It gives them license to call people and say, “Hey, let’s talk. Could we collaborate?” We’re trying to build strong relationships across the university and across various kinds of research.

This year, we’re focusing on supporting research collaborations in data science and the Temerty Faculty of Medicine – partly because STEM has been historically a difficult place for Black researchers. We have $1 million to support research projects developed within the network but we are fundraising to support larger-scale research endeavours to enable the network to grow.

We’ll also focus on the “soft tissue” connections that need to be better supported, such as mentorship. We want to help people be successful in their work – whether it’s obtaining a research grant, finding a mentor or feeling that they belong to a community.

How do you plan to build a sense of community?

We’ll have workshops on topics such as organizing your research team, writing a grant application, and improving your profile on social media, as well as seminars on health and wellness and professional skills. We’re also going to have an annual gala and other social events, depending on where we are with COVID.

How do people register for the network?

People can sign up for our mailing list at our website. Part of the initial work is mapping the network – trying to understand who we are and where we are. The idea is to create a forum where people see each other, listen to each other and learn about each other so they can build the relationships they need to thrive in a research environment.

Will the Black Research Network forge links with other BIPOC groups?

Absolutely. There is a lot that we can learn from other groups doing adjacent work such as Black in AI. Also, the [Andrew W.] Mellon Foundation and the MacArthur Foundation in the U.S. have good track records for supporting Black researchers. We’ll look at their strategies to ascertain what has been and has not been successful in supporting Black scholars over a much longer trajectory.

What do you hope the network will achieve over the next few years?

Our strategic plan focuses on research, mentorship, community and fundraising. And we have metrics in each of these areas to gauge where we’re being successful and where we need to shore things up. In terms of community, for example, who is occupying our physical spaces? How well are they being used and what’s the spirit of those spaces like? Are they the kind of places you’ll go when have an hour between engagements? Do they become destinations for people? In research, we will look at things like the number of research publications by Black faculty and graduate students, and the number of research awards won by Black faculty.

Any last words to encourage people to check out Friday’s event?

One thing I think is lovely about the launch of the Black Research Network is that, although our mission is focused on U of T, we have international collaborators. On Friday, you’ll get to hear two of them – Ruha Benjamin and Timnit Gebru, who are among the most charismatic, brilliant and disruptive thinkers in their fields.