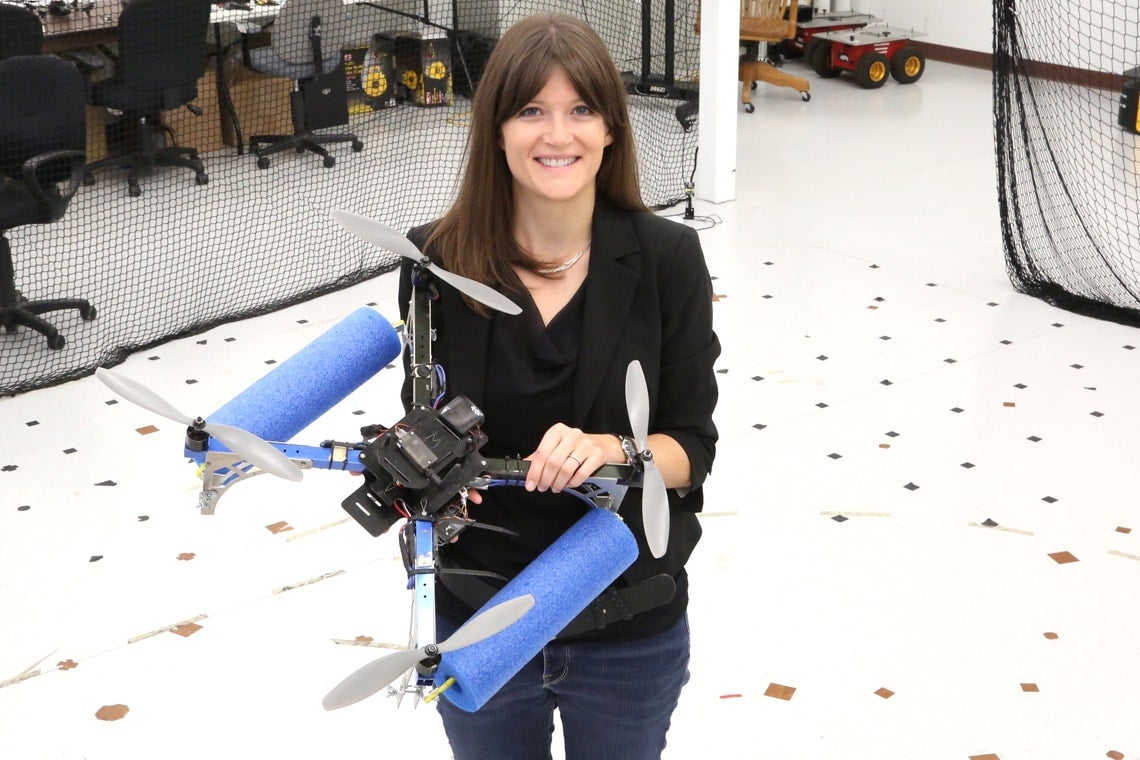 Assistant Professor Angela Schoellig of the University of Toronto Institute for Aerospace Studies (UTIAS) has been named one of the world’s top Innovators Under 35 by MIT Technology Review.

The Faculty of Applied Science & Engineering's Schoellig works on control theory and applying machine learning to drones, autonomous vehicles and other robots.

“It’s an honour,” says Schoellig of the publication's recognition. “To be named among this group of luminaries comes as a wonderful surprise. It’s also great for my students and postdoctoral researchers, because it’s really about their work as well.”

As a child, Schoellig was captivated by mathematics. During her master’s degree, she studied mathematical models that could describe everything from the chemical reactions in a living cell to the movements of birds. When she learned that mathematical algorithms could also be used to program robots, she was hooked.

“I really wanted to do something where you directly see the impact and the result,” she says.

As a PhD student at ETH Zurich, where she worked under the supervision of robotics pioneer and U of T engineering alumnus Raffaello D’Andrea, Schoellig and her colleagues worked on software that could enable flying robots to execute a triple flip in the air, as well as other acrobatics. But she quickly discovered that the algorithms alone weren’t enough.

“The model that we had would not provide enough information for the robot to do the task,” she says. “You need to use the data from previous runs to improve the task execution, which gets you closer to how humans learn things.”

In other words, she needed to apply machine learning to robots.

Machine learning, a form of artificial intelligence, has become a common part of our lives – it’s what enables smartphones to recognize voice commands and computer programs to recognize faces in photos. But teaching a robot is a very different challenge from teaching a computer.

“If a computer doesn’t recognize a face, that’s not a big deal,” says Schoellig. “But if a robot makes a mistake, it could crash. While you can train a computer on millions of photos, getting that amount of data for a robot is very expensive and difficult.”

One of Schoellig’s biggest challenges is designing algorithms that are flexible enough to enable robots to experiment but rigid enough to ensure that they will be safe while they are learning the new task.

Another major challenge Schoellig works on is handling dynamic environments, where conditions change over time. One of her current projects aims to enable autonomous drones to make deliveries to remote locations, such as communities in Canada’s north. These drones would need to adapt to changing wind speeds and light conditions that make navigation difficult.

Schoellig also has projects in the mining and environmental monitoring sectors, such as developing a drone that can land on water and take samples to track pollution levels. She is even looking at the possibility of using drones to deliver automated external defibrillators (AEDs) to treat patients suffering cardiac arrest.

For Schoellig, smarter robots have the potential to make our lives better and easier.

“We hear a lot about how robots will replace humans, but that’s not how I see it,” she says. “Humans have always built tools to help them to advance, from a simple hammer to a computer. We couldn’t predict in the 1970s how computers would change our society. I think we are at a similar point with robotics, and I’m excited to see what creative ideas will emerge.”