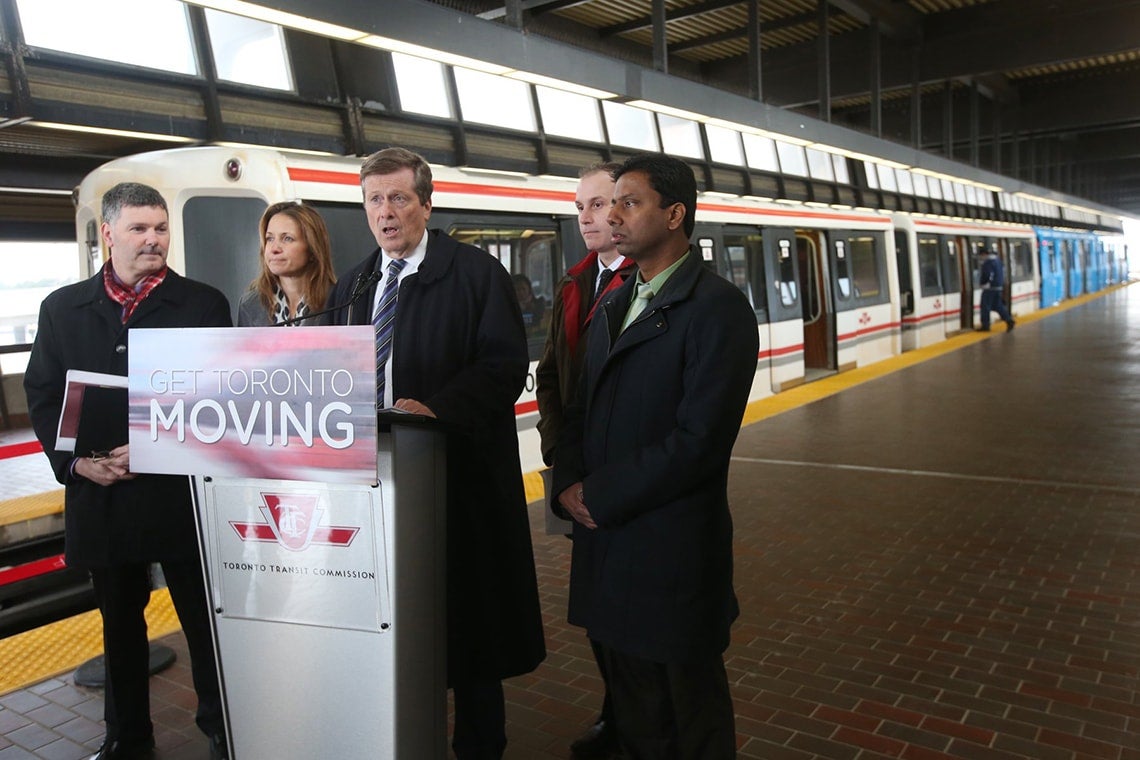 Toronto City Council is expected to debate and vote today on the proposed subway extension along the McCowan corridor to the Scarborough Town Centre.

Professor Andre Sorensen, chair of the department of human geography at U of T Scarborough, talks about what's at stake, and why the proposed LRT lines should be the top rapid transit priority for Scarborough.

Rendering of a proposed LRT courtesy of Bombardier

There is no question that Toronto needs to expand rapid transit capacity, coverage, speed and convenience as quickly as we possibly can. The population of the region continues to grow rapidly, yet a lack of investment in transit over several decades means that much of the inner and outer suburbs remain woefully auto-dependent. The result has been a growing crisis of congestion that costs more than $6 billion per year according to the Toronto Board of Trade, threatens the economic vitality of the region and limits new investment in inner suburbs like Scarborough. The lack of rapid transit imposes costs particularly on low-income residents of the inner suburbs, who would most benefit from improved transit for access to jobs and services.

Over the last decade, Scarborough has been the focus of major debates over transit investment. Under former mayor David Miller, a Light Rail (LRT) 'Transit City' plan was approved by council, designed and engineered, and fully funded by the province. The plan focused on a set of LRT lines throughout the inner suburbs. This plan was under construction when Rob Ford was elected mayor in 2010, and Ford's first act as mayor, before even being sworn in, was to call then-head of the TTC Gary Webster to a 7 a.m. meeting where he unceremoniously – and without legal authority, it was later revealed – cancelled the Transit City plan.

This act ranks as one of Toronto's greatest transit planning disasters, as by throwing out a fully approved, engineered and funded transit plan, Ford delayed transit expansion in Toronto by a decade, and opened the door on years of conflict over a new approach. Shortly before the 2014 election for mayor, city council agreed to a new plan that included an extension of the Bloor subway from Kennedy to Scarborough Town Centre, and during the election John Tory promised to invest in his SmartTrack plan to create a new transit line based on improvements to, and more stations along, the GO Transit rail corridors. Mayor Tory now promises to build SmartTrack, the subway extension and a revived LRT plan to extend the Eglinton Crosstown LRT east from its currently planned terminus at Kennedy all the way to the University of Toronto Scarborough at Ellesmere Road and Military Trail. Funding is still being negotiated for all these projects, and none have yet completed detailed engineering and planning phases.

In one of a very few detailed evidence-based contributions to this debate, Paul Hess and I researched and published a report in 2015 that compared the three main options for transit investment in Scarborough: SmartTrack, subway extension and Transit City LRT network, on the basis of the number of existing residents and jobs each new transit facility would serve, and the potential for property redevelopment to allow intensification of population and jobs within walking distance of new transit stops.

The result was clear – the Transit City LRT plan with lines along Eglinton to Kingston Road, Morningside Road and U of T Scarborough, a renovation of the SRT line and the Sheppard line from Fairview Mall to Morningside Road far outperformed both the subway and SmartTrack on every measure. The LRT network can be built more quickly, would serve trips both within Scarborough and to downtown, and would create more potential for investment in housing, employment and services in Scarborough. Crucially, the major opportunity for the creation of walkable, transit-oriented communities in Scarborough is through mid-rise intensification along the east-west arterial corridors, such as Eglinton and Sheppard Avenues, which can best be served by LRT lines. The superior performance of LRT is not only because it offers greater coverage and more stops, but because it represents a much better fit with existing urban form and patterns of population and jobs in Scarborough.

We concluded that it would be a terrible mistake if the investment in a subway extension and SmartTrack means that the LRT network is delayed further or cancelled. That conclusion still holds today: the proposed LRT lines should be the top rapid transit priority for Scarborough.