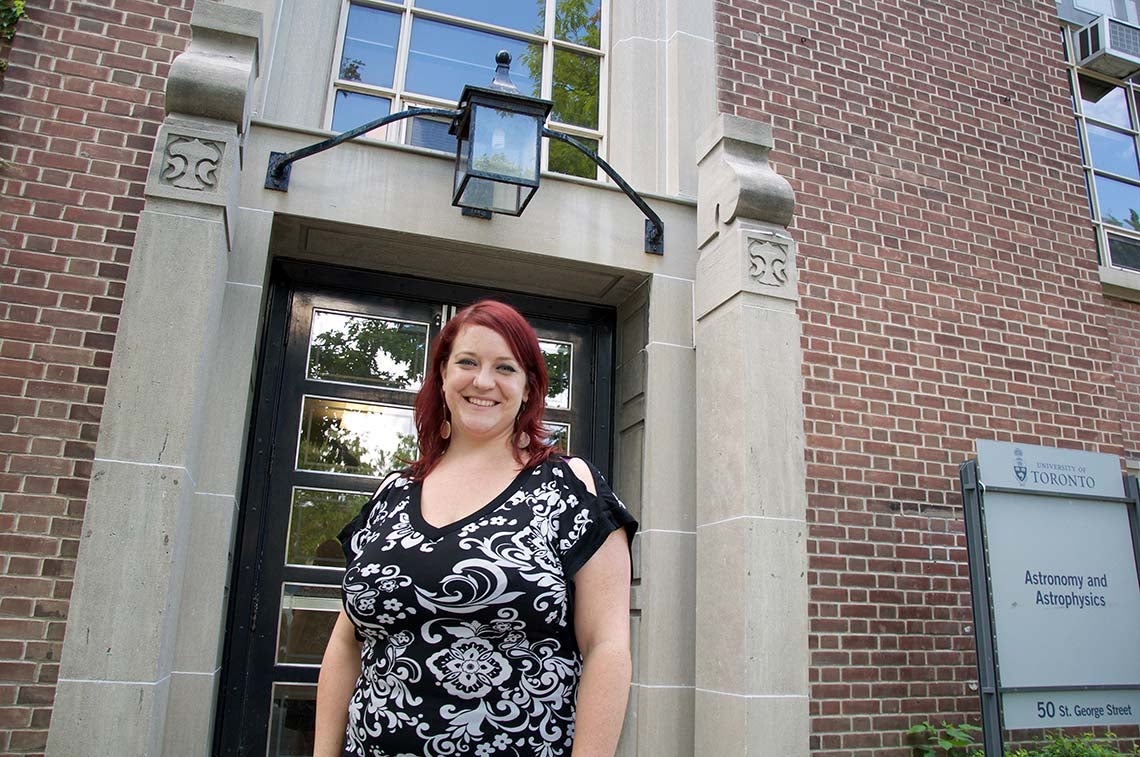 Renée Hložek, an assistant professor at the Dunlap Institute for Astronomy & Astrophysics, is receiving a $100,000 Discovery Grant from NSERC (photo by Diana Tyszko)

The University of Toronto’s Renée Hložek seeks to find answers where most of us only see questions: the night sky.

An assistant professor at the Dunlap Institute for Astronomy & Astrophysics, Hložek uses information gathered by telescopes to better understand the cosmos and test models of the universe.

In a few years, her work will include carefully analyzing the ocean of new data that’s expected to be generated by the Large Synaptic Survey Telescope, or LSST, which is currently being built on a mountaintop in Chile. The 8.4-metre telescope is touted as the world’s largest digital camera, with 3,200 megapixels, and is designed to take wide-field views of the night sky and everything in it.

“One of the big challenges is this telescope is going to scan the sky so often that we’re going to be drowning in data,” said Hložek, who arrived at U of T two years ago after completing a PhD at Oxford University and conducting postdoctoral research at Princeton University.

“We’re going to go from a time of being data-starved to a time that we’re talking about a data deluge.”

Hložek’s work will be supported by a $100,000 Discovery Grant, paid out in instalments over five years, by the Natural Sciences and Engineering Research Council of Canada (NSERC). She is one of 161 U of T researchers who received NSERC funding this week for investigations that range from improving the sustainability of transportation infrastructure to studying the diversity of dinosaurs.

In total, NSERC said it was providing $558 million in discovery research funding to Canadian researchers, including more than $5 million in additional supplements for those who, like Hložek, are in the early stages of their careers.  Of that, U of T researchers will receive nearly $30 million.

“These awards will also help early-career researchers lay the foundation for important work that will continue well into the future.”

The NSERC funding, which includes $70 million announced in this year's federal budget, can be used toward discovery programs, graduate and post-graduate scholarships, postdoctoral researchers and research tools and instruments.

Anne Wheeler, an assistant professor in the department of physiology in the Faculty of Medicine, is another early-career researcher at U of T who is benefiting from NSERC’s Discovery Grant funding. A scientist at the Hospital for Sick Children, Wheeler will receive a total of $170,000 to support work that looks at how changes in brain connectivity affect memory.

In particular, Wheeler’s lab is looking at the role of myelin, a fatty substance that insulates axons in the brain and therefore affects the timing of electrical impulses. But since myelin production is dynamic – babies, for example, are born with very little myelin – and can be affected by disease or injury, Wheeler suspects changes in myelin levels may impact our ability to recall certain memories.

“If there’s a lot of changes happening in the brain between the time you learn something and when you need to remember it, then the brain might not be able to reactivate that circuit and the memory would be forgotten,” she said.

“It’s really about understanding how the brain optimizes memory.”

Wheeler, who joined SickKids three years ago after doing her PhD in neuroscience at U of T and postdoctoral work at the Centre for Addiction and Mental Health, said that while most research tends to focus on how specific regions of the brain function, her research suggests the connections within and between those regions are equally important to understanding how the brain works.

She added the NSERC money will be used to support a student who will be assisting her research, which “wouldn’t be possible without the funding.”

The same goes for Hložek. She, too, said the funding will support students who help her develop code and other analytical tools needed to perform her research. That includes measuring Type 1a supernovae stars and how their brightness changes over time – information that can yield clues about the expansion of the universe. Other projects focus on fast radio bursts, which are intense bursts of radio waves scientists have yet to explain.

“Whether you’re looking at the expansion of the universe or dark energy, which I will measure with the LSST, or you’re looking at fast radio bursts – these are really problems and questions that are so new that we don’t have textbooks written on them yet,” said Hložek.

“I get to answer these really big questions with data.”

Hložek, who has worked in a number of countries, stressed that national research funding was key to enabling cutting-edge research in Canada.

“Without it, it’s impossible to attract, employ and retain good students and good scientists to make breakthroughs.”