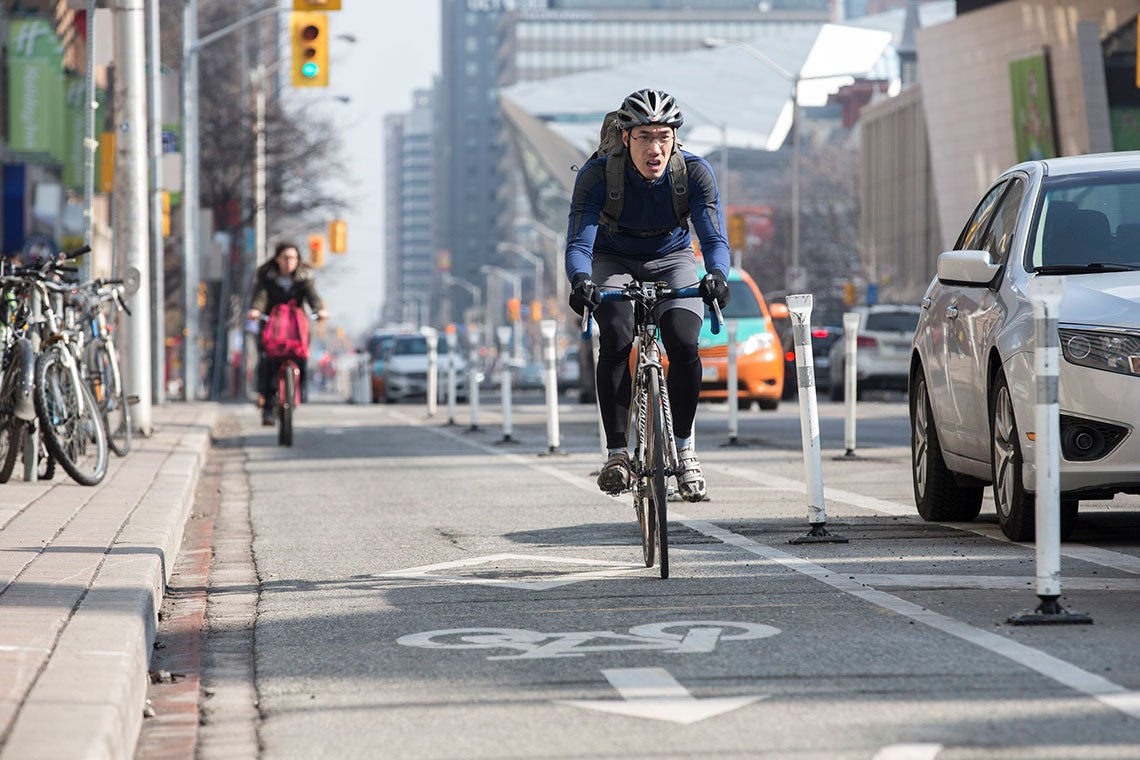 Toronto City Council will decide the fate of the Bloor Street bike lanes on Nov. 7.

The lanes – running from Shaw Street to Avenue Road – were installed as a pilot project to encourage more Torontonians to get on their bikes.

Experts from all over the city, including the University of Toronto, contributed to a massive and thorough evaluation of the bike lanes – looking at everything from safety to how the lanes affected local business.

The final report, released on Wednesday from the City of Toronto’s Transportation Services, will be used by city councillors to inform their vote. And based on the data collected and analyzed, the report recommends making the bike lanes permanent.

The evaluation involved U of T students – both undergraduate and graduate – as well as faculty and staff from across the university, including the Faculty of Applied Science & Engineering, Dalla Lana School of Public Health, department of human geography at U of T Scarborough, and the school of the environment in the Faculty of Arts & Science.

“I think it's really important for faculty and students to engage with our community and with the important decisions being made in the city,” says Beth Savan, a senior lecturer emeritus at the school of the environment. “We have a moral obligation to apply the skills that we have gained to help the city become a better place.”

U of T Engineering's Transportation Research Institute contributed to a report on Bloor Street bike lane safety. Its analysis of conflicts – when cyclists, motorists and pedestrians come close to crashing – found dramatic decreases in incidents, apart from those between cyclists and pedestrians.

Savan was the research lead for a portion of the evaluation that looked at the economic impact of the Bloor Street bike lanes, working alongside Steven Farber, assistant professor in the department of human geography, Lee Vernich, research manager at Dalla Lana, and U of T students. The study was in partnership with the Toronto Centre for Active Transportation, the City of Toronto and local business improvement areas.

“There were concerns the bike lane would be bad for business,” says Farber, the study's data analysis lead.

U of T students took to the streets, interviewing business owners, cyclists, motorists and pedestrians and conducting bike counts before and after the bike lanes were installed to find out if this was the case.

“This was a great opportunity to put our training into practice,” says Farber.

The study found that despite a decrease in on-street parking, businesses on Bloor Street “continue to flourish.” Store owners reported an increase in customers, with more shoppers coming to the neighbourhood by bike, the report says.

It’s U of T’s research approach that made the university an asset to the bike lanes study, says Vernich, one of the data collection leads on the economic impact report.

“It's the unbiased and rigorous methodology – that is what we are committed to at the university.”

U of T students were important contributors to the study, which has the potential to make a real impact on city life, says Savan.

“It was a great chance for them to be involved in something on the ground and to get some appreciation through that experience of what all the complex issues are that get raised,” she says. “They had a chance to develop and apply skills to help the city make sound, evidence-based decisions.”

The study also provided an opportunity for different faculties to work together.

“It's a multidisciplinary approach and it shows the impulses for collaboration all the researchers on the project share,” says Savan.