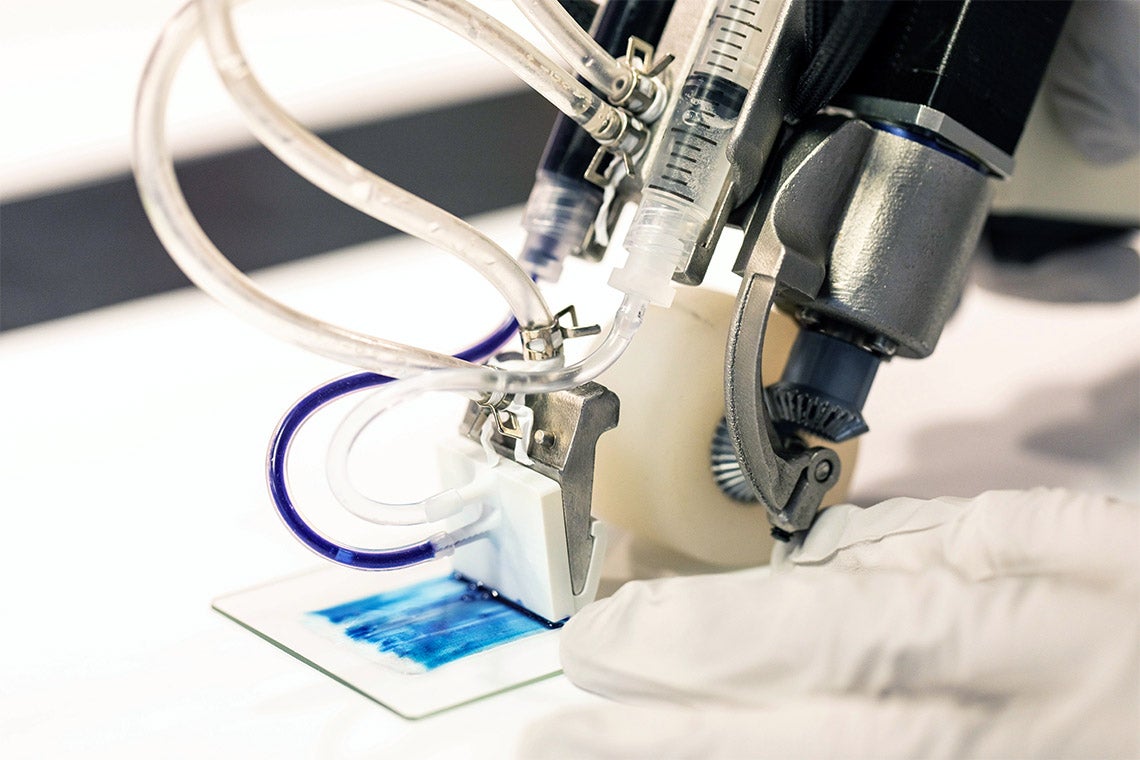 The handheld 3D skin printer developed by U of T Engineering researchers works like a paint roller, covering an area with a uniform sheet of skin, stripe by stripe. Blue dye is added here for visibility purposes (photo by Daria Perevezentsev)

A handheld 3D skin printer developed by researchers at the University of Toronto and Sunnybrook Health Sciences Centre can deposit sheets of skin to cover large burn wounds – and its “bio ink” can accelerate the healing process.

The device, created by a team from U of T’s Faculty of Applied Science and Engineering, covers wounds with a uniform sheet of biomaterial, stripe by stripe. The bio ink dispensed by the roller is composed of mesenchymal stroma cells (MSCs) – stem cells that differentiate into specialized cell types depending on their environment. In this case, the MSC material promotes skin regeneration and reduces scarring.

The project is led by Richard Cheng, a PhD candidate in the Institute of Biomaterials and Biomedical Engineering under the supervision of Axel Guenther, an associate professor in the department of mechanical and industrial engineering. They worked in close collaboration with Marc Jeschke, director of the Ross Tilley Burn Centre and a professor in U of T’s Faculty of Medicine, and his team at Sunnybrook. Their successful in-vivo trials on full-thickness wounds are reported in the journal Biofabrication.

The paper is a major step forward for the team, which unveiled the first prototype of the skin printer in 2018. The device was believed to be the first of its kind to form tissue in situ, depositing and setting in place in two minutes or less.

“Previously, we proved that we could deposit cells onto a burn, but there wasn’t any proof that there were any wound-healing benefits – now we’ve demonstrated that,” Guenther says. 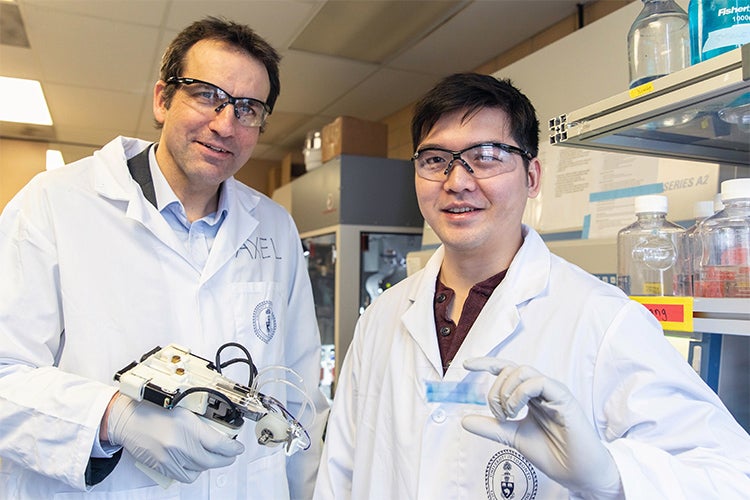 The current method of care for burns is autologous skin grafting, which requires transplantation of healthy skin from other parts of the body onto the wound. But large, full-body burns pose a challenge. Full-thickness burns are characterized by the destruction of both the outermost and innermost layers of the skin; these burns often cover a significant portion of the body.

“With big burns, you don’t have sufficient healthy skin available, which could lead to patient deaths,” says Jeschke.

Since 2018, the printer has gone through 10 redesigns as the team moves towards a design they envision surgeons using in an actual operating room. The current prototype includes a single-use microfluidic printhead to ensure sterilization and a soft wheel that follows the track of the printhead, allowing for better control for wider wounds.

Next, Cheng says the team wants to “further reduce the amount of scarring, on top of helping with wound healing. Our main focus moving forward will be on the in-vivo side.”

Jeschke believes the handheld skin printer could be seen in a clinical setting within the next five years.

“Once it’s used in an operating room, I think this printer will be a game changer in saving lives. With a device like this, it could change the entirety of how we practice burn and trauma care.”