U of T researchers find firearm mortality in the Americas highest among young men, links to education and race 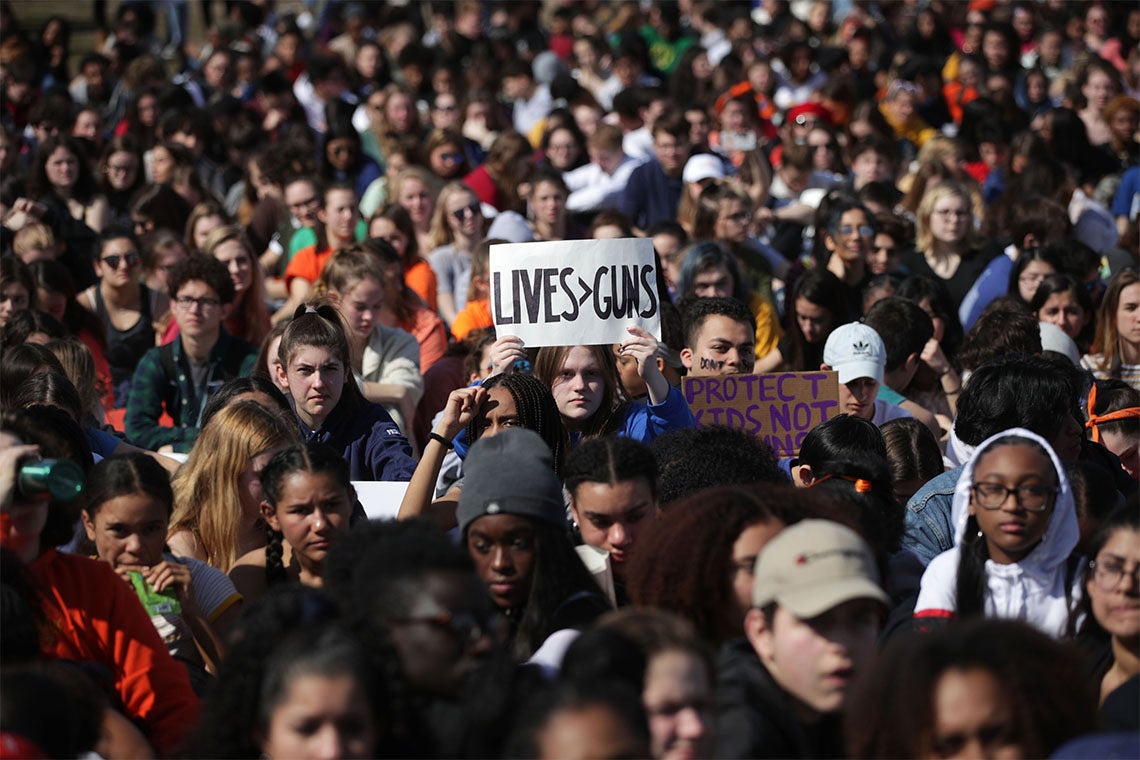 Students gather at a gun control rally in Washington, D.C. on March 14, 2019 (photo by Alex Wong via Getty Images)

University of Toronto researchers have analyzed more than 106 million deaths and found that firearms are a leading cause of mortality in men aged 15 to 34 years in Mexico, Brazil, Colombia and the United States.

While the number of firearm deaths has previously been reported at the national level for countries in the Americas, the variations in firearm mortality at the state level, by race or ethnicity, and by education level have not been examined before. In addition, the impact of these deaths on life expectancy among subpopulations hadn’t been assessed.

The authors say that the variation in risk of firearm deaths in different populations and the changing patterns they have observed provide strong evidence that as many as 1.8 million dealths could have been avoided between 1990 and 2016 across all ages and genders, including one million in men aged 15 to 34.

The study, published this week in the journal The Lancet Public Health, also highlights the important role of education level and race in firearm deaths.

“Firearms are not only a leading and persistent cause of mortality in the USA, Mexico, Colombia, and Brazil – and as such must be considered a major public health concern – but the extreme variations in firearm mortality among sub-populations represent a societal challenge,” says study co-author Prabhat Jha, a professor at U of T’s Dalla Lana School of Public Health and the director of the Centre for Global Health Research at St. Michael’s Hospital.

“Changes in firearm mortality explain most of the variation in overall mortality among young men in these four countries over the past 25 years – and in the U.S. firearm homicides account for three quarters of the marked differences in overall mortality observed between young white and Black men, regardless of educational level.”

Firearms have remained a persistent cause of premature death in the Americas for the past 25 years. While firearm mortality in the U.S. is markedly higher than in any other high-income country, the rates in several Central and South American countries are even higher.

In the study, the authors collected national data on individual deaths between 1990 and 2015 in the U.S., Mexico, Brazil and Colombia, which all have high-quality data on cause of death and high firearm mortality. Using information from death certificates, they compared overall and firearm mortality at the country and state levels. In addition, the authors analyzed these deaths by intent (homicide, suicide, unintentional or undetermined), and they also stratified cause of death data by age, gender and education level.

For homicide, the authors analyzed data by education in all four countries and by race in the U.S. and Brazil.

During the study period, the risk to young men of dying from firearms increased in Mexico and Brazil, but decreased in the U.S. and Colombia, according to the researchers.

Firearm mortality accounted for up to half of the overall risk of premature death for young men, ranging from 12.5 per cent of overall mortality risk in Mexico to 58 per cent in Colombia in 2000 to 2004. The authors found that where firearm mortality has fallen, the reductions account for much of the improved life expectancy in young men.

Place of residence, education and race were important risk factors in death from firearms. The researchers found more than a 10-fold variation in the risk of firearm mortality, ranging from 1.1 per cent in Louisiana to 0.1 per cent in Hawaii. In Mexico, the regional variation ranged from 4.7 per cent in Chihuahua to 0.05 per cent in Yucatán. Typically, deaths were concentrated in a few high-burden states, but these varied over time, particularly in Brazil and Colombia – highlighting the volatility of firearm violence and mortality, and suggesting that these deaths could be avoided.

The authors found that men with high school or lower levels of education were at greater risk of firearm homicide than those who received post-secondary education in all four countries.

When also considering race within these populations in Brazil and the U.S., the authors found that Black men in the U.S. and Black men in Brazil were among the groups at the highest risk of homicide, compared to Hispanic and white men.

In the U.S. in particular, Black men with lower educational attainment were 14 times more likely to die due to firearm homicide than comparably educated white men, and, in these groups, firearm homicides accounted for three quarters of the difference in overall mortality risk between Black and white men.

When focussing on suicide in the U.S., the pattern changed and the risk of firearm suicide was higher among young white men than Black or Hispanic men. The authors note that most people who survive a suicide attempt do not try again – thus, restricting access to firearms could avert tens of thousands of suicide deaths.

“Failure to address firearms as a major cause of mortality for Black men in the U.S. will hamper efforts to reduce disparities in mortality and improve life expectancy for Black men,” says co-author Anna Dare, a resident in U of T’s department of surgery and researcher at St. Michael’s Hospital.

“Interventions that reduce exposures to firearms are crucial, and well-supported by research and international comparisons. There is also a clear need to address the broader cultural, social and economic factors that contribute to such marked differences in mortality.”

The research was funded by the Canadian Institutes of Health Research and U of T’s Connaught Global Challenge.