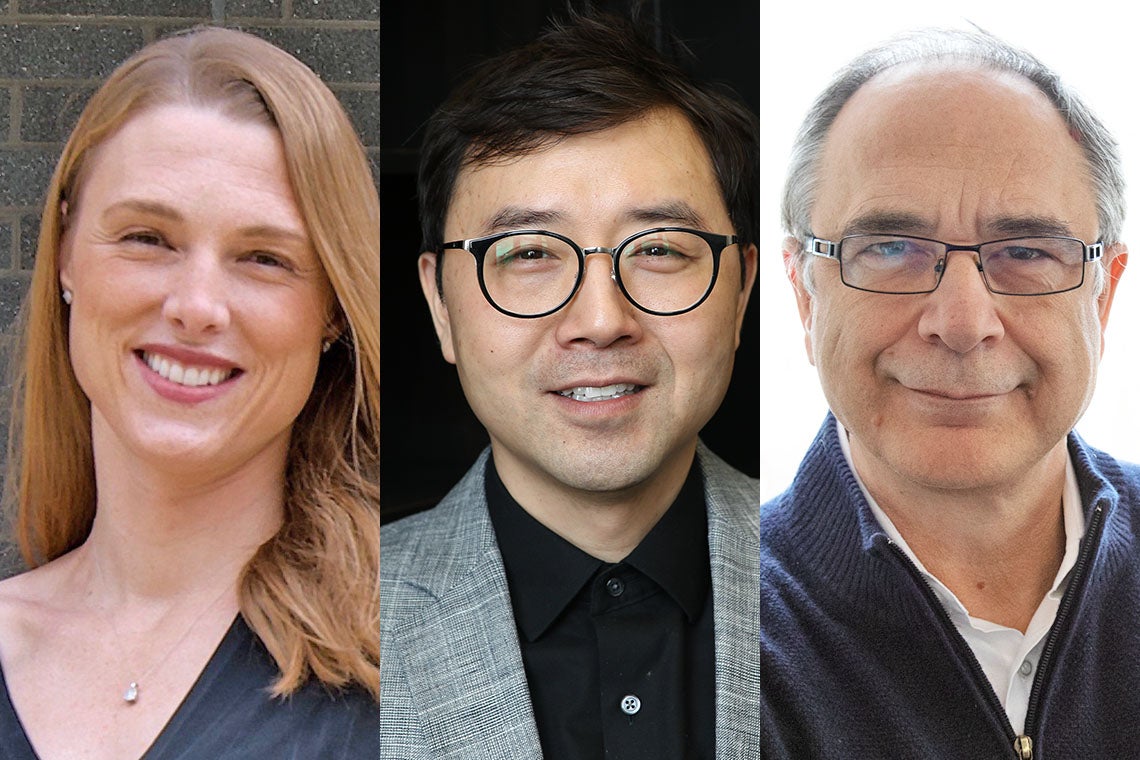 Morgan Barense, Paul Yoo and Vladimiros Papangelakis are three of the 12 winners of this year's Connaught Innovation Award

An app to help people who have issues with their memory. Implantable electrodes to help relieve pain. A waste-reducing tool for the oilsands.

These three projects are among 12 at the University of Toronto that will share almost $600,000 in funding through the Connaught Innovation Award program, which recognizes and supports promising technologies that have strong socio-economic or commercial potential.

“The Connaught’s rich tradition of supporting unique, innovative projects continues to this day,” Goel added. “Each of the winners are well on their way to making unique contributions to a wide range of local and global research issues.”

The internal award is made possible by the Connaught Fund, the largest internal university research funding program in Canada. Since its creation in 1972 from the sale of the Connaught Laboratories, which produced vaccines, antitoxins and insulin after its discovery by Frederick Banting and Charles Best, the Connaught Fund has awarded more than $160 million to U of T researchers.

Of that, more than $6 million has been given in eight competitions for the Connaught Innovation Award program.

Meet three of this year's winners and see the full list of 12 below. Morgan Barense and her team have received a Connaught Innovation Award for the Hippocamera, a digital app for people who have issues with their memory.

The Hippocamera enhances memory, as the smartphone app captures an event on video and replays it to the user on an optimized schedule, so the memory remains vivid and retrievable.

Barense, an associate professor in the department of psychology in the Faculty of Arts & Science, said the Hippocamera functions like the brain’s hippocampus, broadcasting video memories to various regions in the brain where they are preserved for later recall. The app has been made with sufferers of Alzheimer’s disease in mind, as it can aid the brain’s memory storage.

“What I like most about the Hippocamera is that we took discoveries given to us by basic science and directly translated them into a practical and cost-effective solution to a problem affecting millions of people,” said Barense, who is a Canada Research Chair in Cognitive Neuroscience.

The initial development of the Hippocamera was funded by grants from the Canadian Institutes of Health Research and the Centre for Aging and Brain Health Innovation.

The next step, with the aid of the Connaught Innovation Award, is to roll out the app to nursing homes for testing. “We think that the device will help [nursing home residents] remember basic aspects of events that would otherwise have been forgotten,” she said.

Read more about the Hippocamera in the Globe and Mail

Barense said she hopes the device will lead to improvements in a user’s overall quality of life.

“We know that memory loss causes social isolation, reduced confidence and a loss of identity,” she said. “Our hope is that by bringing the events of one's life closer, our device might alleviate some of this burden.” As the son of a doctor and an engineer, Paul Yoo was always drawn to figuring out how the body works and finding better ways to treat chronic conditions.

Yoo, an associate professor in the Institute of Biomaterials and Biomedical Engineering, and his research team have studied the nervous system and built microscopic, implantable electrodes that stimulate nerves and could help relieve pain, treat pelvic dysfunction and encourage healing.

But there was a problem. “There are cases where if you want to take it out, the encapsulation tissue might make it difficult to cleanly take it all out” – such as when a patient needs to remove it before entering an MRI machine, or if the device fails, he explained.

So, in a collaboration with Polumiros, a startup spun out of the lab of Professor Paul Santerre, Yoo is testing a novel polymer coating added to the implants that could prevent extraneous tissue growth.

“We’ve combined their technology with my expertise,” Yoo said.

With the help of Novela Neurotechnologies, a startup that is developing a brain implant as a way to treat depression and epilepsy, Yoo and his team also have a project that could change how implants are manufactured and how patients are treated.

“In my lab, we’ll be testing the long-term performance of this new device,” said Yoo, who has worked with the Santerre lab for about two years.

“With the Connaught Innovation Award, it’s the opportunity to get this off the ground,” he said. How do you make industrial effluent – the discharged liquid waste sitting in tailings ponds and other bodies of water – clean enough that it can be reused?

Vladimiros Papangelakis, a professor in the Faculty of Applied Science & Engineering, answered that question by treating water as a chemical.

“You have to do something to preserve, recover and reuse,” said Papangelakis, who is also the director of the Institute for Water Innovation. “To the same extent, you do similar things for all other expensive chemicals in any chemical process.

"The design is always in a way that you don’t waste your expensive chemicals.”

His forward osmosis-freeze concentration (FO-FC) hybrid process integrates the use of a spontaneous osmotic membrane step with natural freezing and simple chemicals, such as common salt, to separate and recover water from contaminated industrial effluents.

The water will likely not be drinkable after the process, he said, but it will be quite acceptable to be reused for industrial projects, which means the chemical plan won't need to draw as much freshwater for its operations.

Forward osmosis is a process that has been refined and tested for about 10 years, using salt solutions like ammonium carbonate that decompose to gases and separate from the solution with modest heating.

Papangelakis and his research team were working with a new FO chemical invented by the Queen’s University department of chemistry. At the same time, his team was building a freezer unit simulating the effect of freezing on a Canadian lake in the north in order to produce ice to clean dirty water – when a eureka moment struck.

“The eureka moment was when we tried to combine these two things,” he explained. Instead of using a smelly, organic salt, “we found out that we could use any salt, if we combined the two processes and still be able to pull water through the membrane with minimum overall energy cost."

In the end, the ice becomes the cleaner water that is recycled for industrial use.

“My shift (in thinking) is to the medium itself, treating water as a chemical rather than as something that is abundant and there in infinite amounts.”

Papangelakis said he believes FO-FC could have local applications in Canada taking advantage of the cold in winter, with the mining, food and oilsands industries. With the Connaught Innovation Award, his research team can begin to build an integrated prototype to demonstrate to industrial partners.

“When you compete with the entire university powerhouse – of  brains and ideas – the fact that your idea is being recognized as the winning ones is a satisfying thing.”

The 12 Connaught Innovation Award winners are:

With a file from Peter Boisseau