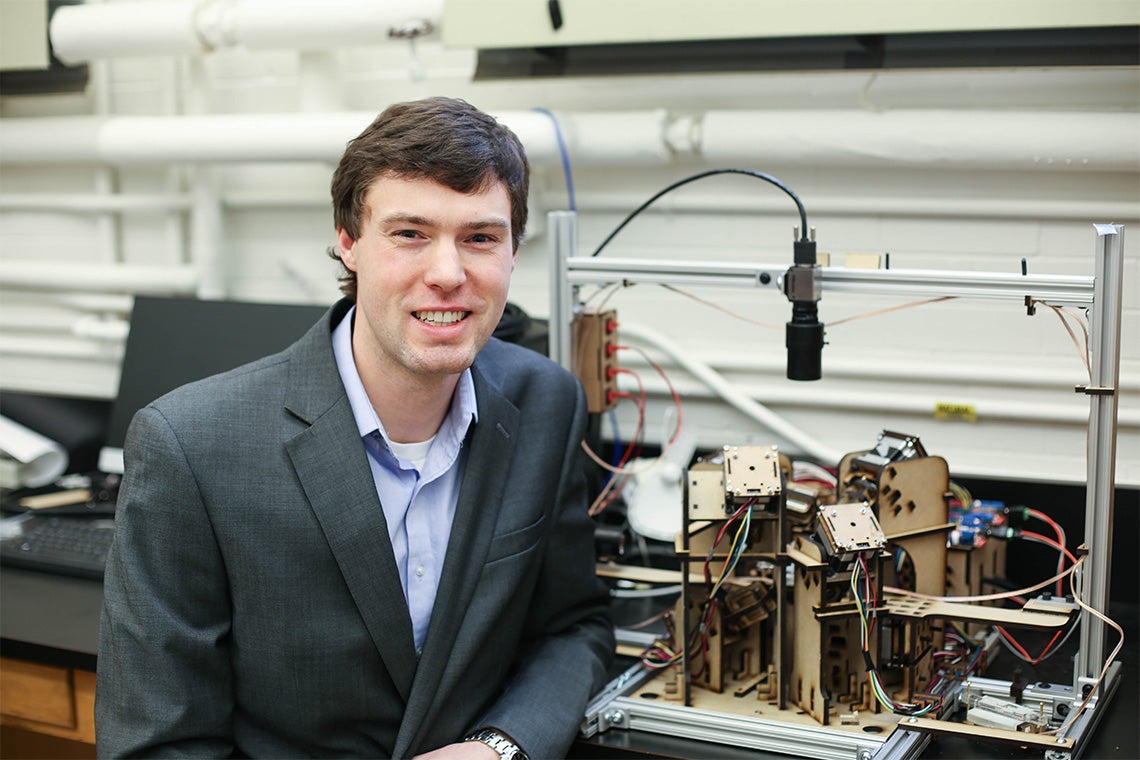 Eric Diller of U of T's Faculty of Applied Science & Engineering is collaborating with medical researchers to develop dexterous, magnetically controlled microrobots that could perform minimally invasive brain surgery on children (photo by Tyler Irving)

Researchers at the University of Toronto are developing microrobots, precisely controlled by magnetic fields, that could one day be used to perform minimally invasive brain surgery on children.

The research team – co-led by Eric Diller, an associate professor of mechanical engineering in the Faculty of Applied Science & Engineering, and James Drake, a professor in the department of surgery in the Temerty Faculty of Medicine and a pediatric neurosurgeon at the Hospital for Sick Children (SickKids) – says the technology represents a departure from the rigid, wired designs of most micro-surgical tools.

“Advancing surgery through an endoscope in the pediatric brain requires miniaturized versatile tools which can be precisely controlled,” says Drake. “This novel concept of using tiny, magnetized tools, controlled by robotic external magnets, shows great promise in addressing this need for both pediatric and adult patients.”

Each year 24,000 malignant brain tumours are detected in the United States. These tumours are the most common form of solid cancer in children, and surgery to remove the tumour is often the first recommended course of treatment. The surgeries can be highly invasive with a long recovery process. In some cases, when surgery via endoscope is possible, the tools may not be small or dexterous enough to perform the treatment.

Building on work by Drake and his team at the Wilfred and Joyce Posluns Centre for Image Guided Innovation and Therapeutic Intervention (PCIGITI), Diller and Drake brainstormed ideas for a research collaboration. Diller pitched the idea of magnetically driven neurosurgical tools. The project took off after funding was secured from the Canadian Institutes of Health Research (CIHR) and the Natural Sciences and Engineering Research Council of Canada (NSERC).

Diller and his team have been developing a prototype with tiny grippers mounted on the end of a flexible wire “wrist” and controlled by external magnetic fields. The tool features magnets on both the gripping forceps and the flexible wrist. As magnetic fields are applied, the tool will either open and close the grippers or move the wrist.

“For these surgical tools, we’re working at a very challenging scale of around one- to five-millimetre parts, with some materials that don’t work well with micro-machining processes,” says Cameron Forbrigger, a PhD candidate in the Faculty of Applied Science & Engineering. “As a result, we had to do a lot of the assembly of off-the-shelf magnets, plates and wires by hand with a laser welding system.

“If you’re not careful, the titanium wires could disintegrate under the laser beam.”

In tests performed on a rubber model of the brain with a simulated tumour, the gripper was able to successfully enter the ventricles of the brain and remove the tumour, controlled completely by external magnetic fields.

The researchers are now working on a second prototype of the gripping tool that features a simplified design to allow for more control over the forceps. The prototype magnetic tools are being developed to be about half the size of traditional surgical robot tools, which are about five millimetres across, while maintaining the same dexterity.

“Developing new technology for pediatric minimally invasive surgery – in this case neurosurgery – takes a collaborative team of engineers and surgeons. Our team from the department of mechanical and industrial engineering at U of T and PCIGITI at SickKids has been very successful in this regard,” says Drake.

“Our next step will be to join our colleagues at SickKids for a simulation in vivo, which will provide the opportunity to see how these microrobots will function in the operating room, and to try different ways of setting up the magnetic coils,” Diller says.