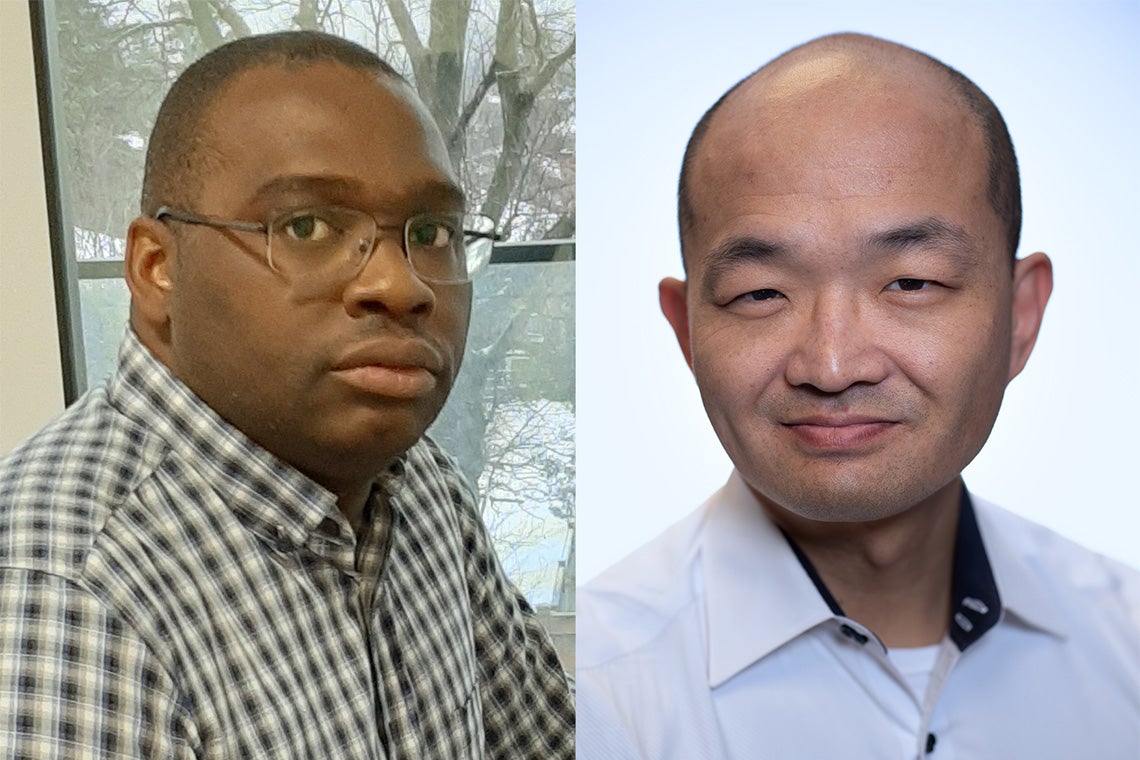 Researchers at the University of Toronto have created chemical compounds that can neutralize SARS-CoV-2 and several of its variants.

In a recent paper published in the Journal of Medicinal Chemistry, the researchers report the creation of D-peptides that neutralize the virus and stop infection of cultured human cells.

Known as mirror-image peptides, the compounds have chemical properties that make them suitable for the development of low-cost antiviral therapeutics.

“A big advantage of mirror-image peptides is their long stability and that they are relatively cheap to produce,” says Philip Kim, senior author of the study and a professor of molecular genetics and computer science at the Donnelly Centre for Cellular and Biomolecular Research at U of T’s Temerty Faculty of Medicine.

“You could imagine them being formulated as a nasal spray to take prophylactically to prevent infection from occurring.”

Peptides are similar to proteins in that they are composed of the same amino-acids building blocks. But they are smaller than protein molecules. They can be designed to bind virtually any molecular target and with a greater specificity than small-molecule drugs, reducing the risk of side effects. In this way, peptides are similar to antibodies but are at least 100 times cheaper to produce thanks to their small size. The combination of low cost and easy scaling of manufacturing makes peptides attractive, particularly for low-income countries.

But there’s a caveat. In the body, peptides are rapidly degraded by the enzymes that have evolved to stamp out harmful versions produced by bacteria and other pathogens. But science has found a solution in mirror-image peptides that are resistant to degradation.

For reasons that remain unclear, all naturally occurring amino acids exist in a left-handed configuration, as defined by the direction in which they rotate. Consequently, all proteins and peptides are also left-handed – and known as L-peptides. 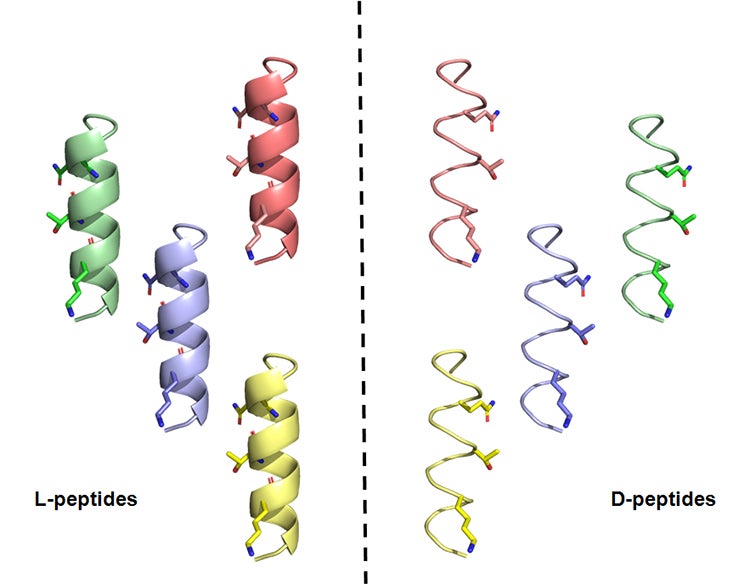 An illustration of L-peptides made from naturally occurring amino acids on the left, and their synthetic mirror-image counterparts on the right (illustration courtesy of Pedro Valiente)

A few years ago, Kim’s team developed a computational tool for the design of so-called D-peptides that have inverse geometry. These mirror-image molecules are manufactured from synthetic D-amino acids strung together in the same way as their left-handed counterparts. Using Kim’s design method, they can be engineered to bind the same targets with undiminished specificity. The main difference is that their unusual geometry makes them resistant to enzymes in the bloodstream that break down normal L-peptides.

The prospect of working with D-peptides is what enticed post-doctoral researcher Pedro Valiente to join Kim’s lab one year prior to the pandemic. When COVID-19 struck, he quickly realized they could apply their tool to try to make antivirals for COVID-19. By May 2020, Valiente had already created the compounds that would prove to be potent inhibitors of the virus, although it took another year to verify that they work as expected in human cells.

Valiente designed several D-peptides that mimic the region of the virus spike that binds the ACE2 receptor on the surface of cells. He reasoned that the peptides will bind to the receptor before the virus makes contact with it – thereby preventing infection. The hypothesis was later confirmed by the experiments with cultured human cells that were carried out by collaborators at two high-security labs in South Korea.

What’s more, the peptides worked just as well against several variants: Alpha, Beta and Gamma, which wreaked havoc over the past year after first appearing in the UK, South Africa and Brazil, respectively. Although the researchers did not investigate the Delta variant, other evidence suggests that it, too, would be susceptible to the peptide drugs, Kim says.

“While we focused on the variants that were circulating at the time when we were doing this work, the peptides should work on Delta as well based on the similarity with its receptor binding domain,” he says.

Valiente says the experience of working in Kim’s lab was especially gratifying as he was able to create a potential therapeutic at record speed during the first lockdown when most of the world was at a standstill.

By the time the researchers published their findings however, several treatments had become available, including antiviral medications, antibody cocktails and vaccines. Prompted by these global advances, the team has shifted focus from COVID-19 to trying to create compounds that target all coronaviruses, including SARS and MERS, in a bid to design a universal therapeutics as a safeguard against future pandemics.

To this end, Kim has partnered up with a Boston biotech company Decoy Therapeutics to commercialize his research.