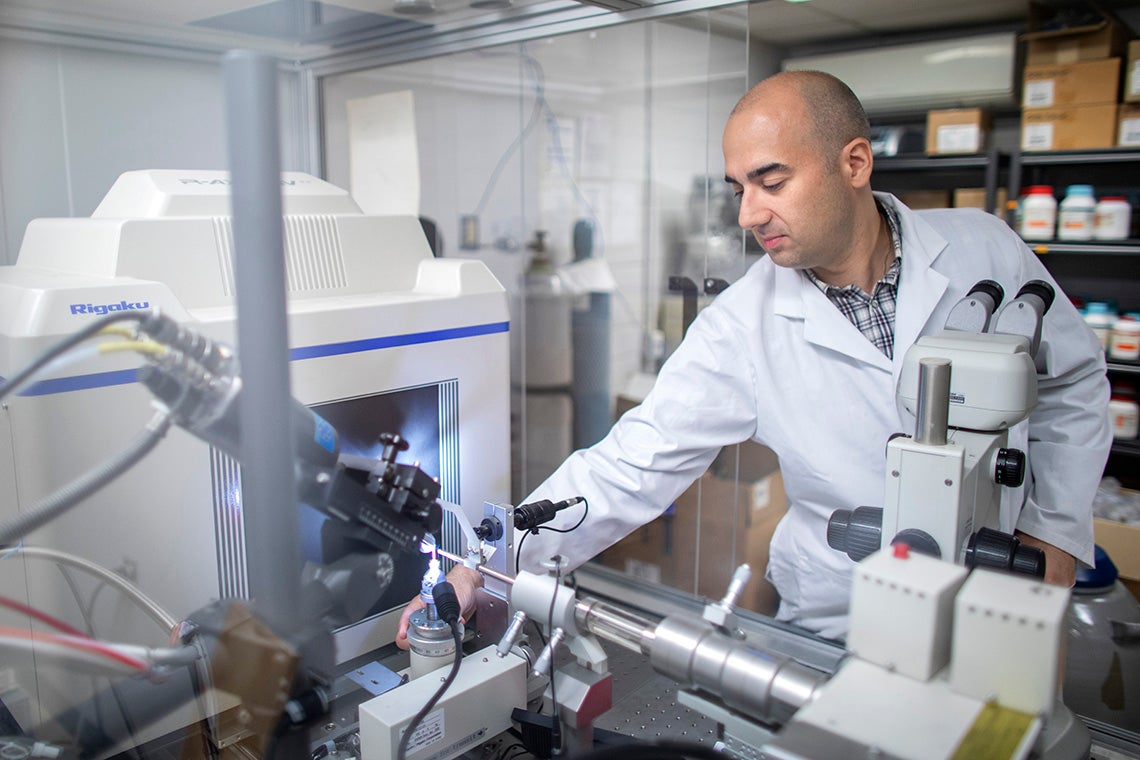 Peter Stogios manipulates a protein crystal mounted on an X-ray diffractometer. He and his team are researching a less expensive way of making cell-based meat (photo by Nick Iwanyshyn)

On grocery store shelves among packages of farmed beef, poultry and pork, Peter Stogios expects to one day see meat created in labs.

The senior researcher in the Faculty of Applied Science & Engineering and his team received a $330,000 (US$250,000) grant over two years to help find a less expensive way of growing cell-based meat, bringing it one step closer to commercial reality – and people’s plates.

Stogios and his team in chemical engineering and applied chemistry were the only Canadian group among the teams who received funding from the Good Food Institute to research cell-based meat. The Washington, D.C.-based non-profit supports alternatives to meat, fish and dairy.

The price of cell-based meat has come down significantly since a group of Dutch researchers unveiled the first in vitro burger in 2013. The five-ounce patty cost $430,000 (US$325,000) and took two years to make.  But last year, the Israeli company Aleph Farms claims to have brought the cost down to $100 per pound, while industry insiders told the Washington Post they are close to $50 per pound.

“Just like any new technology, like a cellphone or computer, at first it’s always more expensive,” Stogios says.

Scientists and businesses working to bring lab-grown meat to supermarkets and restaurants tout its environmental impact and benefits for animal welfare. One widely cited lifecycle study published in 2011 estimates that lab-grown meat involves up to 45 per cent less energy use, 78 to 96 per cent fewer greenhouse gas emissions and 99 per cent lower land use. 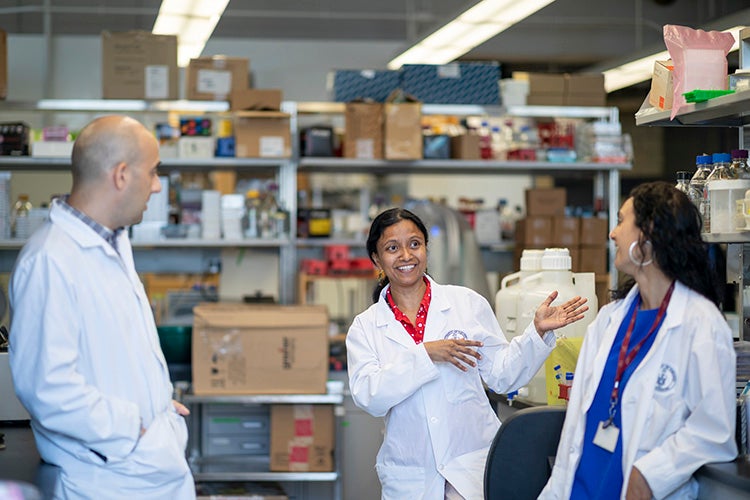 If the U of T team is successful, they will have lessened what Stogios describes as one of the biggest barriers to producing cell-based meat on a large scale.

“When you’re growing meat or any type of cell … the most expensive component is the media or liquid that the cells grow in,” he says. That broth contains vitamins, minerals, amino acids and proteins.

In industrial production, the media represents between 55 and 95 per cent of the marginal cost, according to a study by the Good Food Institute.

“The main goal of our project is to lower that cost, and one way to do that is to come up with these new growth factors, the proteins, that are cheaper to make than current versions,” Stogios says.

Stogios and his four-person team can produce these growth factors efficiently, he says, because they are looking for new ones among other species: birds, fish and mammals other than humans. “We hope to find growth factors from other species that are more potent and if they are more potent, less of them will be required to grow cells, and that will reduce the cost,” he explains.

In the latter stages of their project, they aim to modify the DNA sequence of the growth factors to further increase their potency. “To the best of knowledge, this has not been done by industry,” he says.

He and his colleagues at the BioZone Protein Structure and Function Lab, led by Associate Professor Alexei Savchenko, spend much of their time researching superbugs and antibiotic resistance. But aware of the trend toward alternative meat, cell- or plant-based, Stogios looked for ways he and his team could contribute.

One of the upsides of the team’s research is that it may also have applications for growing poultry or fish, he says.

The U of T scientists say they are open to collaboration down the line when faced with challenges outside their expertise – in tissue engineering, for example.

Whether consumers will accept eating meat grown in a lab insead of a farm is an open question, one that has crossed the researchers' minds.

“When we first got this grant, I was talking to people about it and my partner said, ‘I don’t think I want to eat that,’” Stogios says, laughing. “I’m like, 'It’s the same thing; it’s just the same cells.' You get a burger, and it’s cells.”