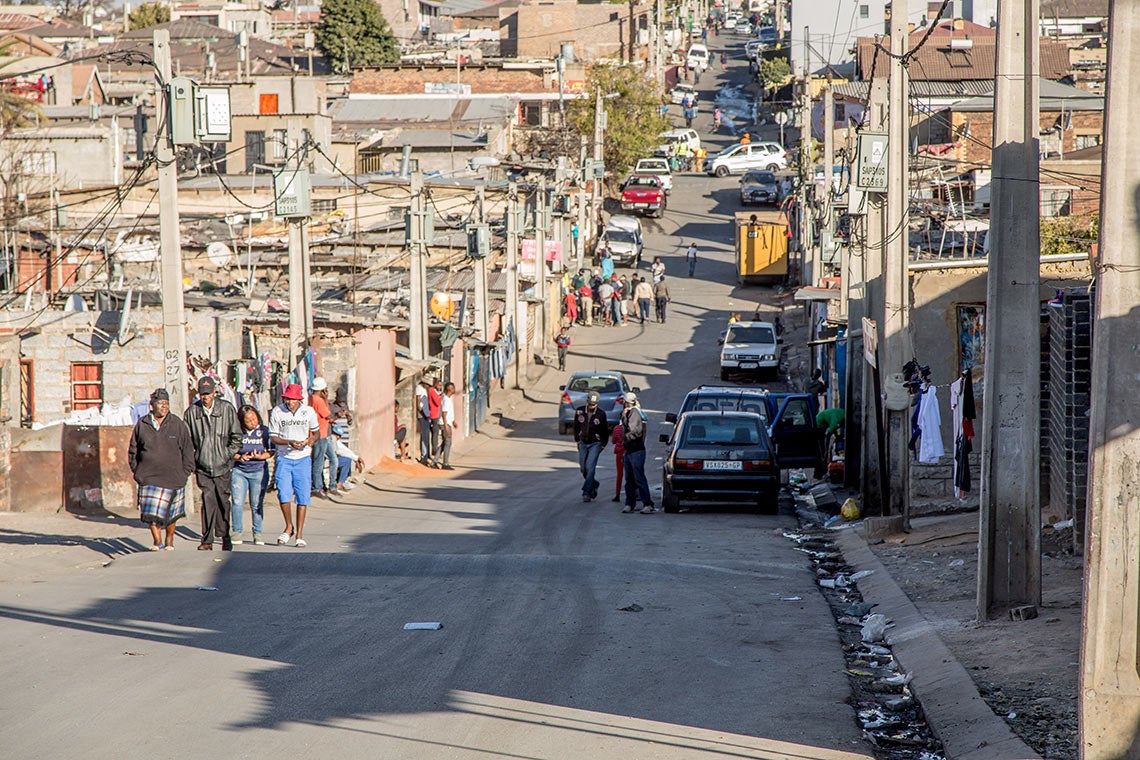 Inadequate policing, vigilantism, social inequality, the legacy of apartheid – they have all affected the landscape of law and justice in South Africa’s informal shack settlements.

Now, in a new study, University of Toronto Mississauga's Gail Super is attempting to untangle these complex factors and learn how they relate to state formation.

“In these marginalized communities, there’s often an overlap between lawful forms of crime prevention, like neighbourhood watch groups, and unlawful forms of collective punishment. I’m interested in that blurry in-between space, and what it says about the levels of punitiveness in a democracy,” says Super, an assistant professor of sociology whose study, called “Precarious penality on the periphery: Crime prevention and punishment in South Africa's informal settlements,” won a $10,000 Connaught Fund New Researcher Award last year.

South Africa is one of the world’s most unequal societies, says Super, a South African citizen who practised human rights law in Namibia. The effects of colonialism and more than 40 years of apartheid government, in which a political and social system of white minority rule and racial segregation was brutally enforced, have had lasting effects, felt well beyond the 1994 transition to formal democracy. Super (left) explains that South Africa has a history of state toleration of informal policing and punishment, in what used to be known as “Black townships.” The apartheid government was not interested in protecting Black people against crime, but focused on protecting white citizens from crimes allegedly committed by Black people, she says. Since the end of apartheid, the police, after so many years of enforcing unjust laws, have struggled to regain the trust of township residents and those living in informal settlements. They are also perceived to be inefficient by the affluent, who, unlike residents in informal settlements, have the resources to pay for private security.

Thus, non-state policing continues to be the norm in South Africa, according to Super. She adds that residents in South Africa’s informal settlements experience extreme hardship marked by high rates of violent crime, scarcity of sanitation, water, safety, money, garbage collection and jobs.

Super’s research shows that in this type of situation, making communities responsible for crime prevention can be dangerous.

“On a day-to-day basis, this might mean bashing down the shack of a drug addict so that they leave the community, or beating up someone who stole your stuff,” says Super, who is the author of the 2013 book, Governing through Crime in South Africa: The Politics of Race and Class in Neoliberalizing Regimes. “The mainstream argument for carrying out these reprisals is that the police do such a bad job that citizens have to “take the law into their own hands.”

Yet, as Super argues, there are many complex issues at play.

For her study, she is examining the arrest and trial of a popular community activist in a former Black township in Cape Town. Together with five others, the activist was accused of kidnapping, assaulting and ultimately killing two men believed by residents to have been involved in two incidents of rape and murder. In most cases, township residents don’t want those accused of serious violent crimes to be granted bail. But, in this case, they protested for his release.

“There’s this contradiction at play: on the one hand, residents want criminals to be punished, but in cases like this, where the accused has punished a perceived criminal and is regarded as protecting the community, they support release on bail,” Super says.

Super spent six weeks this past summer interviewing 40 local community members about their perspectives on the case. She hopes her findings help government officials in South Africa improve their approach to addressing crime and punishment in informal settlements.

“This case demonstrates how constitutional principles such as the right to bail are distorted in practice and applied unevenly,” Super says.

“A better understanding of the relationship between punishment, local punitive practices and democratization can help policymakers be more effective.”