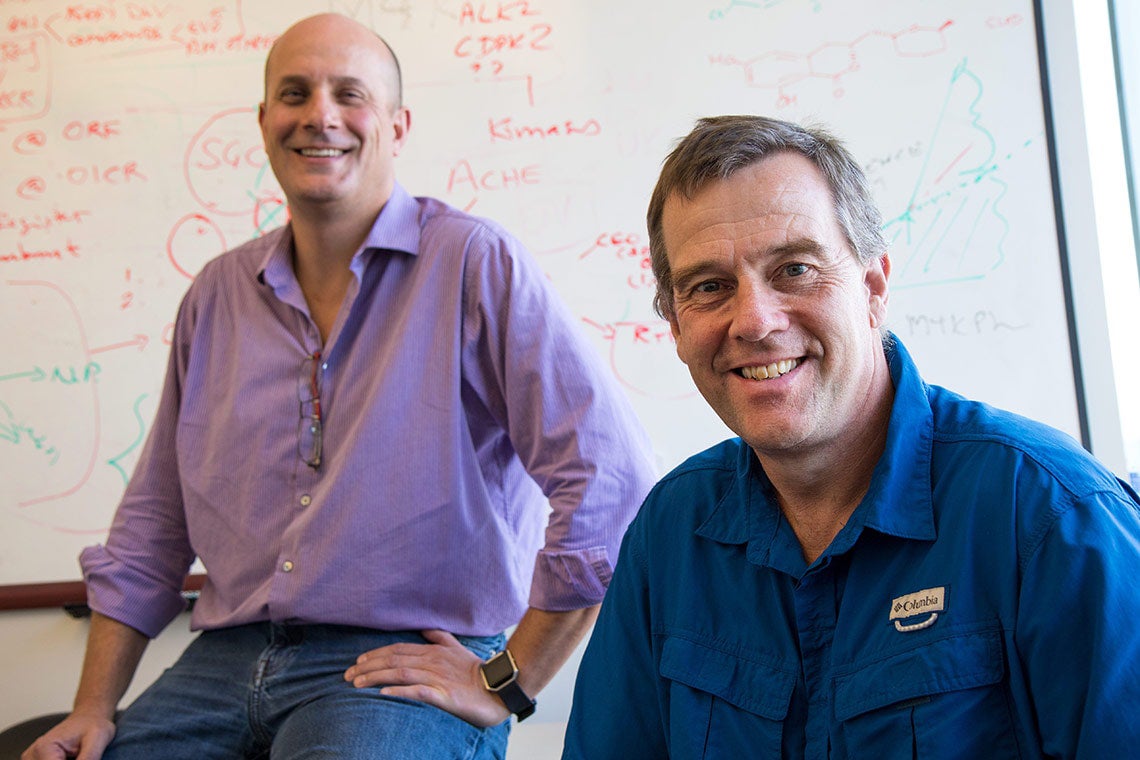 With the help of a $1.5-million grant, U of T's Aled Edwards (right) and business partner Owen Roberts (left) will forgo patents and profits to tackle diseases like Parkinson's and ALS (photo by Chris Sorensen)

Parkinson’s disease and Amyotrophic Lateral Sclerosis, or ALS, are the newest frontiers for open science drug discovery, a global movement led by University of Toronto researchers that puts knowledge sharing and medication affordability ahead of patents and profits.

It will be the world’s second drug discovery company committed to open science after Medicines 4 Kids, or M4K Pharma, which was launched by U of T's Aled Edwards and business partner Owen Roberts in 2017 to develop a novel drug for an uncommon but fatal childhood brain cancer.

“When we started M4K, many people thought an open approach to late-stage drug development might only be applicable to rare or neglected diseases, if at all,” says Edwards, a professor of molecular genetics in U of T's Faculty of Medicine. “But we’re getting unexpected funding and scientific contributions from industry, academic and clinical sources, and slowly but surely we’re advancing a medicine through the pipeline.

Open science is a way for researchers to speed up scientific discovery by sharing data and knowledge quickly and publicly, unencumbered by patents and the peer review publishing process. The movement gathered force in the life sciences in the 1990s with the Human Genome Project, and spread to protein structures and then early-stage drug discovery through the Structural Genomics Consortium (SGC), which Edwards co-founded and now leads as director.

The non-profit SGC has generated considerable private and public investment and several spin-out companies, but there remains a gap in late-stage drug development.

Like M4K, M4ND will not seek patents on its findings. It will instead rely on regulatory protections available in several countries, including data exclusivity for drug sponsors to prevent generic competition, and orphan drug exclusivity for rare diseases. These and other existing protections, says Edwards, are likely sufficient to attract commercial partners willing to manufacture, distribute and sell medications at reasonable prices.

As well, M4ND will also be owned by the Agora Open Science Trust, a Canadian charity that supports open science for the public good.  M4ND will donate any proceeds generated through commercial partnerships back to the charity.

The researchers will share their progress with the scientific community through regular online meetings that are open to all and posted on YouTube. They will also make data widely available – for example through the SGC’s open lab notebooks initiative.

“Every player in the system appreciates the idea of affordable medicines faster, but it’s been incredibly challenging to make it happen because the system is complicated,” says Edwards.

“The key was to invent a different business model, and we’re extraordinarily happy that industry, academia and others have been delighted to contribute.”

With a file by Heidi Singer