U of T researcher recognized with Royal Society’s McLaughlin Medal 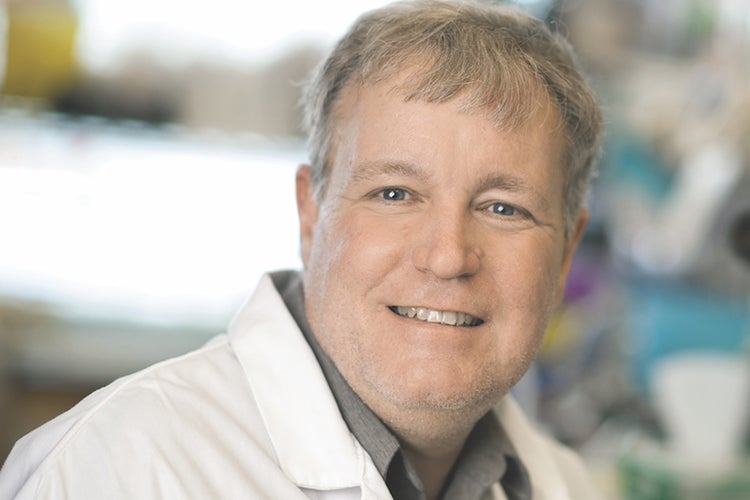 A  University of Toronto researcher who studies how cells communicate with each other and how that interaction goes awry in cancer and other diseases has been honoured with a prestigious award from the Royal Society of Canada.

Dr. Jeffrey Wrana, a professor in the department of molecular genetics at U of T and a senior investigator at Sinai Health System’s Lunenfeld-Tanenbaum Research Institute, today was named recipient of the McLaughlin Medal – which recognizes sustained excellence in medical science and is one of just 12 research awards the society granted this year.

“It’s a pleasant surprise and quite an honour to receive this award, because the competition is so fierce,” says Wrana, who has been at U of T and Sinai for almost two decades. “There are many more good scientists than awards.”

Wrana’s work has led to several breakthroughs in cell signalling and the molecular understanding of cancer. He was the first to discover the molecular pathway for a type of protein that influences how cells respond to their microenvironment, called transforming growth factor beta, or TGFB. His work also showed how this pathway interacts with other pathways to form higher-order networks, which in turn produce a remarkable diversity of tissues and biological functions.

As well, Wrana created a “next-generation” robotics facility called SMART Lab, based at Sinai but accessible to researchers across Toronto, which enables the analysis of thousands of genes and their functions simultaneously. That lab is now a key part of the Network Biology Collaborative Centre, a national platform for functional genomics and proteomics.

“Everything that Jeff has touched at the Lunenfeld-Tanenbaum Research Institute has resulted in moving us forward – from his signal transduction research to his establishment of our high throughput screening facility to building the field of network biology,” says Jim Woodgett, director of the Lunenfeld-Tanenbaum Research Institute who is also a professor of medical biophysics at U of T. “This has kept both his lab and his many colleagues here ahead of the research curve. If you want to know what’s next, ask Jeff.”

One thing that’s next for Wrana is moving his basic research into the clinical realm. In 2017 he became one of three founding scientific directors for Fibrocor Therapeutics, a Toronto-based company that will search for and develop drugs to treat fibrosis, or scarring, in the kidney and other organs. Fibrocor is a collaboration among MaRS Innovation, St. Michael’s Hospital and Evotec, a global drug-discovery company.

“We look forward to seeing the results of this new industry partnership over the next few years, which will build on leading-edge technology developed in Toronto to address a pressing global need,” says Trevor Young, dean of the Faculty of Medicine at U of T. “At the same time, we anticipate further advances in our understanding of cell signalling networks, thanks to Jeff’s visionary approach to cancer and systems biology.”

The Royal Society of Canada has been promoting the achievements of Canadian scientists, artists and scholars since 1883. Members of the society also mentor young talent and provide advice to governments and non-governmental organizations.