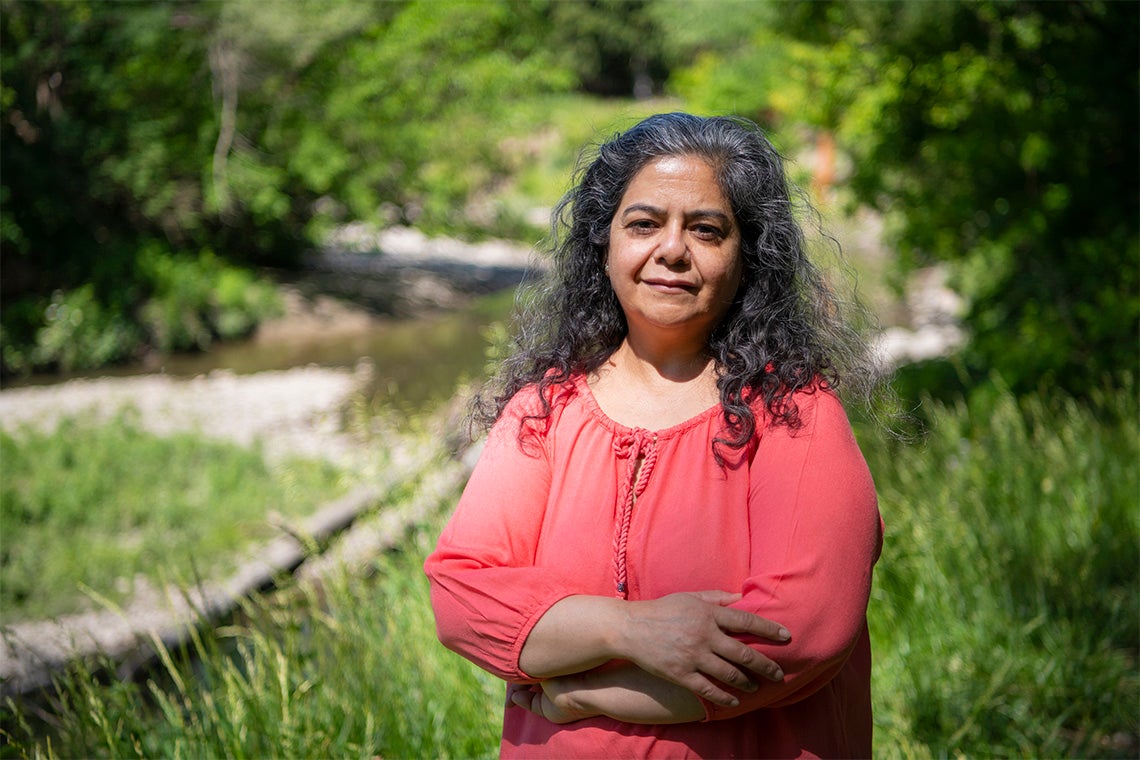 Ambika Tenneti, a PhD student at U of T, is investigating community engagement in the city’s urban forests, looking specifically at factors that lead to inclusion or exclusion among immigrant communities (photo by Don Campbell)

When it comes to ensuring access to Toronto’s urban forests, Ambika Tenneti says simply living near a tree canopy is insufficient for many city residents.

“Access is not just about proximity,” says Tenneti, a doctoral student in the forestry department at the University of Toronto’s John H. Daniels Faculty of Architecture, Landscape, and Design.

People may live near a ravine, but if there’s no entrance near where they live and they have to walk, bike or take the public transit before getting into it, then it’s not accessible, she says. She notes that such trips also cost time and money, which recent immigrants often lack when they first arrive.

There can also be psychological barriers that prevent people from enjoying the ravines and other natural areas in the city – which is where Tenneti’s research comes into play. As a recent immigrant to Canada from India, where she studied environmental science, Tenneti investigates community engagement in the city’s urban forests, looking specifically at factors that lead to inclusion or exclusion, with a focus on the experience of new immigrants.

Her research suggests that immigrant communities are interested in urban nature, and enjoy it, but tend to prefer parks over wilderness areas. She says that, in general, immigrant communities feel more comfortable going to well-maintained, multi-use green areas where children have access to playing fields and other amenities such as seating, equipment, trees and gardens. Access to washrooms and drinking water are also important for planning family outings.

She points to Morningside Park in Scarborough, which is a popular destination for nearby residents – especially during the annual salmon festival or other summer events.

“It is a beautiful park with a lot of amenities, but it’s also not easily accessible,” says Tenneti, whose PhD supervisor is U of T Scarborough Associate Professor Nicole Klenk, who is an expert on the role of environmental science in society. She adds that the park is only accessible by car or bus, and once people arrive at the nearest bus stop, they still need to walk about 200 meters down a steep incline into the valley – a major challenge for children, older family members or those using a wheelchair or other mobility devices.

Wilderness areas such as ravines are also relatively unknown to recent immigrants, Tenneti says, adding that they are often described as “hidden gems” or “secret spaces” by long-time residents of the city – the majority of them white, affluent residents who live nearby.

“These remain a secret by lack of access, and a lack of knowledge and awareness among ethnically diverse immigrant communities,” says Tenneti. “Ravines are meant as throughways for walking, hiking or biking, but often these community members don’t see themselves engaging in these activities and this makes them hesitant to use ravines.”

One misconception is that immigrant communities fear wilderness areas because of bears. “That’s not so,” says Tenneti. “The immigrants I have spoken to know there are no bears in Toronto. Their fear stems from other factors such as getting lost or not finding the exits, especially in trails and woods.”

She says fear of getting robbed or attacked, off-leash dogs, coming across people indulging in inappropriate behaviour or activities are also a concern.

There is also fear stemming from a lack of ecological knowledge about nature in the Greater Toronto Area. Immigrants may hear about ticks, coyotes, giant hogweed and poison ivy, adds Tenneti, but many don’t know how to recognise such threats or what to do if they come in contact with them. Tenneti says immigrant communities are keen to learn how to identify plants that they need to be wary of – as well as those they need to protect – but the necessary resources are seldom available.

“One fear that surprised me was ‘the gaze’ or ‘the look,’” Tenneti says. “This was shared by Muslim and Black youth who said they were comfortable going to parks and ravines in their neighbourhoods, but not in white-dominant areas. Despite no one saying anything, they felt othered and uncomfortable.”

Another issue is that education organizations tend to focus on engaging children and youth, but not necessarily the adults who often decide where kids and other family members will go for a walk or outdoor recreation.

For the city’s urban forests and canopies to thrive and be representative of its diverse population, Tenneti says it is important to make the necessary investments in the city’s ethnically diverse neighbourhoods. In addition to having proper signage, trails, garbage bins, public washrooms and seating, she says there is a need to engage people in stewardship activities, organize outdoor education workshops and leaning activities, and actively promote participation. Such programs should also be shared through local community centres, settlement agencies and ethnic media organizations.