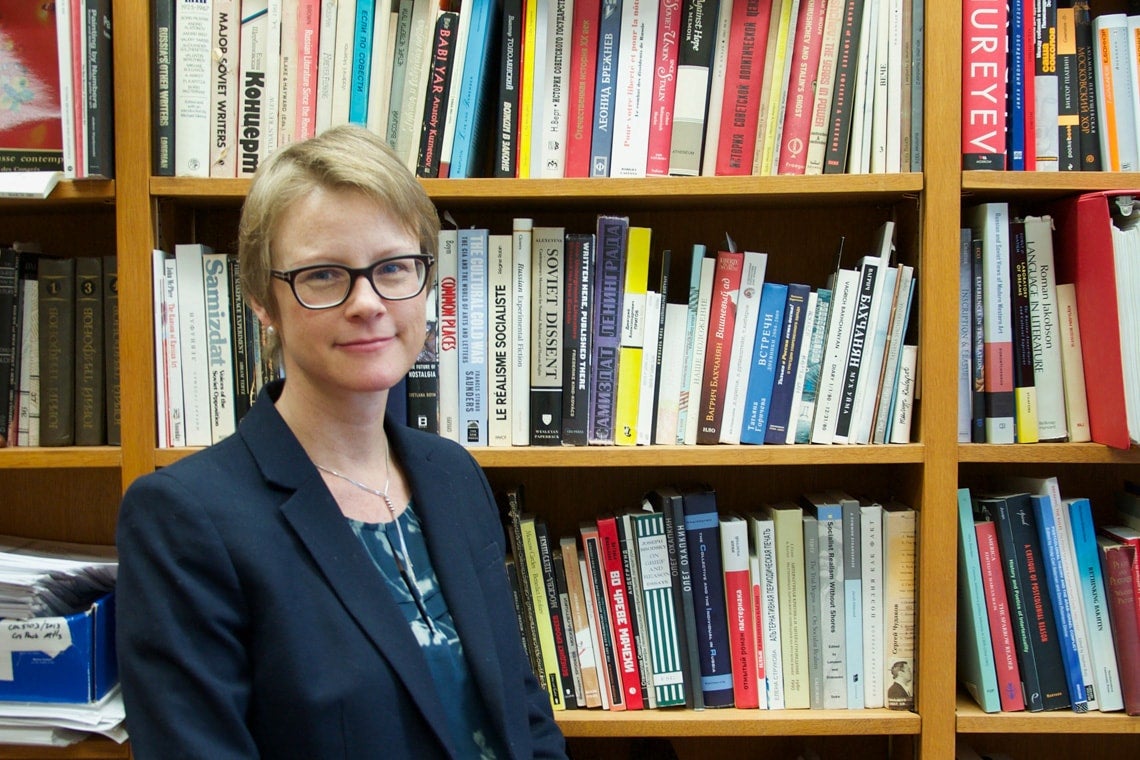 Ann Komaromi: “In the same way they didn’t want to be a stooge of the system, today we should be aware of the dangers of being a cog in the wheel and serving hidden interests who want to circulate harmful messages” (photo by Diana Tyszko)

There are important parallels between a Soviet-era dissident movement and the modern digital culture that helped Donald Trump gain power, says Associate Professor Ann Komaromi of the Centre for Comparative Literature at the Faculty of Arts & Science.

Komaromi recently won the 2016 AATSEEL award for her book, Uncensored: Samizdat Novels and the Quest for Autonomy in Soviet Dissidence. Samizdat writers were focused on their responsibility as citizens to challenge the propaganda and hypocrisy of the USSR, the communist state that included modern day Russia before it dissolved in the 1990s.

Authors such as Vasilii Aksenov, Andrei Bitov, and Venedikt Erofeev broke with official taboos by writing about things like rampant alcoholism and anti-Semitism while being rigorously self-reflective about their own generation’s complicity in the Soviet system.

“I think they were trying to convey something important to us about being careful of the more insidious forms of control we encounter,” said Komaromi, who will receive the award at a ceremony in San Francisco in February.

“In the same way they didn’t want to be a stooge of the system, today we should be aware of the dangers of being a cog in the wheel and serving hidden interests who want to circulate harmful messages.”

Trump’s social-media fuelled populist appeal presents the same kind of dangerous cult of personality the samizdat warned against in the era after the death of Joseph Stalin, the strongman leader who ruled the Soviet Union with violence and terror.

Instead of being passive consumers or tools of manipulation, people should guard against the intoxication of social media echo chambers sharing conspiracy theories without any reflection or analysis, she said.

It is nothing less than our responsibility as citizens in an Internet culture.

“Since everyone now participates in passing on information on social media, the important thing to learn from this is the critical self-awareness about how you work within the system in a responsible and reflective way.”

Samizdat writers were limited by a decidedly lower-tech version of the peer-to-peer sharing and publishing offered so effortlessly by the Internet.

They wrote their stories on typewriters and circulated them to friends in the hopes they would make copies and pass them on to others.

Komaromi has helped create a U of T digital archive that includes rare samples of some original manuscripts and art from samizdat novels, much of it typed on fine onion paper with graphics painstakingly crafted by hand. Although not as well known in the West as celebrated authors such as Alexander Solzhenitsyn and Andrei Sakharov, the best of the samizdat writers were popular and influential in the Soviet Union between the late 1950s through to the late 1980s.

While the dreaded KGB secret service and Gulag forced labour camp system still existed, this period in Soviet history was somewhat more permissive than it had been in the Stalin era.

Stalin’s successor Nikita Khrushchev personally approved the publication of Solzhenitsyn’s classic One Day in the Life of Ivan Denisovich, although that was a rare exception. By comparison, samizdat writers were often harassed and threatened by the KGB.

Rather than indict communism and the Soviet system as Solzhenitsyn did, these samizdat writers criticized society in fictionalized, semi-autobiographical books. Nonconformist poets and artists also used samizdat to experiment in ways not allowed by socialist realism as they were written, noting the constitution was full of liberties and rights that were ignored.

It is an area of study Komaromi has had largely to herself, but she says the award signals a growing interest in late Soviet culture.

“I think I was doing my research a little bit ahead of the curve of interest, and I’m glad this brings a little more visibility to my work, because it probably means there will be more people to work with now.”