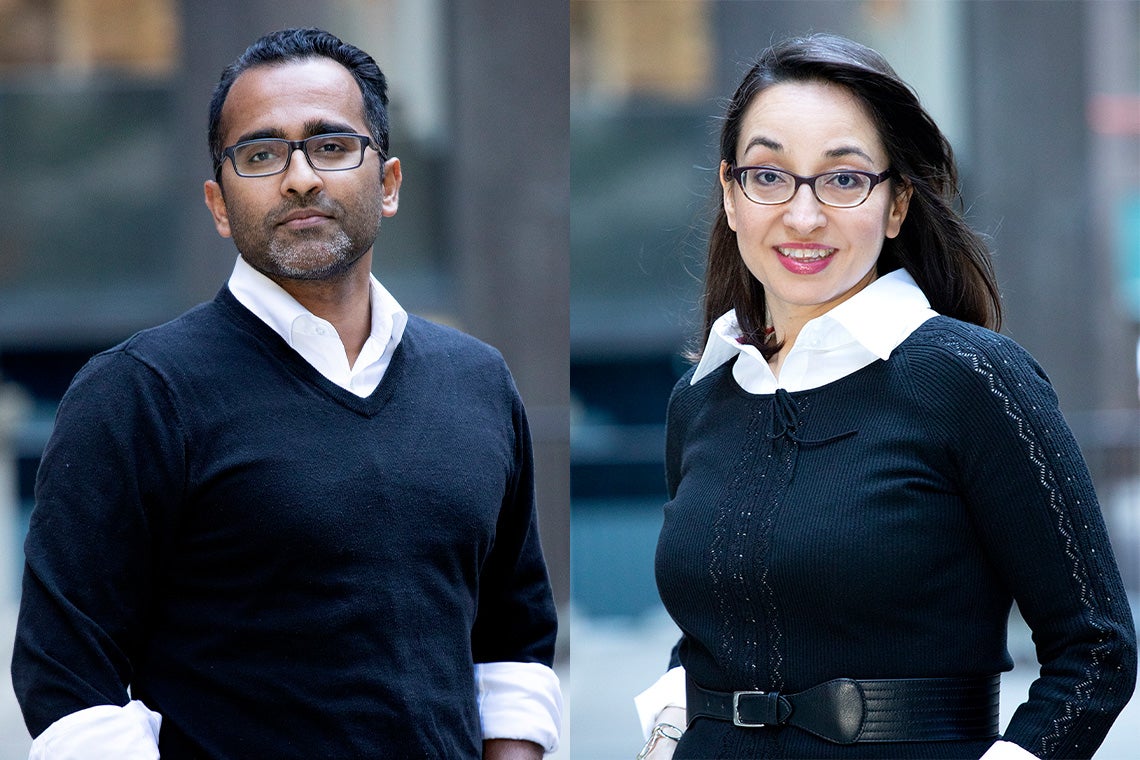 MOLLI Surgical was launched in 2018 by Ananth Ravi (left), an associate professor in the Temerty Faculty of Medicine, and U of T alumna Fazila Seker (right), who serves as president and CEO of the company (photos courtesy of MOLLI)

The technique developed by MOLLI Surgical involves implanting a tiny sesame seed-sized magnet in the breast to mark the location of the tumour, thereby eliminating the need to insert so-called “hook wires.”

The approach results in less pain for patients, more accuracy for surgeons and a more streamlined process that could reduce surgery backlogs caused by the COVID-19 pandemic.

“What we set out to do is to really simplify health care so that more patients can get the care that they need quickly,” says Seker, the company’s president and chief executive officer.

Seker launched the company in 2018 with Ravi, an associate professor in the department of radiation oncology in the Temerty Faculty of Medicine. At the time, Ravi was working at Sunnybrook Health Sciences Centre, one of U of T’s partner hospitals. Three years later, the technology has been cleared by the U.S. Food and Drug Administration and licensed by Health Canada for sale in North America.

Ravi, who has since left Sunnybrook to take on the role of chief science and clinical officer with MOLLI Surgical, says the inspiration for the invention came about during a casual conversation at a barbecue with a surgeon who wanted a less invasive, more accurate way to locate lesions within the breast.

“Improvements in screening and imaging technology allow care teams to spot smaller and smaller tumours, even before they’re palpable,” says Ravi. “But the way surgeons take out these tumours remains the same. They can’t rely on touch alone to identify where it is.”

Breast cancer care teams currently insert a wire into the breast to mark the tumour location. The procedure, which is described by some patients as traumatic and painful, is done on the day of surgery. Patients then wait at the hospital for their surgery appointment, often for hours, with a protruding wire that is painful and can be dislodged by catching on clothing, leading to inaccurate surgical outcomes.

MOLLI Surgical’s technology, by contrast, is far less invasive. Once the tiny magnet has been implanted, care teams use the MOLLI Surgical wand and tablet technology to locate the tumour for removal.

The procedure pinpoints lesions with greater accuracy, allowing surgeons to remove tumours in their entirety with better cosmetic outcomes for the patient. And, unlike the hook wire, the magnet can be implanted up to 30 days before surgery.

“MOLLI is fully implanted, so there’s no needless waiting at the hospital, which is required with the wire,” says Seker.

Cutting down on time spent in hospital is especially important during COVID-19, when patients fear of exposure may cause them to delay treatment.

The technology also helps to streamline the process for care teams. Ravi likens the care team, which includes radiology, pathology and surgery, to a three-legged stool. If something goes wrong with one leg, such as an unexpected delay, the whole structure is set off balance.

But because the magnet can be inserted up to 30 days prior to surgery, each part of the care team can do their work individually without having to co-ordinate schedules or patient transfers within the hospital.

“It improves capacity and takes a load off communication between the different disciplines, allowing them to focus their care and attention on the patient experience, instead of managing administrative tasks,” says Ravi.

Seker and Ravi say the MOLLI Surgical system could help clear pandemic-related surgery backlogs faster than using traditional procedures, noting studies that have shown that similar “decoupling” can increase operational capacity by up to 34 per cent.

“During COVID-19, anything you can do to improve operational efficiency and reduce stress placed on staff teams is something we should look forward to,” Ravi says.

MOLLI Surgical launched after Ravi met Seker to discuss the promising new technology. Seker, who was then director of venture development, medical devices with MaRS Innovation, thought the idea had great potential.

“It wasn’t technology in search of a problem,” she says. “It was a tailored solution to a well-defined clinical problem.”

“Toronto is a hotbed of medical device innovation and working within the constraints of the Canadian health-care system drives cost-effective designs in the industry,” she says. “That’s a real need with the rising cost of health care.”

Canadian philanthropist and entrepreneur James Temerty also saw potential in the technology and came aboard as an early investor when the company launched in 2018.

Seker, who is an alumna of U of T’s chemical physics program, says her time at U of T helped to prepare her for this career path.

“Chemical physics helped me develop the critical thinking skills and the ability to navigate tough problems and questions,” she says. “It was a terrific foundation for what I’ve been able to do since then.”

Ravi, who is also a U of T alumnus, began his education as an undergraduate in U of T’s engineering science program in the Faculty of Applied Science & Engineering. A co-op placement with Sunnybrook convinced him to pursue biomedical engineering, leading him to a PhD in medical biophysics and residency in medical physics.

“The profession is one where you can innovate and develop new things that have a profound and immediate impact on patient care,” he says. “MOLLI is an extension of that.

“The U of T ecosystem is wonderful for innovation and translation of cutting-edge technology into clinical practice and commercialization. It connects people with disparate disciplines to collaboratively work together with engineers and technical teams to build a device that addresses a very particular need.”

While MOLLI was designed initially for breast cancer care, Seker is excited about the potential for broader use of the device.

“MOLLI is a finding technology,” she says. “It’s not restricted to breast or oncology uses, but any general surgery application.”