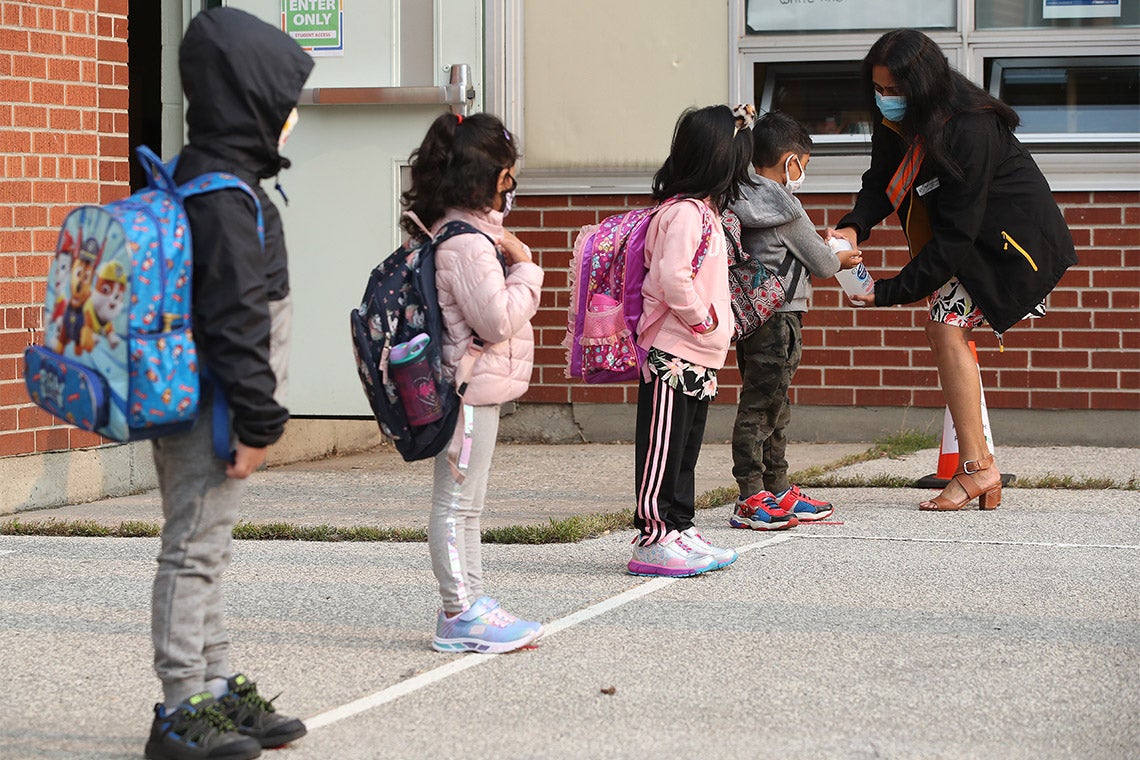 Researchers at the University of Toronto have found that immune cells from the upper respiratory tracts of children, taken years before the pandemic began, react with the virus that causes COVID-19.

The findings hint at a possible reason why children with COVID-19 are often asymptomatic or have mild symptoms, while many adults experience severe disease and even death.

“We isolated B cells from tonsil tissues collected from children over five years ago, and found that some are reactive to the SARS-CoV-2 spike protein,” said Goetz Ehrhardt, principal investigator on the study and an associate professor of immunology at U of T’s Temerty Faculty of Medicine.

“We found that antibodies generated from these B cells have neutralizing potential against the virus in lab experiments, reducing the ability of the spike protein to bind to its target protein on the cell surface.”

The study, published in the Journal of Immunology, is one of just a few to examine the role of the mucosal immune system in COVID-19. Other studies have looked at immune components in the blood – often after infection has taken hold or during recovery.

Mucosal surfaces comprise one of the largest components of the immune system and include the gut, urogenital tract and respiratory system – all of which teem with microbiota including bacteria, viruses and fungi.

The researchers at first assumed the B cells reacted to SARS-CoV-2 because they had encountered similar coronaviruses in the past, perhaps through common colds and other infections.

But the antibodies did not react to those coronaviruses in further testing, although they did share genetic sequence characteristics linked to other triggers.

Taken together, Ehrhardt said, the results suggest cross-reactivity in the B-cell antibodies. “The immune system makes these antibodies toward certain agents or pathogens and as a by-product the antibodies react to SARS-CoV-2,” he said. “It will be interesting to find out what causes that reaction.”

A better understanding of the antibody reaction could shed light on the mystery of COVID-19 susceptibility in children and adults and inform clinical and public health decisions as well as therapeutic approaches.

Whatever the cause of the reaction, it is likely due to a common element in the childhood environment: all samples tested had the SARS-CoV-2-reactive B cells, many of which the researchers observed among the immune systems' ‘naïve’ or newly generated B cells that had not encountered any pathogen.

“One explanation is that some of these B cells react to triggers in the microbiome,” said Yanling Liu, lead author on the paper and a senior research associate in Ehrhardt’s lab.

“Or it could still be that antibodies are reacting to endemic coronaviruses and we just didn’t see that,” Liu said. “We don’t really know, but one implication of our work is that it suggests children should respond to vaccines very well since they have those naive B cells ready to recognize vaccine in their lymphoid tissue.”

Several other researchers were key to the study, Liu and Ehrhardt said, including James Rini, a professor of biochemistry and molecular genetics at U of T who provided purified spike proteins from viral samples.

Amin Zia used computational biology to scan large databases and predict which antibodies would react to the virus. Zia was a post-doctoral researcher in the lab of Alan Moses, a professor in U of T’s departments of cell and systems biology, ecology and evolutionary biology and computer science in the Faculty of Arts & Science.

“About half the antibodies we generated were based on computer-generated predictions,” said Ehrhardt. “That was first for us, and it won’t be a last.”

Researchers at the Hospital for Sick Children, with whom Ehrhardt’s lab has collaborated for years, supplied the tonsil tissue samples.

“Mucosae are no doubt a very important interface for the immune system’s response to a great variety of pathogens, but availability of samples has been a major impediment,” said Ehrhardt. “Research in this area is gathering steam, and it will be interesting to see where that takes us.”

The research was funded by the Canadian Institutes of Health Research.