This U of T PhD student is fostering public trust in science, one selfie at a time 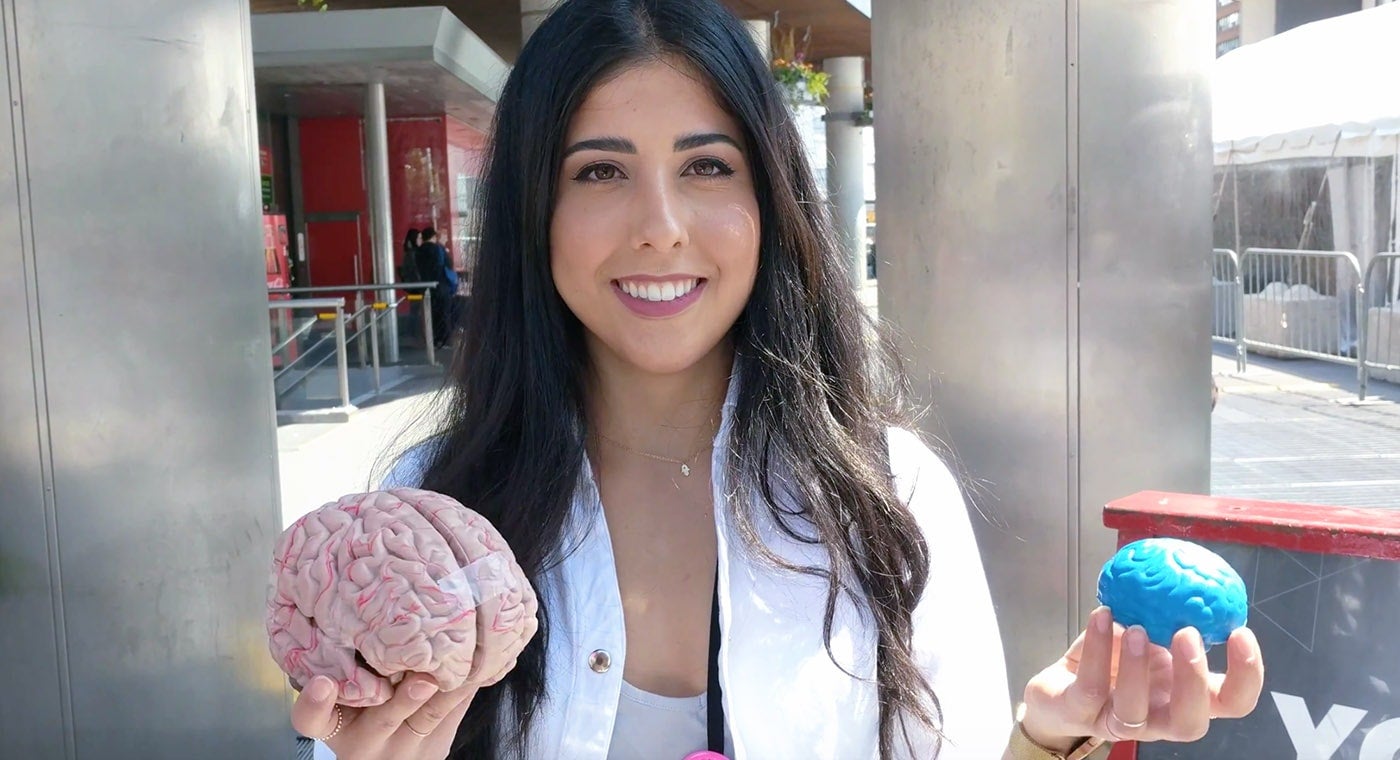 Samantha Yammine, a PhD student who studies how the brain is formed, engages daily with her massive social media following – she has more than 14,000 followers on Instagram and Twitter combined (photo courtesy of Samantha Yammine)

On any given day, with a smartphone in hand, Samantha Yammine might be debunking science myths, arguing why evolution works or giving career advice to aspiring scientists, all the while running experiments to complete her PhD. And taking selfies.

Yammine, who studies how the brain is formed in the laboratory of Derek van der Kooy, a professor in the department of molecular genetics and U of T's Donnelly Centre for Cellular and Biomolecular Research, engages daily with her massive social media following – she has more than 14,000 followers on Instagram and Twitter combined – through stories about her own research and on all things science.

This past August, Yammine and fellow online science communicators  launched the Scientist Selfies project, a crowd-funded social media experiment that aims to find out what makes a scientist trustworthy and how this knowledge can be used to give a much-needed boost to public trust in science.

A recent survey commissioned by the Ontario Science Centre revealed that almost half of Canadians believe that the science behind global warming is unclear or unsettled, and one in five Canadians still think the long-discredited link between vaccines and autism is true. Overall, one in four Canadians said that science is a matter of opinion.

Another study found that, in the U.S. at least, the public sees scientists as knowledgeable but not trustworthy, similar to the way lawyers are perceived. Adults in the U.S. have also been reported to see scientists as “robot-like and lacking emotions, as well as valuing knowledge over morality and being potentially dangerous."

“I think we scientists are partly to blame,” says Yammine. “Most of our research is funded by public money but we don’t often share the findings of our research back with the public. And when we do, we don’t always do it in the best way. Compelling science communication requires more than just factual information, it requires a compelling speaker too, and one of the most important components is trust,” she says.

Using a #ScientistsWhoSelfie hashtag, the team launched a social media campaign to promote their study, soliciting more than 1,265 images from scientists all over the world. Posted on Instagram, the images show researchers at work – in the lab or in the field. One image shows, for example, a researcher in a lab holding a bucket full of ice for keeping reagents cool. In another image, a researcher is handling a venomous snake in a jungle.

The photos of the scientists and their research object, both a selfie and a snaphot taken by another person, will be accompanied with a picture of the research object alone. All three images will have the same scientific caption and the public will then be the asked to rate each researcher’s trustworthiness, warmth and competence, based on their gender, age, skin colour and whether or not the image was a selfie.

The data should offer insights into whether or not, say, a female scientist who takes a selfie at the lab bench is seen as equally warm and competent as a male. Or if, for example, selfies increase warmth but decrease perceived competence.

Does Yammine think men and women will be judged differently? “My prediction is that unfortunately young females who selfie will likely be rated as less competent,” she says.

Nothing irks Yammine more than when people make assumptions about her based on the way she looks. With an unapologetic fondness for fashion and makeup, she found it “annoying that a lot of people who display more stereotypically feminine traits like me don’t get treated with the same automatic respect as my other colleagues do.” That’s not to say that the beauty industry is off the hook –Yammine has openly criticized an advertising campaign by a makeup company urging girls to “Skip Class, Not Concealer.” She responded with the #SkipBenefitNotClass campaign, calling on the public to boycott the company, which was seen by millions across Twitter and Instagram.

Through the Scientist Selfies project and her own social media posts, Yammine is shattering the stereotype of a typical scientist as white and male in a way that could help attract more women into STEM (science, techology, engineering and mathematics).

As a vocal supporter of Canada's Fundamental Science Review, led by U of T President Emeritus David Naylor, which advocates for stronger support of basic research in Canada, Yammine has helped raise awareness among her social media followers about the importance of basic science.

“Basic biology research is losing a lot of funding and so I think I can directly do something about that by using my passion for teaching and communicating to get more people more excited about supporting basic research,” she says.

With more than 250 posts on Instagram, Yammine has covered a range of topics: from the perplexing complexity of the brain, to the solar eclipse, to science policy and female scientist role models.

The Scientist Selfies project is being crowdfunded on the Experiment platform.