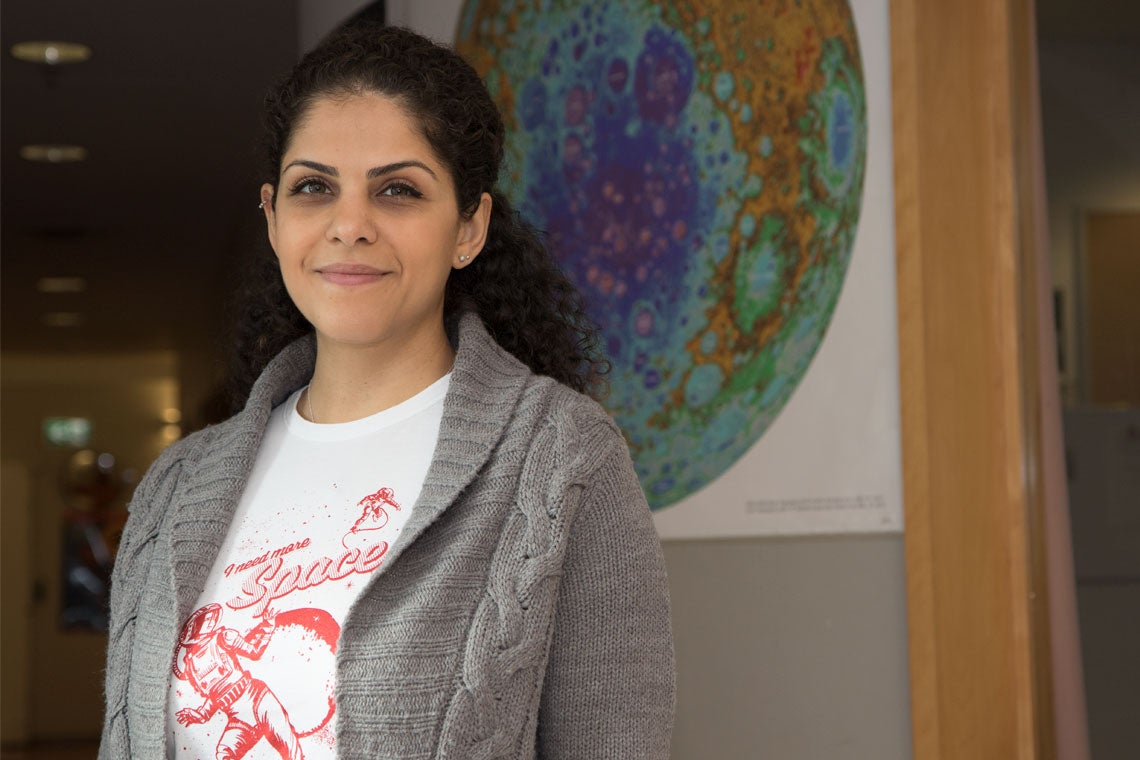 Sara Mazrouei, a U of T PhD candidate in the department of earth sciences in the Faculty of Arts & Science, is one of the conference organizers (photo by Romi Levine)

This isn’t your average scientific conference.

The inaugural Women in Planetary Science and Exploration conference, being held at the University of Toronto on Feb. 17 and 18, is not only highlighting the research of women across multiple scientific disciplines but is also creating dialogue about issues that have been dominating headlines, such as sexual harassment, sexuality and race.

“These are issues that are really important that affect pretty much all of us on a day-to-day basis, but there's never a chance to really talk about them,” says Sara Mazrouei, a U of T PhD candidate in the department of earth sciences in the Faculty of Arts & Science and one of the conference organizers.

Mazrouei, along with David Hamilton, a space physicist and professor at Conestoga College, and Tanya Harrison, director of research for Arizona State University’s Space Technology and Science Initiative, founded the conference to provide a place for women to showcase their work and to create opportunities for collaboration.

The conference, which Mazrouei says is the first of its kind, has attracted scientists from all over Canada and the United States.

“As soon as we started advertising for it, there was a lot of interest and a lot of positive feedback,” she says, adding that she was surprised so many people were willing to brave Toronto’s frigid winter temperatures.

The conference is a chance for students to rub shoulders with some of the leading women in the field and listen to them talk about opportunities inside and outside of academia, says Mazrouei.

“It's going to be less formal and they're going to see people that look like them and get a chance to talk to them and build the networking aspect,” she says.

After reaching out to Prime Minister Justin Trudeau and Ontario Premier Kathleen Wynne, the conference organizers say they received personalized messages from both leaders to pass on to attendees, stressing the importance of the topics of discussion and supporting women in STEM (science, technology, engineering and mathematics).

Tanya Kizovski, an earth sciences PhD student and one of the conference's presenters, will talk about a Martian meteorite and how it formed on Mars.

“It’s all about looking for when there could have been habitable climates on Mars in terms of looking for life, which is the ultimate goal in terms of studying Mars,” she says.

Kizovski says she is looking forward to participating in a conference that empowers women in science.

“It's going to be great to learn from and hear from people who are not only in your field, but maybe have had the same or very similar experiences to you in a professional sense,” she says.

With widespread accusations of sexual harassment and assault across many industries, and the rise of the Time’s Up and #MeToo movements, it has become clear that the STEM fields are no exception.

Mazrouei recognizes that the conference’s panel discussions about sexual harassment, LGBTQ+ issues and race “won’t solve everything. … They’re just 45-minute panels to get the discussion started with the hope people will carry on the talks and conversations when they go back to their institutions.”

Cailin Gallinger, an earth sciences master’s student, will be participating in a panel discussion about LGBTQ+ issues in STEM and hopes to have a meaningful conversation about how open people feel they can be about their sexuality in their discipline and about the importance of addressing intersectionality.

When discussions like this take place at scientific conferences, they're usually attended only by a small group of people, Gallinger says. But she hopes this conference will expose a wider audience to different perspectives.

“People who aren’t directly affected by these issues are able to come and listen to women and non-binary people talking about these issues and having a dialogue not just within themselves but with other people in these communities and STEM fields who otherwise are not likely to hear about or be able to talk about these issues,” Gallinger says.

Mazrouei and her colleagues hope the conference will become an annual event and say Arizona State University has already offered to host it in 2019.