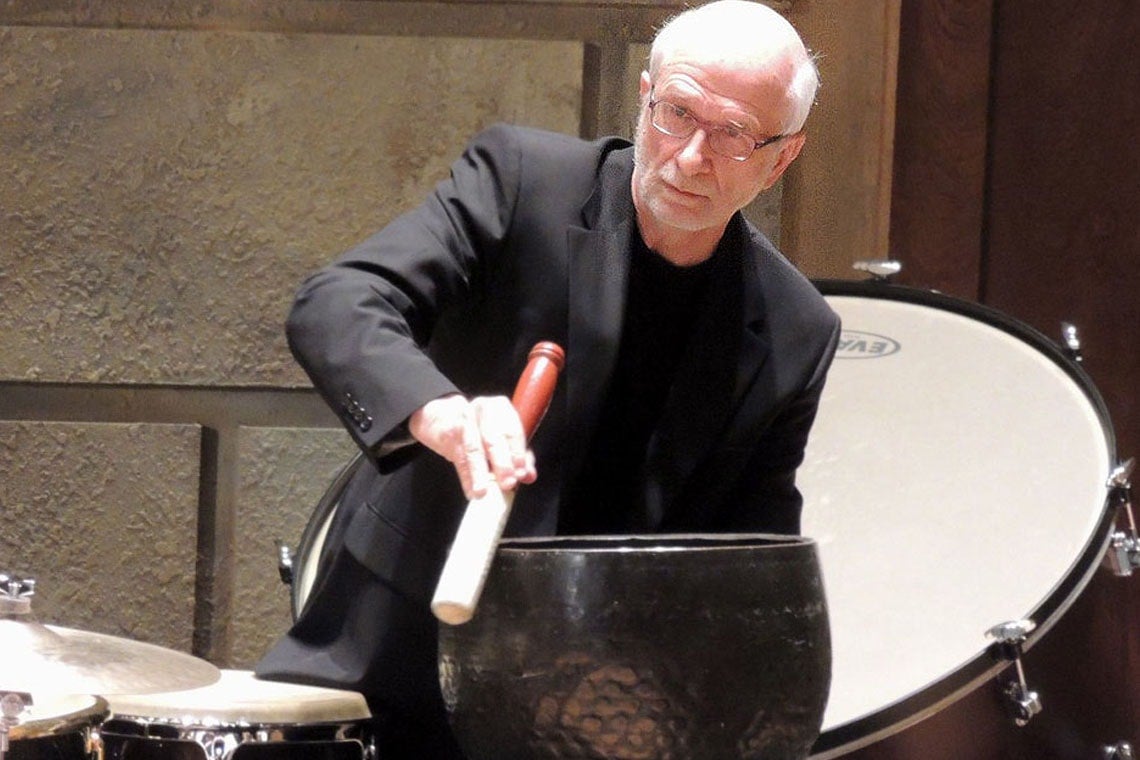 One of the most prominent figures in the field of percussion performance, U of T Professor Emeritus Russell Hartenberger has been awarded the 2017 Leonardo da Vinci World Award of Arts.

“This recognition is for his lifetime commitment to cultivating and shaping our understanding of music and performance across cultures and genres, respecting the diversity of world traditions,” said the World Cultural Council in a news release.

The award also recognizes the former dean of the Faculty of Music’s “commitment to teaching and inspiring new generations of young musicians and scholars” and for being “a virtuoso soloist whose technical mastery encompasses virtually every percussion instrument imaginable.”

“I’m deeply honoured to receive the Leonard Da Vinci World Award of Arts from the World Cultural Council. While it is personally humbling to receive this acknowledgment, I feel that the award is a recognition by the WCC of the significance of percussion in the musical world today,” Hartenberger said.

“I also want to thank the Faculty of Music and the University of Toronto for providing the support that has allowed me to pursue a multifaceted career in music. The performers, educators, composers, researchers and students have been inspirational to me as I have pursued my various dreams.”

In 1966, Hartenberger received his bachelor's degree from the Curtis Institute of Music, where he studied with Fred D. Hinger. He completed his master's degree in 1969 from The Catholic University of America. In 1974, he received his PhD in world music from Wesleyan University, venturing into a range of instruments, including mridangam with Ramnad Raghavan of South India, tabla with Sharda Sahai of North India, Javanese gamelan with Prawotosaputro and West African drumming with Abraham Adzinyah.

Hartenberger is also the author of Performance Practice in the Music of Steve Reich (Cambridge, 2016) and editor of The Cambridge Companion to Percussion (2016).

“This award is well-deserved recognition for an outstanding career that has seen Professor Emeritus Russell Hartenberger not only push the boundaries of his field in music but also help develop other young musicians here at the University of Toronto,” said Vivek Goel, vice-president of research and innovation. “We’d like to congratulate Professor Hartenberger and thank the World Cultural Council for this incredible honour.”

Since 1984, the WCC has granted prizes to outstanding scientists, educators and artists whose breakthroughs in the fields of knowledge, learning and research have contributed positively to the cultural enrichment of mankind.

Each of the World Cultural Council’s three international awards have now been won by U of T scholars and artists.

In 2011, the Albert Einstein World Award of Science went to Geoffrey Ozin, University Professor of chemistry in the Faculty of Arts & Science and Canada Research Chair in nanochemistry.

In 2006 the José Vasconcelos World Award of Education went to Professor Marlene Scardamalia at U of T’s Ontario Institute for Studies in Education.

This year, the awards ceremony will take place on Nov. 8 at Leiden University in the Netherlands.