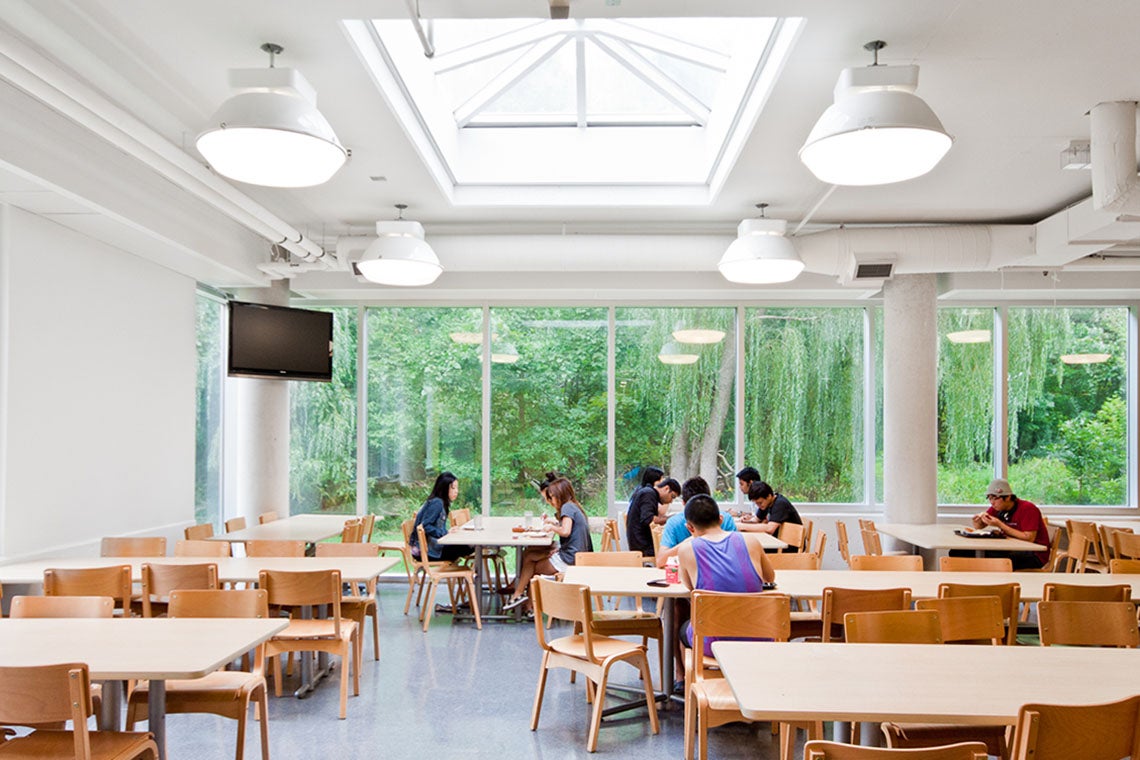 Students take a break for a meal at U of T Mississauga, which is the first university campus in the country to receive a silver designation from the non-profit Fair Trade Canada (photo by Scott Norsworthy)

The University of Toronto Mississauga has become the first campus in Canada to receive a silver designation from Fair Trade Canada.

The designation by the national non-profit organization helps cement U of T Missisauga’s reputation as a leader in sustainable and progressive food services. In 2016, U of T Mississauga also became the first campus in Canada to offer a gluten-free food station.

“UTM  has a commitment to sustainability, so it makes sense to incorporate that goal into food services on campus,” says Sarah Holden, project manager for the fair trade initiative and a marketing and communications strategist with U of T Mississauga’s Hospitality & Retail Operations team.

“This commitment to fair trade provides the UTM community with dining options that support the rights of producers and standards for environmental protection.”

U of T Mississauga achieved a bronze designation from Fair Trade Canada in 2016 by offering fair trade teas, coffees and sugar at catered events and non-branded food outlets across campus, and using fair trade ingredients in its kitchens. The initiative proved so successful that U of T Mississauga’s Hospitality & Retail Services team was encouraged to pursue the next level of designation.

To meet silver designation requirements, culinary director and chef Donna Tobias expanded the program, launching a Fair Trade Café in Maanjiwe nendamowinan and a new Fair Trade Corner in the revamped Meeting Place. Now, all tea and coffee offered at non-branded campus food stations are certified fair trade, including an expanded menu of loose leaf and bag teas. Sugar offered at the stations is also now exclusively supplied by fair trade-certified producers, as is the cinnamon and cocoa used in kitchens. In some cases, U of T Mississauga has surpassed the requirements set by Fair Trade Canada, such as offering five types of fair trade chocolate instead of the required three. Fair trade beverage supplier Doi Chaang Coffee Company supported the educational requirement by hosting coffee tasting and information sessions.

Tobias has been instrumental in supporting the program by sourcing fair trade suppliers for food services and in developing recipes to support the program. In the fall, she developed a bespoke granola bar recipe that uses 80 per cent fair trade and local ingredients, including cocoa, sugar and cinnamon – plus honey from the U of T Mississauga bee hives. Tobias hopes to make the signature treat available in the coming months.

“We believe in supporting local and sustainable food options. Using fair trade ingredients is part of that commitment,” Tobias says, noting that she also hopes to offer a fair trade fruit in 2020.

“We are committed to providing more options for fair trade goods,” adds Holden, who says the team is investigating suppliers to offer more fair trade goods, including cotton clothing, metals for graduation jewelry, wine and even sporting equipment such as soccer balls and volleyballs. “The UTM community has responded positively, so we know that this is something they care about,” she says.

To celebrate the new silver designation, U of T Mississauga will host a Fair Trade Fair on Jan. 28 in the Great Hall in Maanjiwe nendamowinan where the UTM community can sample fair trade treats and buy goods from certified fair trade vendors.