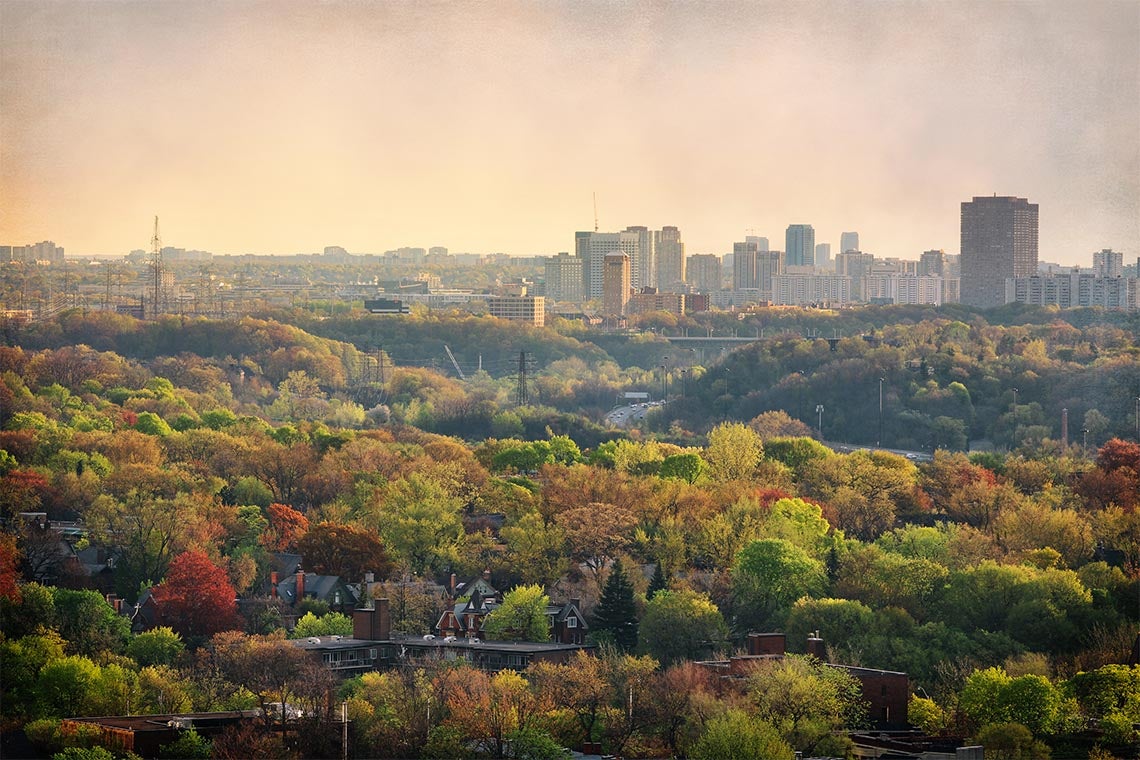 A view of Toronto's Don Valley. A new initiative led by U of T Mississauga’s Centre for Urban Environments will gather real-time data from dozens of sites across the Greater Toronto Area (photo by Katrin Ray Shumakov via Getty Images)

A new initiative led by U of T Mississauga’s Centre for Urban Environments (CUE) will create the first large-scale data collection system to understand the complex relationship between cities, the local environment and global climate change.
“More than 80 per cent of the world’s population lives in cities, but we really don’t understand how cities are changing the environment that we live in, and how this is driving – and being affected by – climate change,” says Marc Johnson, CUE’s director and an associate professor of biology.
“We hope to learn more so we can make cities healthier and more sustainable.”
The centre’s Urban Environmental Network, or UrbEnNet, will gather real-time data from dozens of sites across the Greater Toronto Area. “CUE’s UrbEnNet will provide unprecedented data about how urbanization and urban development shapes the environment that we live in, including the physical environment, the air we breathe, the temperatures we feel and the quality of water we drink, and the impact of this on life,” Johnson says.
“These elements affect every living creature in the Greater Toronto Area, from the salmon swimming up the Credit River to the people living in the urban GTA.”
Johnson points to a heatwave that resulted in the deaths of more than 90 people in Montreal. “In urban areas the lack of green cover means the city areas becomes hot,” he says.
Buildings absorb the sun’s energy and radiate heat, even after sundown. Elevated temperatures can contribute to heatstroke and extra stress on human cardiovascular systems, putting vulnerable people in urban areas at risk.
“If we can better locate the location of heat island or air pollution hot spots, we can create better mitigation strategies and policies to keep people healthier during these events, which are becoming more common as a result of climate change,” Johnson says.
The research team – which includes 38 researchers from U of T – has interdisciplinary expertise in geography, biology, chemistry, robotics and more. Regional conservation authorities and municipal and provincial policy-makers are also contributing partners.
A pilot project, led by Matthew Adams, an assistant professor in U of T Mississauga’s department of geography, is currently managing a mobile pilot project to monitor air pollution levels around the GTA. By collecting real-time data, Adams hopes to pinpoint pollution hot spots.
“This will tell us where we need to focus our attention,” Johnson says.
Monika Havelka, an associate professor, teaching stream, in the department of geography, will use 100 remote wildlife camera traps to capture images and data. “These cameras can help us look at species diversity, population density, as well as seasonal dynamics, demography, and temporal and spatial patterns in activity, behaviour and habitat use,” Havelka says.
“The camera traps have been relatively underused in urban environments, and we hope that they can contribute significantly to our understanding of how wildlife survive and navigate their way through urban environments.”
“The idea is to ramp this up exponentially, to have over 100 bioclimatic stations around the GTA to measure air quality, temperature, soil chemistry and more,” Johnson adds.
In the coming months, CUE’s UrbEnNet will seek federal support for the initiative, which will cost about $18 million. Results will be published in journals and delivered through lectures and public conferences.
“We will also work with policy-makers to help them understand what we’re learning,” says Johnson, who hopes to see the project replicated around the globe. “CUE’s UrbEnNet will create a world model for understating how cities and urbanization influence the environment where most of us live.”
news
Blake Eligh