For this U of T medicine alumnus, a chance to meet his Nobel laureate heroes 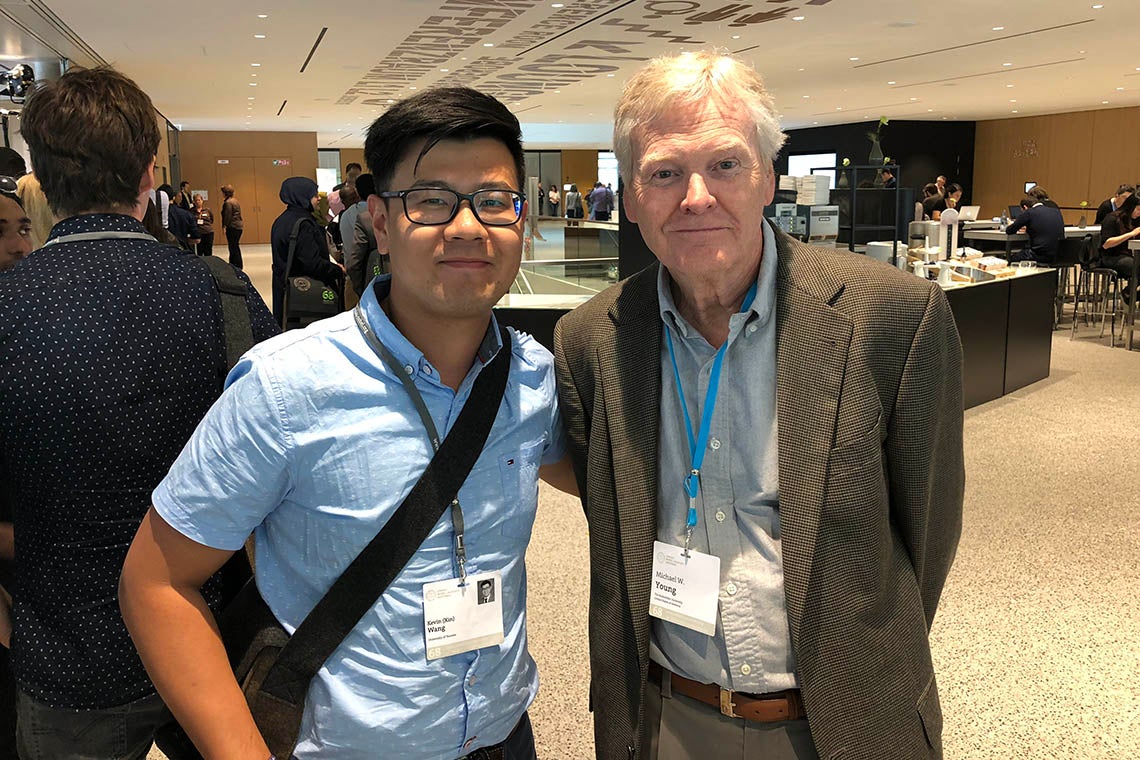 For Kevin Wang, the idea of meeting some of his scientific heroes (and Nobel laureates) had been a dream – until this summer.

The recent University of Toronto MD/PhD graduate was among the first five Canadian scientists to be nominated to attend the Lindau Nobel Laureate Meeting. The annual event brings together about 40 Nobel laureates and 600 undergraduate students, PhD candidates and post-doctoral researchers from 84 countries around the world. The idea is to foster dialogue and share knowledge and ideas across generations, cultures and disciplines.

Wang, who began his residency in internal medicine in Toronto this July, shared his experience with writer Erin Howe.

Is there anyone you were particularly excited to meet at Lindau?

This year, the 68th Lindau Nobel meeting took place on the beautiful islands of Lindau and Mainau in Germany, and featured laureates from the disciplines of medicine and physiology. As a cancer researcher and aspiring oncologist, I was particularly excited to meet Dr. Harold Varmus and Dr. Michael Bishop, who shared the Nobel Prize in 1989 for their discovery of the first human oncogene, c-Src, a type of gene that has the potential to transform a cell into a tumour cell. Their pioneering work ushered in a new era of cancer research, a field that I worked in and contributed to over the course of my MD/PhD training. I had the opportunity to meet and discuss with both laureates on the future of cancer research.

How exciting was the opportunity to meet and speak to Nobel laureates?

It was truly a once in a lifetime experience. A definite highlight for me was interacting with Nobel laureates, often in intimate settings. Through various formats, including lectures, panel discussions, master classes and science walks, the meeting encouraged idea sharing between the Nobel laureates and attendees.

What I found most rewarding were the small group discussions where generations of scientists gathered in a small circle to share lessons learned over illustrious careers in scientific discovery. More than just the eureka moments, I had a glimpse into the triumphs and failures that led to their Nobel Prize-winning work.

As one of hundreds of guests at Lindau, what was it like to meet others who make up the ‘next generation of leading scientists’?

It was definitely a humbling experience. I thank my PhD supervisor, Professor Michael Taylor, and my sponsoring organizations, the Canadian Student Health Research Forum, Canadian Institute of Health Research and the department of laboratory medicine and pathobiology, for this opportunity. What was most amazing about a meeting of this scale is that no matter what people’s language, gender, ethnicity or political affiliations were, everyone had a common goal – to advance scientific knowledge. Science allows us to search for the truth and understand who we are and our place in this world.

What do you see as the larger impact of these meetings?

I think meetings like this go beyond the exchange of scientific ideas and inspire young scientists to engage in our greater community. Many of the talks not only touch upon the scientific method, but also upon how science can be disseminated around the world. As scientists and medical doctors, we have a social responsibility to engage and educate the public. If more of us talk about issues like the benefits of vaccines or the harms of greenhouse gas emissions, perhaps more of the public will be able to get on board.

A personal bonus from attending this meeting is that I had the privilege of meeting many brilliant young scientists with whom I’ve become great friends.

The guiding idea for this year’s meeting was that scientific evidence is an answer to “fake news.” Having been at the meeting, how has your thinking about science communications changed?

It was interesting to see how this odd concept of fake news has spread from the U.S. and espoused a toxic environment globally. On the last day of the conference, there was a panel discussion on Strategies for Science Communication in a Post-Factual Era. One of the panelists, Nobel Laureate Steven Chu, the former U.S. Secretary of Energy, highlighted the importance of finding common ground when speaking with non-scientists.

We live in an age where opinions are easily confused as facts, especially through social media. The traditional view that knowledge comes from a few individuals in positions of authority is no longer relevant today. I believe this creates an exciting opportunity for scientists to educate and learn from the public by avoiding jargon and using a common language to communicate.

What was the best part of your experience at the Lindau Nobel Laureate Meeting?

I thoroughly enjoyed learning about other disciplines relevant to medicine. It was fascinating to learn about the work that led to cryo-electron microscopy and characterization of G-protein coupled receptors, a discovery that led to most of the drugs we prescribe today.

Perhaps the coolest moment was learning about how the structure and function of ribosomes was uncovered by Ada Yonath and colleagues, who won the Nobel Prize in Chemistry in 2009. Her work today focuses on leveraging structural information to design new antibiotics to target the bacterial ribosome. I remember first learning about ribosomes as the engine of life in middle school. To hear the person who discovered it talk about the decades of research that led to that discovery was truly inspiring!