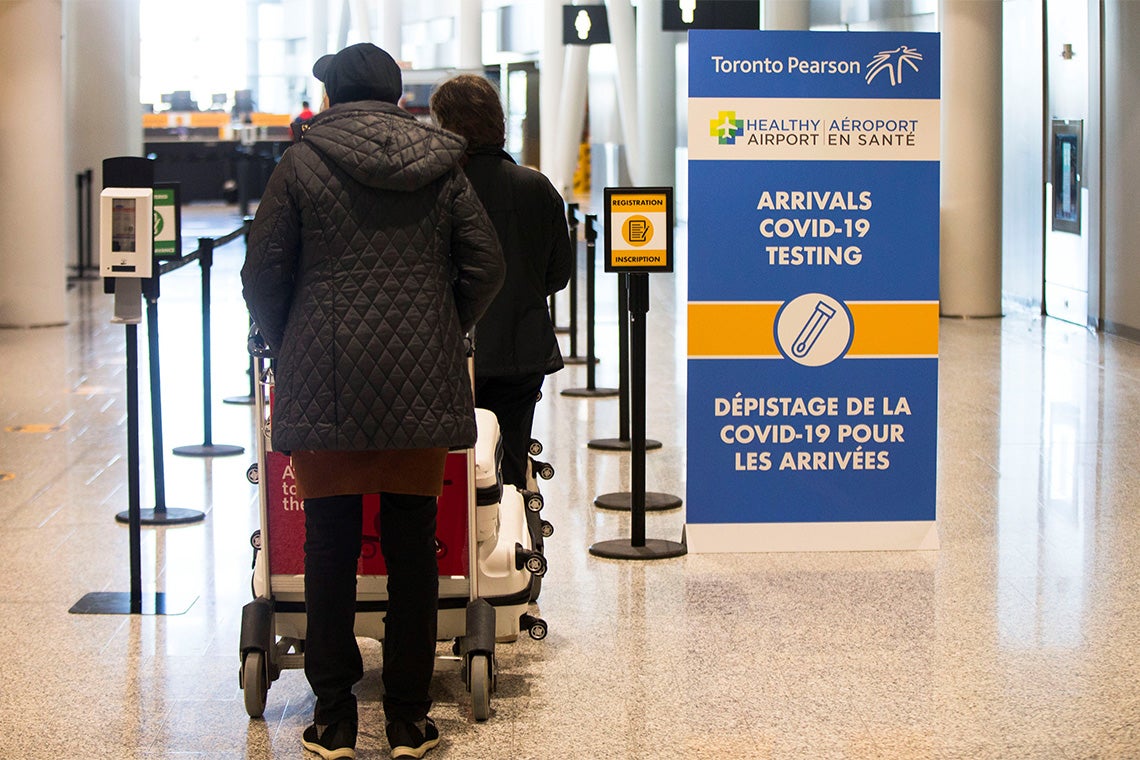 Testing international travellers on arrival with a follow-up test one week later detects 94 per cent of COVID-19 cases, according to researchers at the University of Toronto and McMaster University.

The results of the study, which looked at the feasibility of an airport-based COVID-19 surveillance program, were recently published to a pre-print server while they await peer review.

“The goal was to document how many travellers coming into [Canada] internationally were potentially carrying COVID-19 and how many would be picked up at different stages of quarantine: on arrival, day seven and day 14,” says Vivek Goel, the study’s first author and a professor at U of T’s Institute of Health Policy Management and Evaluation (IHPME) at the Dalla Lana School of Public Health.

Goel and colleagues from U of T, including Laura Rosella, an associate professor at Dalla Lana with a cross appointment at IHPME, and Cheryl Regehr, a professor in the Factor-Inwentash Faculty of Social Work, worked with researchers from McMaster to study how many international travellers flying into Toronto’s Pearson International Airport in September and October 2020 tested positive for the novel coronavirus. The participants, who were asymptomatic, did their own oral-nasal swabs, which were then sent to a lab for polymerase chain reaction testing for COVID-19 testing.

The study’s secondary objectives were to estimate degree of risk based on country of origin and to assess knowledge and attitudes towards COVID-19 control measures and subjective well-being during the quarantine period.

Of the 16,361 people enrolled in the study, 248 or 1.5 per cent tested positive for COVID-19. Of these, 67 per cent were identified on arrival, 27 per cent on day seven and six per cent on day 14. To be eligible for the study, participants had to be staying in the Greater Toronto Area, speak English or French and have Internet access.

In the face of COVID-19 variants of concern, many countries, including Canada, have closed their borders to foreign travellers, with the exception of essential workers and returning citizens. As of Feb. 22, a Canadian health order requires air travellers to quarantine for three days at an airport hotel –at their own expense – while awaiting results of their arrival COVID-19 test. Those with a negative result can finish the rest of their mandatory 14-day quarantine at home.

Goel notes that mathematical models – developed prior to the emergence of variants of concern – suggested quarantine and testing on day seven has the same rate of COVID-19 risk reduction as a 14-day quarantine that is perfectly followed.

“What our results show, which is consistent with the results from some of the mathematical models that have been done, is that with a reduced quarantine strategy and test at day seven, you pick up as many cases from the population as you do with a perfect 14-day quarantine,” Goel says.

A two-week quarantine is not only a significant barrier to travel, but also has economic, social and psychological consequences, adds Goel.  “We actually show the decline in general well-being during the time that people were in quarantine in their home,” he says.

A closer look at the demographics of the 248 passengers who tested positive reveals 75 per cent of them were between the ages of 18 and 49 years and slightly more than one-half of them were male. Moreover, nearly 75 per cent of the travellers who tested postive for COVID-19 were coming from areas designated high risk like the U.S., India and Mexico.

The positivity rates were also high for travellers from countries in Africa, a region with lower levels of testing. The findings speak to the need for border testing when travel restrictions are lifted, says Goel.

“It shows that as we get vaccines implemented in Canada, testing at the border is going to remain very important because we’re going to have disease continue to circulate in other parts of the world where they may not actually be picking it up.”

The research was supported by the Government of Canada in partnership with Air Canada and the Greater Toronto Airports Authority.