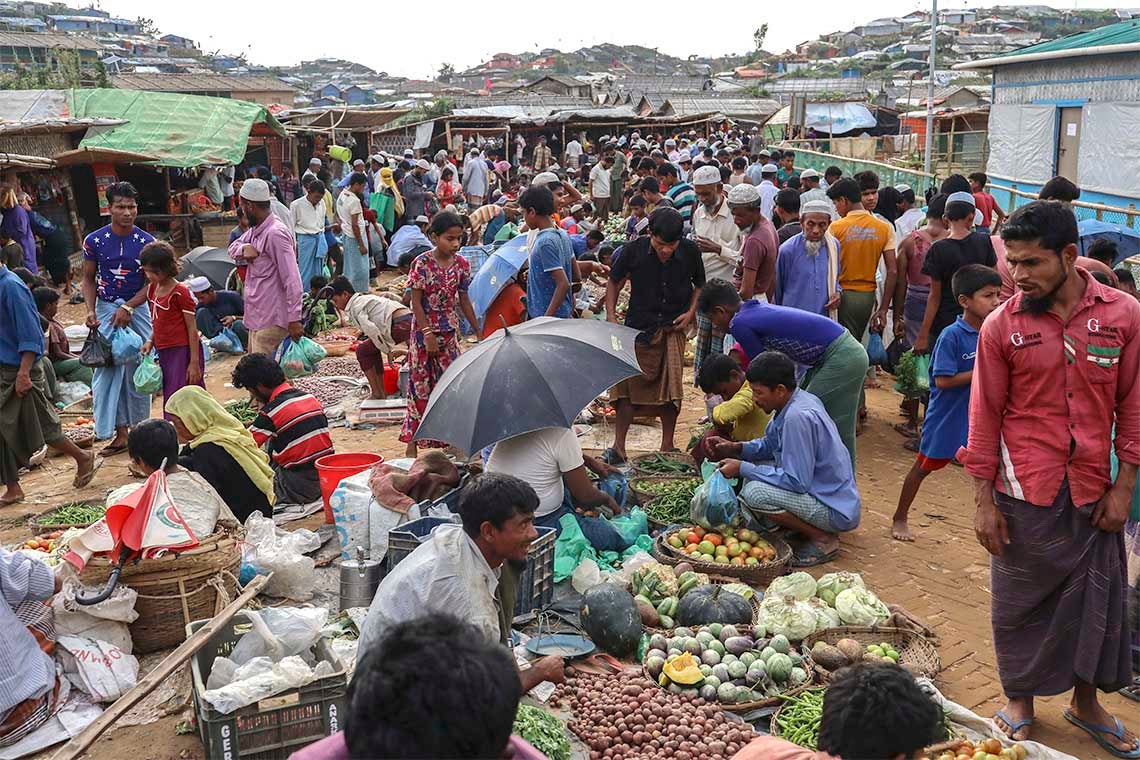 The market in the Balukhali camp in Cox's Bazar, Bangladesh on March 7, 2019 (photo by Kazi Salahuddin Razu/NurPhoto via Getty Images)

On the southeast tip of Bangladesh, around a fishing port called Cox's Bazar, 1.2 million Rohingya people live in a set of interconnected camps that make up the world’s largest refugee settlement.

Having fled neighbouring Myanmar after decades of violent oppression, the stateless Rohingya people are now described by the United Nations as “the most persecuted minority in the world.” In 2018, Canada recognized the crimes committed against the Rohingya as genocide, and a recent UN fact-finding mission determined that Myanmar is guilty of “a planned attack to cleanse the state of this population.”

In the midst of this crisis, two undergraduate students at the University of Toronto conducted unprecedented, on-the-ground research into how international aid efforts in the refugee settlement could be improved.

Sakshi Shetty and Kassandra Neranjan – who are both graduating this year – focused on what they call the “dehumanization, statelessness and gender-based security” of Rohingya women and girls, who are among the most vulnerable in Cox’s Bazar.

“We conducted primary research in person so we could witness the crisis response first-hand,” says Shetty, a University College student majoring in health and disease within the Faculty of Arts & Science’s Human Biology Program, as well as immunology.

“We not only got crucial insights on logistical, strategic, field-level issues and NGO collaboration efforts, but we also had the opportunity to network and make contacts for potential interviews. Being in Bangladesh gave us a holistic perspective of the issue — from the field level to the policy level.”

Neranjan, a Trinity College student double majoring in peace, conflict and justice studies and international relations with a minor in French literature, adds that the pair “found there to be a huge gap between program design and program implementation, especially in its gendered considerations.” 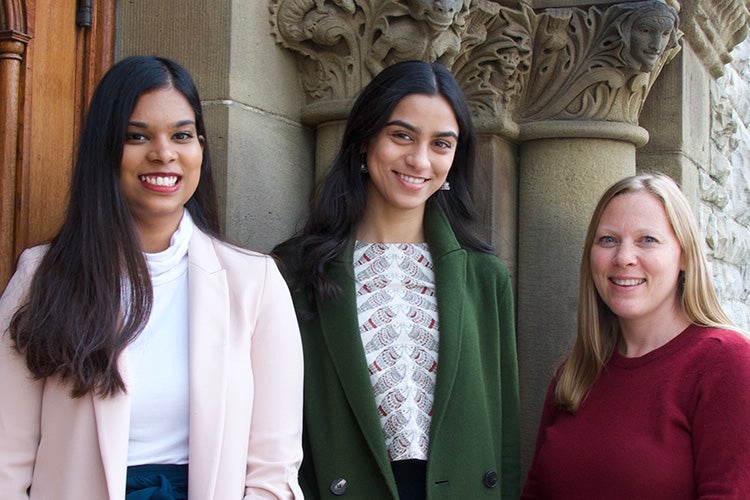 Shetty and Neranjan met as first-year students while volunteering in U of T UNICEF’s Youth Engagement Program. After discovering their mutual interests in gender justice, they embarked on research under the mentorship of Emily Hertzman — a post-doctoral fellow in the Asian Institute at the Munk School of Global Affairs & Public Policy — with the support of the Richard Charles Lee Insights Through Asia Challenge (ITAC), an interdisciplinary experiential learning program at the Asian Institute open to students from all disciplines across all three U of T campuses.

In Cox’s Bazar, Shetty and Neranjan worked with 11 aid organizations and conducted 18 interviews during a three-week period while also attending working group meetings with aid officials in the refugee camp. 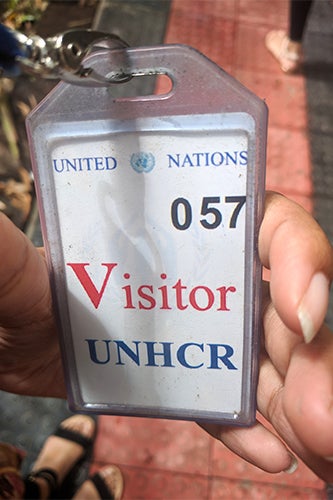 In the report, Shetty and Neranjan describe the challenges faced by Rohingya women and girls at the intersection of their ethnicity, religion, gender, statelessness and politics. They are denied access to education and work outside their homes while being disproportionately targeted with sexual, gender-based and domestic violence. Their insecurity is heightened by precarious conditions in the refugee camp. For example, climate threats in the region such as monsoons, mudslides, torrential rain and cyclones endanger women and girls if they are isolated without shelter during a weather event. Some girls are abducted, assaulted or trafficked when they simply leave their homes to collect firewood or water.

“It’s critical that more is done to ensure the world is not only aware of and understands this crisis, but actively supports this disenfranchised community,” says Shetty, pointing to the lack of extensive international media coverage of the crisis.

“Women have been extensively marginalized within these camps while also surviving severe trauma and violence in Myanmar,” adds Neranjan. “They comprise a majority of the population in the refugee camp. So there’s a real need to address ‘gender mainstreaming’”— the idea that gender should be factored into all programming and policy decisions in all areas and levels of an aid effort.

Hertzman says Neranjan and Shetty’s work not only makes a key contribution to their field of study, but has also given them valuable experience in law, health care, international development, health equity research and public health.

“They have been honing their observation skills, asking questions, listening, recording, probing and integrating into different social worlds,” says Hertzman, highlighting the advantages of experiential learning.

An expert in international migration in Asia, Hertzman is passionate about fostering research opportunities for undergraduate students. As part of ITAC’s commitment to supporting students through the complete trajectory of their research, Hertzman conducts workshops for undergrads on everything from project planning, proposal-writing, research ethics and fieldwork techniques to participant observations, field note-taking and experimental methods.

“Ours are some of the best undergraduate students, coming from all over the world,” says Hertzman.

“They bring varied life experiences that they can draw on in their research, and they’re energetic, motivated and brave. They ask interesting questions and are looking to make an impact in the world.”

Neranjan, for her part, developed an even greater passion for gender justice activism during her first year as a Munk One student and has spoken about feminist policy-making at the Toronto Women's March and the UN. Shetty, meanwhile, has worked with U of T’s International Health Program to address health and safety issues in Toronto’s marginalized and vulnerable populations.

Both students plan to continue their research and fieldwork following graduation.

“I just started working with BlueDot Global, a company that uses human and artificial intelligence to track, contextualize and anticipate infectious disease outbreaks,” says Shetty, who eventually plans to pursue a master’s degree in health policy or global health, in keeping with her passion for the social determinants of health in marginalized populations.

Neranjan will be pursuing a law degree in the fall – “to further my dream of addressing international human rights abuses through field research,” she says.