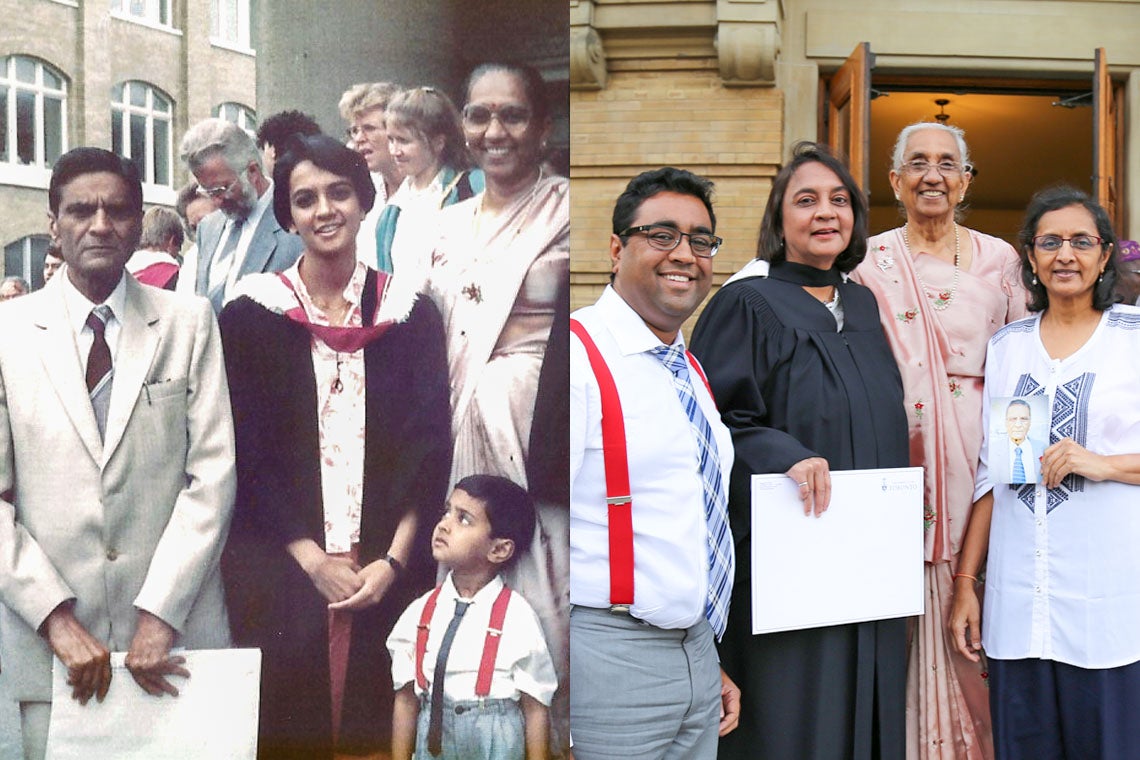 Then and now: Unnati Patel and her family (left) during convocation at U of T when she graduated in 1988; and (right) recreating her graduation photo in November after earning a degree in philosophy at U of T Mississauga (photos courtesy of Unnati Patel)

Four years ago, Unnati Patel stepped away from a decades-long engineering career and returned to her alma mater to rekindle her dream of studying humanities. She and her family celebrated that labour of love by recreating the photos from her first graduation at the University of Toronto 31 years ago.

Earlier this month, Patel graduated with a degree in philosophy from the U of T Mississauga. It is her second degree from U of T following a successful career as an engineer, much of it in leadership roles with multinational corporations in aerospace, high-technology and manufacturing.

After 25 years in her chosen field, Patel decided to check off an item on her bucket list. Using her retirement savings, she went back to university.

“I closed my eyes and jumped in with both feet,” she says of putting her career on hold at the age of 50, proving it’s never too late to follow your dreams.

That leap of faith proved to be deeply rewarding for Patel, who “fell in love with philosophy.”

The first time Patel donned a cap and gown at U of T was in 1988 when she received a bachelor's degree in applied science in electrical engineering. At the time, she was joined by her mother, father and then four-year-old nephew for some family photos. Her sister was the one behind the camera capturing the happy day.

Those original graduation photos still sit in the family rooms of her relatives. 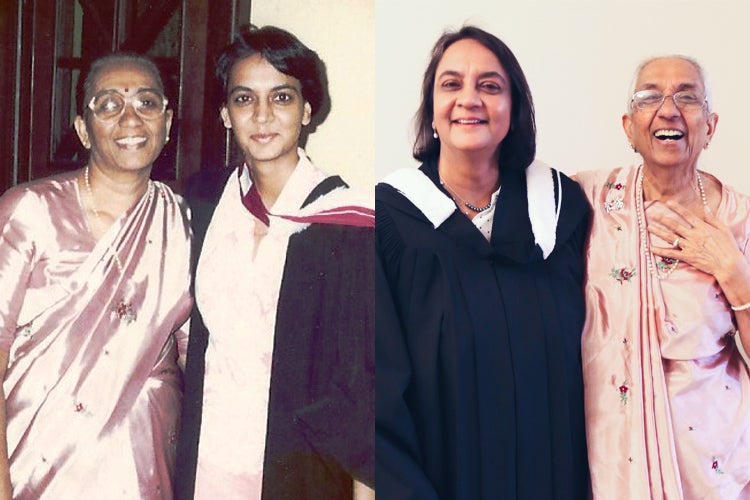 Unnati Patel with her mother, Indu, in 1988 (left) and in November (right): Her mother dressed in the same sari she wore to her daughter’s first graduation (photo courtesy of Unnati Patel)

It was time for an updated photo. Patel asked her family if they would help recreate a fondly remembered time from the past. They readily agreed.

The road toward recapturing that special memory, however, turned into an emotional journey.

Patel’s father, Kanti, was admitted to hospital with a brain injury while she was still working toward her degree. He died on March 9.

Within an hour of “letting him go,” Patel was sitting by her father’s bedside with family when she received a message that she was accepted into the graduate program at U of T.

“Everyone around the bed said, ‘Go for it,’” Patel recalls. But having planned to graduate in 2020 given all that had been happening in her personal life, she was two credits shy of finishing her undergraduate degree, which she would need to complete before starting graduate studies.

With support from family and U of T staff and faculty, Patel studied throughout the summer so she could complete the necessary course work by August, allowing her to start graduate school.

When November convocation came, she asked her family if they still wanted to recreate the photo they had planned. They assured her they did.

Patel’s mother, Indu, dressed in the same sari she wore to her daughter’s first graduation in 1988. Anup, her now-adult nephew, found a pair of red suspenders on Amazon and managed to duplicate the outfit he wore when he was a young boy. Patel’s sister, Prerana, handed the camera to another person and stood in for their father, holding his picture.

Coming together and recapturing that moment was “bittersweet” for Patel.

It was the first time her mother wore colour since saying goodbye to her husband of 65 years. Patel says her mother was “beaming” and it was nice to see her laughing that day.

“It turned out really well,” Patel says of duplicating her old graduation photo. “Needless to say, we're all older, wrinklier, greyer, bigger … but [we] celebrated this milestone nonetheless.”

Patel is now working toward her master's degree in philosophy at U of T.