U of T Global Innovation Policy Leader Dan Breznitz: Canada has ‘proven potential’ to innovate but struggles to turn it into economic might 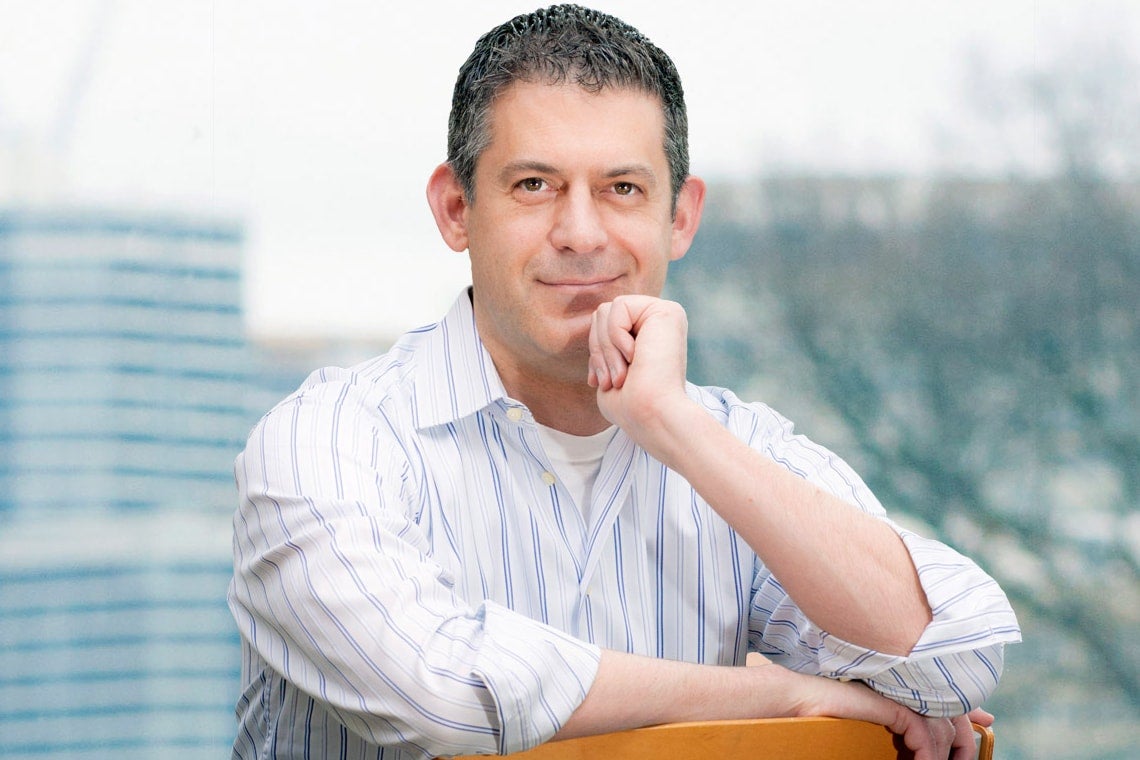 U of T Professor Dan Breznitz is one of the world’s leading authorities on innovation, advising policy-makers in Canada and around the world on how to turn inventions and ideas into economic growth.

As co-director of the Innovation Policy Lab at the Munk School of Global Affairs, Breznitz tracks how today’s economy rewards countries that carve out a unique role in the global supply of ideas, goods and services. From milling cotton to designing microchips, every country needs to find ways to succeed. Support from government policies and investment has become vital.

Canada is primed for success, Breznitz says, as long as we embrace the right innovation policies.

Breznitz’s crucial insight is that innovation can benefit not just inventors and investors, but everyone. Having analyzed success stories from Finland to Taiwan, Breznitz argues innovation can be a tool for inclusive and shared economic growth, creating new jobs and investments in Canada. With nimble and responsive government policies, Breznitz says, “we can devise innovation to shape the society we want to live in.”

Breznitz spoke with U of T News about his work in guiding global innovation policies and in training the future leaders in this increasingly important field.

What does your research involve?

I’m looking at the role of innovation because it is a critical engine – maybe the only engine – for continuous economic growth, as well as probably the most important engine for social change.

We need to understand: a) How to make innovation “happen” if you want to have successful societies and b) If you want to have a society we actually want to live in, we also need to figure out how to make it happen in a way that improves or at least does not destroy our society.

Can you tell us about the work your students do? I understand they’re directly involved in crafting innovation policy with you for countries such as Ireland, Israel and Mexico.

The reason why I joined the Munk School of Global Affairs is specifically to redesign the professional graduate education for global citizens. As part of it, we must understand innovation and innovation policy.

Every student that comes from Munk School needs to have basic fluency in innovation policy so they can read newspapers such as The Economist or The Globe and Mail, and not only understand what they read but also develop an articulated opinion as to why they agree or disagree with the conclusions.

For example, if Minister Bains [Canada’s minister of innovation, science and economic development] comes and says the government wants inclusive innovation and this can be achieved through immigration policy, [our students] will not only be able to tell you ‘yes’ or ‘no’ but they can also tell you ‘why.’

No matter their degree specialization, [Munk School graduates] will be part of big companies, consultancies, governments or international bodies, and [critical thinking and understanding policy] will be part of the job.

I run my Innovation, Institutions, Governments and Growth class working with real global clients on their core pressing projects. My students act as if they are a team of consultants or a think tank that was asked to help with a national project. . . They can not only write on their CVs [that they’ve learned about it], they’ve actually done it.

In the case of Mexico, there is now a big, important, new organization — the first one to do with social innovation in a Mexican state [Jalisco] – which was devised and built based on the recommendations of our students from two and a half years ago. Not many master's students can say they’ve actually done that by the age of 24.

When students have finished my courses and are up for a mission, either to evaluate or suggest policies, and you give me a call and say, ‘Can they do it?’ I can truly answer, ‘Sure they can do it, and by the way, here’s a briefing they already wrote on a country they knew nothing about when they started.’

Everyone is talking about innovation now – it’s a hot topic – including here in Canada. How are we doing in Canada in terms of our policies related to innovation?

So, it’s not really surprising we are failing. We are horrible and for the last 13-15 years we have become worse and worse in terms of innovation and economic growth based on innovation.

What is disturbing about this is that at the same time, we actually became better and better in terms of proven potential to innovate and invent. We are punching way above our weight in scientific research, especially useful scientific research leading to new drugs and new technology that foreign companies and foreign economies are making a lot of money on. You’ll find a lot [of that research] was Canadian.

For example, the first Internet search engine came out of research at McGill, the first multi-touch screens – University of Toronto, [same with] the Ebola vaccine, artificial intelligence. I am very willing to bet, which makes me very sad, that almost all the important things in quantum computing that will make a new generation of billionaires will be invented and developed in Canada, only to become innovation in a different country that then rip most of the economic benefits.  We should all be disturbed about this as Canadians.

If we were South Sudan, and we were failing in innovation, fine! [makes a raspberry sound] But we are Canada! Canada and France are the worst performers in the world when it comes to [innovation] potential versus actuality.

When you have a student and they don’t know how to read and write and they fail in class, it’s not a surprise.

If you have a student that by Grade 1 can recite Shakespeare by heart and actually understand what it means and they completely fail in literature, you have a problem and the problem is not the student. The problem is government policy – federal and provincial.

This government at least claims to understand this [the federal Liberal government and the Ontario government].

I will say on the provincial level [in Canada], there have been some nice spots [for innovation policy], and I can actually point you to great successes.

Canola, which is actually a combination of two words: Canadian Oil [invented in the 1950s by Canadian scientists Baldur Stefansson and Keith Downey] and the oil sands.

If you actually look at why we were suddenly able to produce oil and had that boom, it was a government-private sector partnership, and it was classic innovation policy through the Alberta Oil Sands Technology and Research Authority. The only reason companies were willing to invest a lot in figuring this out was that with government help technological risks became manageable. Without that, there would be no oil sands.

Those were real innovation policies.

When you look at the figures  for Canada measuring any innovation output we can think about, from business investment in research and development, to patents, to global new product launches, versus innovation inputs, such as excellent and commercially, socially, and medically crucial scientific research, you can see innovation has gone down but invention has gone up.

This past year, the Government of Canada has been involved in public meetings on its Innovation Agenda and is set to release an action plan arising from those meetings in the near future. Have you consulted with them on this innovation policy?

I’ve been in communication with various people who are working on developing and writing the policy in Minister Bains’ office, which I found very constructive.

The real question is what will come out of all of this consultation and policy creation? What will actually be implemented rather than just announced?

To succeed, this policy must be cemented or institutionalized in place so that it remains when Bains and Trudeau are no longer the minister and prime minister. Otherwise, two years or four years from now . . . we’ll be back at square one.

Innovation policies, even successful ones, take a long time to really change the landscape.

So at the end of this consultation, if we have ad hoc solutions without the budget and political will [to back them up] I think we will more or less wind up in the same position.

So who is doing innovation well?

The usual suspects: Israel, Finland, Taiwan, Denmark, China, Germany but each of them does it in a very different way.

The fruits of success are enjoyed more or less equally. So it’s not a surprise when you look at innovation policies that Israel and the U.S. have become two of the most unequal societies on Earth while Finland, Germany and Taiwan either stayed very egalitarian or became more egalitarian.

Why are the U.S and Israel less equal while Finland has become more egalitarian? Is a clue to be found in their innovation policies?

The U.S. has always been a rather unequal society, and we all know that it has become more unequal. What is surprising is when you look at Israel.

At the time they started to have innovation policies, Israel moved from being the second-most egalitarian society in the OECD or developed Western economies to the second-most unequal.

According to the OECD, one out of every five families in Israel is living under the poverty line, and yet the country has more millionaires than at any time in its history.

The effect of their innovation policies is extremely concentrated. A very thin slice of the Israeli economy and population is enjoying the economic wealth that is on par with Silicon Valley, and the rest of the economy is stagnant and stuck in the Israel of the 1970s and ‘80s.

A dual economy has been created.

If you look at Finland, they have become innovative in information and communications technology, too, (think global giant Nokia) but that innovativeness has also been infused in every part of their economy, like the pulp and paper industry and heavy machinery. That approach means that workers at all skill levels in Finland have enjoyed the fruits of their country’s innovation success.

Finland also has regulations in place to prevent huge wage disparities unlike Israel and the U.S. For example, if you look at Nokia even at its prime, within Finland even top managers or directors were not making a 150 or a thousand times more than the least paid employee.

These disparities are troubling for a number of reasons. Do you want to live in a society where every fifth household doesn’t have enough food to give its kids?

At least as important is the fact that a lot of economic success of specific companies and individuals comes because of policies of the state from innovation policies to education policies to infrastructure policies. Accordingly, everybody who pays taxes should have the same chances of equity: wealth and opportunities shouldn’t go only to those who have been lucky enough to be born with a mathematical bent to an upper middle class family and [can] acquire education at top universities such as MIT or Stanford. I think this is what we believe in Canada.

Dan Breznitz is Munk Chair of Innovation Studies at the Munk School of Global Affairs and a political economist in the Faculty of Arts & Science. His innovation expertise is just one example of extraordinary impact at U of T. Learn more at utoronto.ca