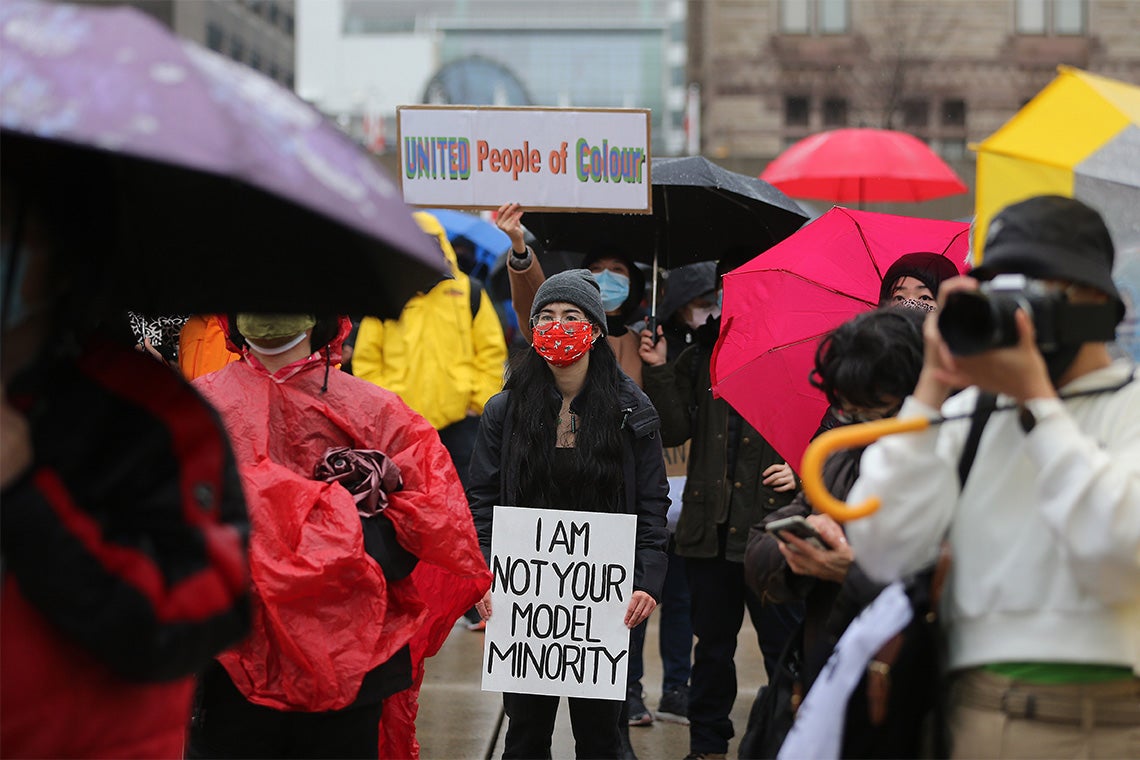 Just before the onset of the pandemic, recent University of Toronto graduate Kennes Lin helped launch a website with the Chinese Canadian National Council Toronto Chapter (CCNTO) for reporting incidents of anti-Asian racism.

The graduate of the master of social work program hadn't expected to see such a rapid upsurge in hate speech and violence. In 2021, the site logged 943 reports – a 47 per cent increase over the year before. Now, to better understand this disconcerting trend, Lin is collaborating on two U of T social work research initiatives that focus on Chinese Canadians.

The projects’ lead researchers – Lin Fang and Izumi Sakamoto, both associate professors at the Factor-Inwentash Faculty of Social Work – have partnered with community organizations to reach a cross-section of Canada’s Chinese population. Though they’re taking different approaches, Fang and Sakamoto are both aiming to explore Chinese people’s past and present experiences of anti-Asian racism, heighten awareness inside and outside Chinese communities, and develop strategies to address the crisis.

“Social work research on contemporary anti-Asian racism and the unique ways it manifests has been scarce, reflecting its low profile in broader society,” Fang says. “This racism has always existed in Canada and elsewhere, but it’s not been at the forefront of most people’s consciousness. COVID-19 was a catalyst, unfortunately, making it more visible and present.”

Fang’s multi-phase research began in late 2020, when she asked Chinese youth to submit photos and visual art representing their thoughts on anti-Asian racism. Called ‘My Script, My Voice,’ the project is co-led by the Hong Fook Mental Health Association and its youth advisory committee, along with the Asian Canadian Living Archive.

“The images and written reflections that accompanied them revealed how young people were thinking and feeling about anti-Asian racism early in the pandemic, and what they were doing to take care of themselves,” says Fang. 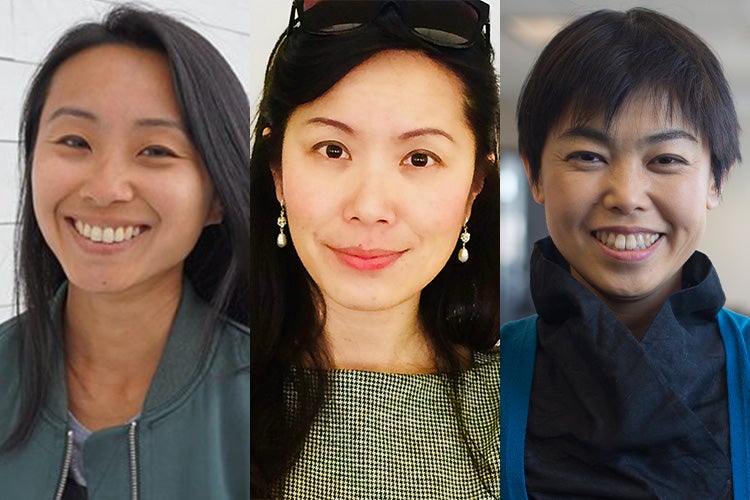 To dig deeper, Fang and her collaborators later held focus groups and conducted individual interviews with nearly 40 participants aged 12 to 25. Beyond COVID-19, the youth pointed to the legacy of white supremacy in Canadian society and ignorance as some of the key factors driving the increase in racism against Asians.

The respondents’ personal or witnessed experiences included overt acts, including being pushed or spat on and receiving hateful social media posts, but also offhand comments on their eyes, “natural” math aptitude or poor athleticism. “As they unpacked their memories, many said they felt their experiences were dismissed by others at the time. They also said they felt confused about whether the subtler incidents were really racism,” she says. “This uncertainty isn’t surprising, since racism directed specifically at Asians hasn’t traditionally been covered in schools or the media.”

It’s also rarely mentioned at home. A frequent theme in the focus groups was the relative lack of openness around anti-Asian racism in Asian families. “Parents are often uncomfortable speaking about it because they don’t feel equipped, or they may subscribe to cultural beliefs about keeping your head down and not making trouble,” says Fang, the Factor-Inwentash chair in children’s mental health. “If they’re immigrants, they also could be afraid to rock the boat.” Focus groups with Chinese parents are currently underway to gain more insight into these barriers.

The youth participants said that anti-Asian racism made them feel like outsiders or “foreigners,” triggered fear of being in public spaces and had a negative impact on their mental health. Still, Fang says the process of coming together and finding common ground sparked strength and hope. “They want to talk about it more, and some of them have even been inspired to activism.”

In the next phase of the project, Fang and her co-researchers in the faculty – Assistant Professor Stephanie Begun, Associate Professor Eunjung Lee and Sakamoto – will publicly share what they’ve learned from youth and parents. In co-operation with Lin, who is lead of youth and family services at Hong Fook and an anti-Asian racism advisor at the Chinese Canadian National Council Toronto Chapter (CCNCTO), they hope to engage Chinese communities in ongoing discussion and education through social media campaigns, peer-to-peer groups, school workshops and parent support groups. 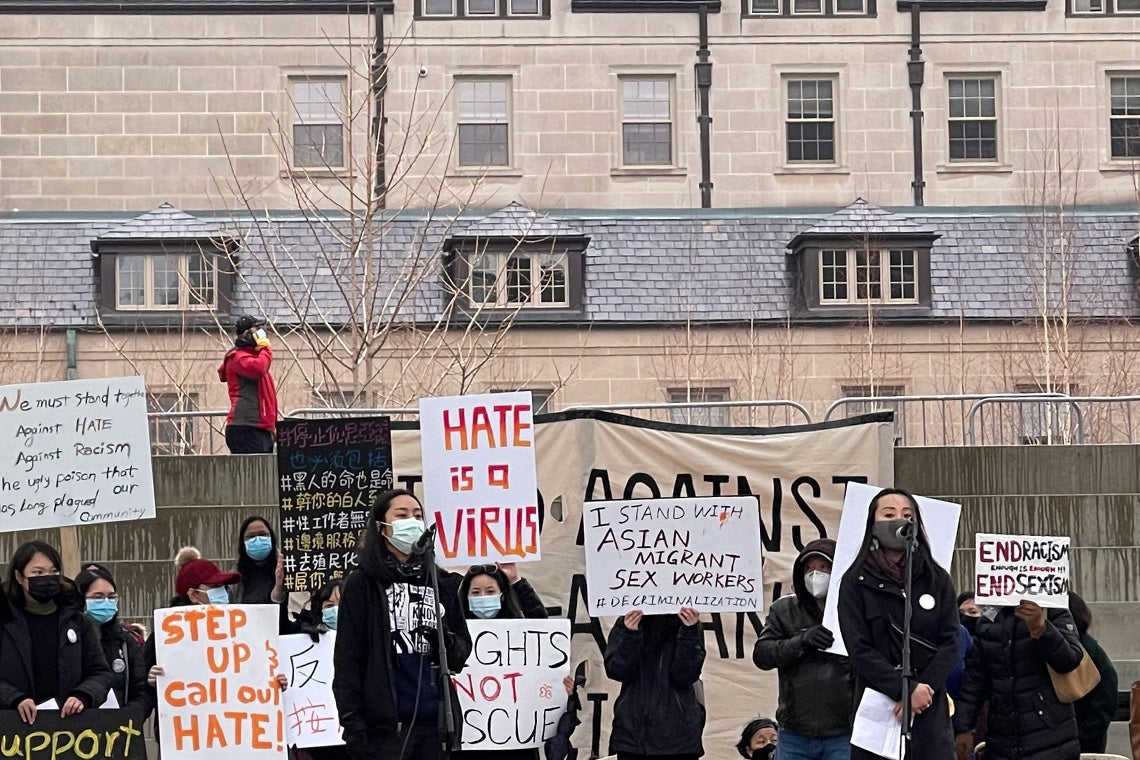 In Sakamoto’s separate pilot study, “2020 in Hindsight: A Virtual Chinese Canadian Dialogue on Race,” Lin has been a key member of the research team from the start. The project is examining how Chinese Canadians from different generations and socioeconomic positions experience anti-Asian racism in the context of increased awareness of racism and white supremacy in the larger society. To do this, the researchers brought together five speakers (several of whom had reported a racist incident on the website Lin helped create) to tell their stories to 30 community participants on Zoom. The second part of the event involved small group discussions facilitated by volunteers, including several social work students who were fluent in Mandarin and/or Cantonese.

“We wanted to include people whose voices aren’t often heard, such as teenagers, seniors, frontline workers in low-income jobs and people with precarious immigration status,” says Sakamoto, who notes that she is Japanese and works from the perspective of an ally. She has collaborated with CCNCTO for the past 20 years as a researcher and advocate focused on issues facing Asian Canadians.

“It has been a privilege to work with Dr. Sakamoto and to be part of this research project, which has allowed me to apply my previous experience in community organizing as well as my experience as a member of the community,” says Hogan Lam, a master of social work student who was involved in the pilot study. “This project has taught me so much. It’s allowed me to rethink my intersectional identities in Canadian society and my relationship with anti-Asian racism as well as white supremacy.”

Similar to the youth in Fang’s project, many of the participants in Sakamoto’s pilot study said they felt unsure about how to process their experiences. “They spoke about not feeling safe at school or in their workplaces, but not being able to articulate exactly how or what,” says Sakamoto. “While some articulated their experience of anti-Asian racism, others expressed a sense of self-doubt and unsureness when experiencing something like a shove on a crowded subway platform, and they wondered whether it was racism. We can attribute this to the insidious nature of racism, but also to the lack of language and resources around anti-Asian racism. Many people aren’t sure how to talk about it.”

While Sakamoto was familiar with the alarmingly high numbers of incidents reported online, she says seeing the faces behind the data prompted a “visceral reaction.” She didn’t expect to hear that high school students are still physically assaulted for being Asian, or that Asian frontline workers still face relentless verbal abuse and violence in Toronto. But the painful narratives forged connections and a sense of community among the participants, says Sakamoto, offering hope that the research team can build on this virtual format. Future possibilities include a town hall and forums with other Asian communities, as well as further research building on Asian identities and activism.

“While I wish the COVID-related racism targeting Asians never happened, the critical mass of incidents and awareness has given the issue a new sense of urgency,” she says. “Ten years ago, possibilities for these conversations among community members and researchers across different walks of life or generations were still limited. Putting experiences into words is a powerful thing.”
Fang and Lin agree that the growing desire in Asian communities to talk about, learn about and do something about anti-Asian racism is cause for optimism. “There’s a word in Chinese that essentially means ‘crisis,’ but within it is the word ‘opportunity,’” says Lin. “I’ve thought a lot about that word over the past two years.”