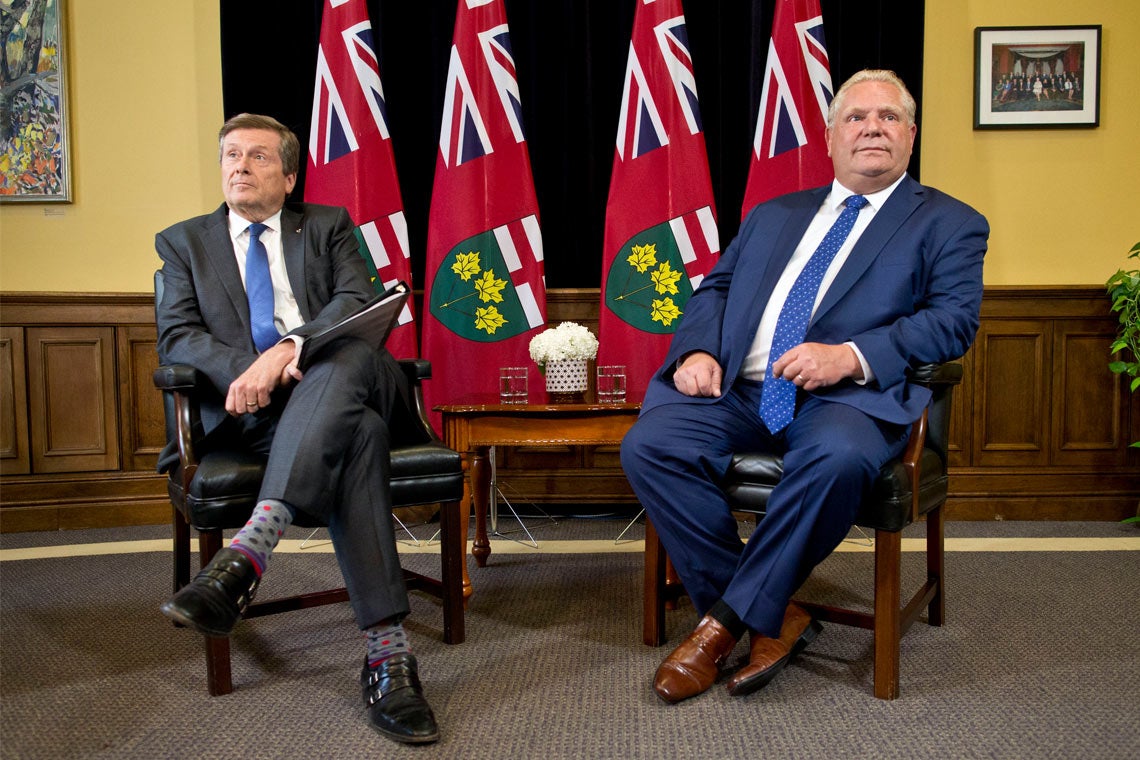 Ontario Premier Doug Ford announced Friday plans to cut the number of Toronto city councillors from 47 to 25 – a move he says will make the municipal decision-making process smoother and cut costs.

“We need to get the city moving,” said Ford, estimating that shrinking city council will save the city $25 million.

"I think Toronto taxpayers will be happy to trade a bunch of politicians at city hall for millions of dollars that can be reinvested in the city’s pressing priorities," he said.

The Toronto municipal election is set to take place on Oct. 22. The deadline for candidates to register was supposed to be Friday, but Ford said he will extend it until September.

Mayor John Tory reacted to the council shakeup in a news conference on Friday morning.

“What we don’t need is change being rammed down our throats without a single second of public consultation and on top of that done in the middle of election period,” he said, accusing Ford of changing the rules "in the middle of the game."

U of T News spoke with Gabriel Eidelman, an assistant professor at the Munk School of Global Affairs & Public Policy and director of the Urban Policy Lab, and Nelson Wiseman, professor of political science and former director of the Canadian studies program at the Faculty of Arts & Science, about the municipal and provincial implications of Ford’s decision.

Did you find this announcement surprising?

Eidelman: The timing surprised me but not the actual decision.

I thought the timing would have been too tight – and arguably still is.

If I'm a city staffer – meaning a city clerk working on the elections in part of that office preparing for the elections – wow, this is going to be difficult to pull off because they've had planning in place for months and now everything is thrown for a loop. We don't even know what the ward boundaries are, we don't know how they've been chosen, and we don't know what that means in terms of the different races and how it all comes together.

Wiseman: Not particularly. When Mike Harris was in government [as premier of Ontario], he reduced the size of the provincial legislature.

I suspect [Ford's] proposal will be quite popular especially with people outside of Toronto.

But Doug Ford is a Conservative. His father was part of the Mike Harris government. It included cabinet ministers like Tony Clement, John Baird and Jim Flaherty. When the Harper government came into power, all three of these Harris ministers were in the federal cabinet. They introduced a bill and they increased the number of politicians in the federal parliament from 308 to 338. So I would ask Doug Ford: How is this consistent with the federal Conservatives under Stephen Harper, who was your friend and came to your rallies and your barbecues. How is it consistent with the position he took?

What are the implications of these proposed changes?

Eidelman: From an academic, research perspective, we don't know if the number 25 as the number of councillors versus 47 is good or bad for democracy because we don't know what we're judging that against – we don't have evaluation criteria to say it's good or bad. In fact, there's a general dearth of that kind of research and literature.

That happens a lot but there's very little sound, credible research that lays out what we define as our notions of good versus bad governance and measuring actual outcomes based on some of those structural changes.

Wiseman: I'm not sure they'll go ahead that quickly. It takes time to pass legislation. The problem he has is there's going to be a lot of blowback. We're already getting it from the mayor of Toronto – and from a lot of small "c" conservatives who are planning to run in the municipal election.

Even if they were to pass it before the next municipal election, they would see it only come into force in the subsequent election. But, hey, I could be wrong.

What will this mean for those people who have already announced their candidacy for city council and will these ward changes pit incumbent councillors against each other?

Eidelman: We don't really know what the effects are on democracy. It depends on your definition of democracy and what you're measuring – what you're counting – and what you expect a high-functioning democracy to be in local politics.

On a practical level in terms of what this does for people who are challenging incumbents, but also incumbents themselves, this is, in some sense, chaos for them. It’s fair to say that the likelihood of challengers pushing out incumbents, which is already a very low likelihood, is even more difficult. It's much less likely we'll end up with a council with new faces.

When you have situations where incumbents are facing other incumbents, you're doubling the chances an incumbent will win that seat.

Doug Ford said the city will save $25 million by cutting the number of councillors, though by some estimates, that number would be a lot lower. With a city budget of billions – does this amount to a lot of savings?

Eidelman: I was trying to do a mental calculation off the top of my head during the announcement – I came up with about half. But that's making assumptions that he's doing simple arithmetic of taking 22 fewer councillors with their office budgets are in the neighbourhood of $200,000. Do the math there and you're still much lower than $25 million.

Those numbers, regardless, on a city budget that's above $12 billion annually, are trivial. That kind of penny-pinching that was common during the Ford days at city council  is not going to make a big dent in the city budget. No matter what number you come up with, it's going to be a small number per resident and those residents are not even going to pay that directly – it's not like there's a line on your property tax that goes toward staffing councillors.

How much power does the Ontario government have over municipal politics?

Eidelman: It's a bit of a grey area in terms of the ward boundaries because the City of Toronto Act does give council authority to draw its own boundaries but at the end of the day, constitutionally, the province has the powers to do so because its governing legislation creates the municipality itself and all of the bylaws that are passed by city council are really just delegated authority by the province by legislation.

Wiseman: The province can do anything it wants to municipal government as it has done in the past when it amalgamated the various boroughs with the City of Toronto to create the new city of Toronto and as it did when it increased the size of council in the past.

The provincial government can even do away with the city of Toronto. The people would still be there but they could decide, "Oh, we're amalgamating Toronto and Hamilton" or "We're changing its name to York."

Historically, is it unusual for an Ontario premier to make these kinds of decisions that will affect municipal politics?

Eidelman: The timing, yes, I think would be very rare. But just 20 years ago, under the [Mike] Harris government, the city of Toronto was amalgamated without much support from the City of Toronto and local councillors. There were protests that were staged. That was a much more drawn-out process – it wasn't in the middle of an election campaign and it certainly wasn't to influence who would be running in that election in less than three months' time.

This announcement also included the cancellations of elections for four regional chairs in Ontario including Peel where former Progressive Conservative party leader and Ford adversary, Patrick Brown, was running. Do you think this decision has ulterior motives?

Eidelman: I honestly don't know. It's hard not to read into that. It is curious – the language that was used in the press conference in explaining why only certain regional municipalities would have their elections taken away – is that the other municipal governments are more "mature,” which is an odd thing to say.