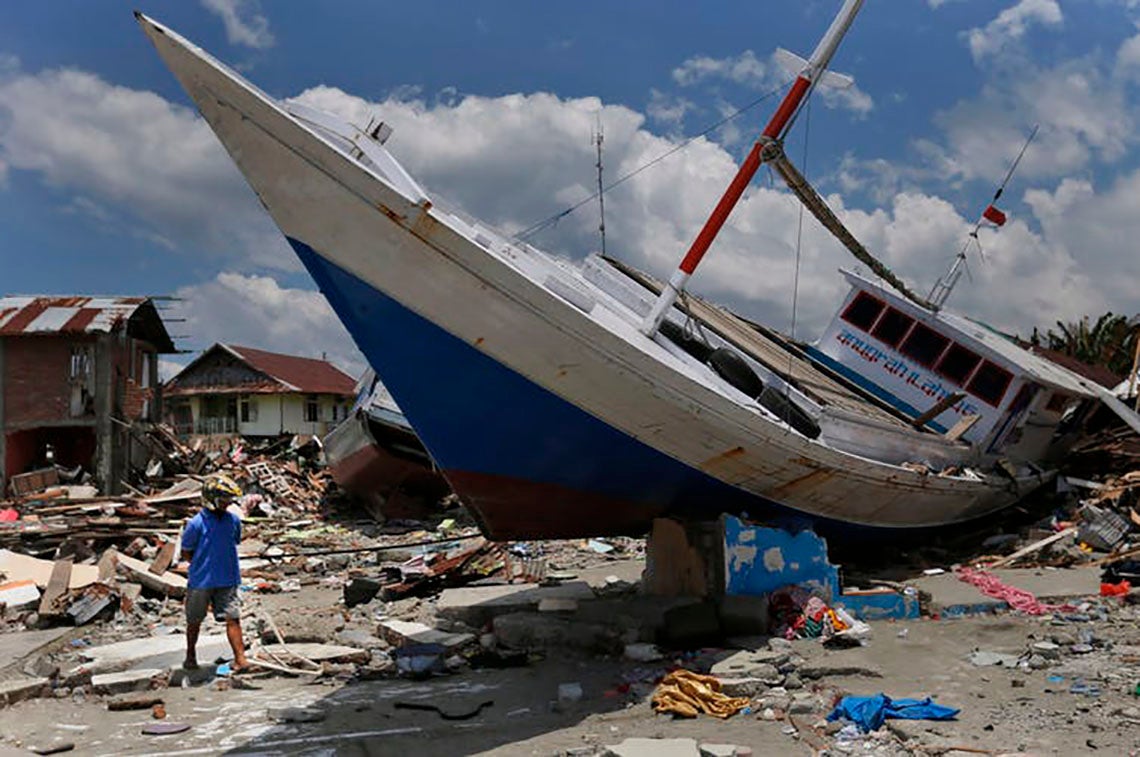 In this Oct. 10 photo, a man walks past a boat swept ashore by a tsunami in Wani village on the outskirt of Palu, Central Sulawesi, Indonesia. The 7.5 magnitude earthquake on Sept. 28 triggered a tsunami and mudslides (photo by Dita Alangkara/Associated

You feel a jolt. Was that … no, it couldn’t be. Wait, it is an earthquake.

Now the whole house is shaking. What do you do?

The answer depends less on the magnitude of the earthquake than you’d think. What matters more is what country you live in and how close you are to water.

Take, for example, the biggest earthquake you’ve never heard of. It happened on Feb. 27, 2010, off the coast of Chile. It was the sixth largest ever recorded, with a magnitude of 8.8.

It didn’t exactly go unnoticed. It caused three minutes of intense shaking in Chile and Argentina. The tsunami it generated caused damage as far away as Japan.

Yet relatively few people, 550, died in this earthquake, 150 of those in the resulting tsunami, and it hasn’t lingered in the public awareness.

Compare it to what happened in Haiti just a month earlier, on Jan. 12, 2010. That one you definitely remember because it was awful, and you and countless others donated to the rescue and recovery effort.

No one knows for sure how many died: 160,000? 220,000? But this earthquake was only a magnitude 7.0. In the world of logarithmic scaling, that means the one in Chile was 500 times more powerful. So why was the Haiti earthquake so devastating?

The classic saying among geologists is that earthquakes don’t kill people – buildings do. Or bridges. Or failing dams. Or fires from ruptured gas lines.

Or a cholera outbreak that follows from the lack of clean drinking water.

Nothing makes a bigger difference in an earthquake’s death toll than infrastructure, especially when population is dense. Chile has a long history of earthquakes. The largest ever recorded, a magnitude 9.5, struck in 1960. It also has the building codes to show for it. Haiti didn’t have the resources to adequately prepare or respond.

Another difference is expectation. The earthquake in Haiti happened on what is called a blind fault, meaning it was buried, so we didn’t know it existed.

The fault in Chile pops all the time. And countries throughout the Pacific now know they can be hit anytime by a tsunami originating from Chile or any other number of locations.

After the devastating earthquake that struck off the coast of Sumatra on Dec. 26, 2004, generating the Boxing Day tsunami that killed more than 200,000 people, an international effort ramped up deployment of a warning system of buoys in the Indian Ocean.

The unexpected in Sulawesi

So what went so wrong on Sept. 28 in Sulawesi, Indonesia? The magnitude 7.5 quake was large, but not giant. The real killer, and the surprise, was the tsunami. So far, about 2,100 deaths have been reported, but the number continues to rise.

Tsunamis are devastating – inescapable and nearly unsurvivable if you’re in their path. They usually occur by changing the shape of the ocean floor during the earthquake.

Would an early warning system have helped? Possibly, but because we weren’t expecting this kind of tsunami, even if a network of buoys had been functional, they wouldn’t have been in the right place because the tsunami was so local.

They also wouldn’t have given locals much warning, as the tsunami followed so quickly on the heels of the earthquake – in this situation the earthquake itself was the best early warning system.

What should you do?

Don’t think we’re immune to large or unexpected earthquakes in Canada. Vancouver is poised for “the big one.” There are occasional rumblings in Quebec and Ontario along ancient tectonic scars –earthquakes along faults like this are the hardest to predict because they occur so rarely.

Learning to accurately predict and prepare for earthquakes is a long game. They’re so seldom that it’s difficult to see the pattern, and therefore difficult to predict the future.

There is promising work on “precursor” earthquakes that give days to minutes of warning. Unfortunately, most of the time the best we can do is make pronouncements about the chance of an earthquake of a certain size occurring in a certain area in the next certain number of years. And that sounds anything but certain.

Scientists are working on extending what we know about past earthquakes beyond recorded human history. This helps. But accurately predicting earthquakes and their impact requires money, time and lots of excruciatingly detailed work.

So what do you do when you feel the jolt of an earthquake? In Chile, dive for cover; your building will probably stay standing. In Haiti, get out in the open. If you’re anywhere near water, like Sulawesi, don’t wait for warning sirens, head for the hills as fast as you can.

Lindsay Schoenbohm is an associate professor of Earth science at the University of Toronto Mississauga.