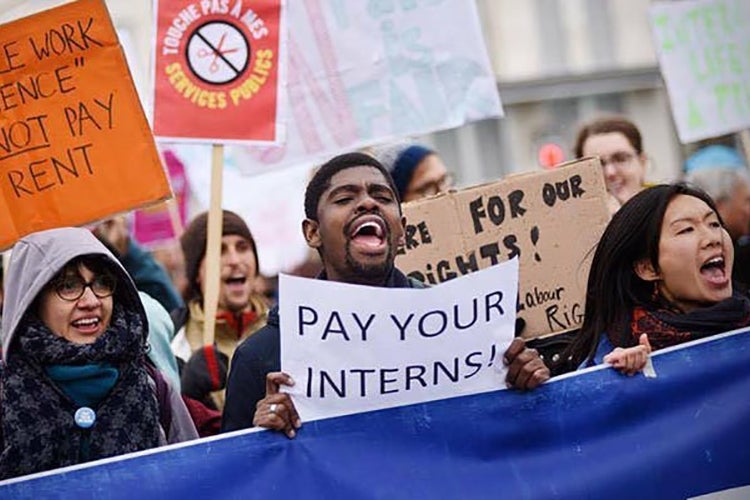 Unpaid interns protest in Geneva in 2016. Activism has played a big part in how unpaid internships are now being regarded with disdain (photo by Global Intern Coalition)

It’s job search season for students and fresh graduates, which means a bump in media interest in internships.

Barely a decade ago, we’d expect news articles to include tips for landing a “dream internship” or to quote an employer boasting that unpaid interns are economically efficient for firms. But today, the media coverage generally takes a different tone.

For example, the U.K.‘s The Guardian recently called out British Vogue for recruiting unpaid interns.

The article’s main source is an intern advocate who reported the fashion magazine to Britain’s HM Revenue and Customs for potentially violating minimum wage laws.

It notes that a Vogue “workplace shadowing” role undermines the editor’s stated commitment to expand diversity at the magazine since unpaid internships generally exclude people who can’t afford to work for free and generally favour the children of the wealthy.

In Canada on International Women’s Day, CBC News reported on the need for improved protections against sexual harassment of unpaid interns.

What’s behind the pivot in public opinion that has seen internships shift from a benign rite of passage to a lightning rod workers’ rights issue? Activism.

Since 2010, an intern rights movement has been remarkably successful at winning victories for interns, drawing attention to just one vital issue of workers’ rights.

Activism has made a difference

As part of our research on collective responses to precarious work in cultural and creative industries, we have been tracking how young workers, interns past and present and their allies are confronting unpaid internships and the cultural conditions that condone them. They’re doing so via protests, online campaigns and government lobbying.

Grassroots intern labour groups are led by young people motivated by their own experiences and those of their peers, who are underemployed, engaged in long stretches of unpaid work or simply unable to afford to work for no pay.

Groups such as Intern Aware and Precarious Workers Brigade in the U.K., Intern Labor Rights in the United States, Interns Australia and the Canadian Intern Association (on whose advisory board two of us sit) have formed to protest the pressure to work for no wages to gain “experience.”

These groups have produced research and educational texts (such as Surviving Internships: A Counter Guide to Free Labour in the Arts) and staged demonstrations that grab headlines.

Under the banner of the Global Intern Coalition, intern organizations have orchestrated an annual Global Intern Strike, a day each February where interns worldwide protest unpaid work in fields such as international development, arts and culture and in various academic programs.

This past February, thousands of students protested in Quebec – their slogan, “exploitation is not a vocation” – while United Nations interns emphasized the high cost of interning at the UN, which can block people from diverse economic and cultural backgrounds from vital work experience.

According to the Fair Internship Initiative, 64 per cent of UN interns come from high-income countries.

Collectively, intern advocates have shaken up consensus on unpaid internships.

As part of our aforementioned research, we analyzed hundreds of news media articles between 2008 and 2015 and traced a shift in tone in how unpaid internships are covered, who is quoted as sources and what narrative devices journalists use to help tell stories about unpaid internships.

Early articles typically endorsed internships. They positioned unpaid internships as essential for standing out in a hyper-competitive labour market and relied on employers and career counsellors as go-to sources.

During the 2008-2009 recession, internships were viewed more critically and contextualized as a side effect of youth unemployment, but generally articles aligned with employer interest in attracting cheap labour. Unpaid internships were pitched as future investments, reinforcing the outlook that optimizing their employability is every young person’s calling.

As the years progressed, interpretations shifted. Articles begin to emphasize class-based exclusion in the intern economy, challenging assumptions about meritocracy and a slew of articles took a legal angle, focusing on employers that break minimum wage regulations.

By 2015, the voices of interns and activists were being amplified, helping shift the narrative. Activists wrote op-eds, served as accessible sources for journalists and held events that spurred media coverage, including descending upon London’s Serpentine Gallery dressed as Santa Clauses carrying signs reading: “All we want for Xmas is pay.”

Tracing coverage over time shows that intern labour activism has had concrete effects, altering public discourse about unpaid internships and informing government policy reform on internships in countries like Canada and the U.K.

Activists have brought attention to unpaid internships and their deleterious effects by naming and shaming employers who break minimum wage law on social media, and have pushed governments to make concrete changes to legal and policy structures.

The Canadian Intern Association has been a major player in shifting Canadian policy.

U.S. law has been amended to protect interns against sexual harassment. Some media unions, like at VICE Canada, have collectively bargained for minimum hourly rates for interns.

In the U.K., various political officials support placing a four-week cap on internships, and a bill to that effect is making its way through the Upper Chamber.

Intern activists have made meaningful gains. But there are setbacks and new challenges.

Earlier this year, for example, the U.S. Department of Labor brought in measures that make it more difficult for an unpaid intern to argue they are entitled to a wage.

Shining the spotlight on unpaid internships is not the end of a struggle, but rather a training ground.

Advocates who have led the fight against unpaid internships, often a young person’s first foray into the labour market, have raised awareness about difficult labour conditions and have fought for the tenet that workplace inequalities are unacceptable and must not be regarded as inevitable.

Displacing the cliché “pay your dues” with the call to “pay your interns” is a significant achievement for a young movement.

Challenges, of course, remain. Improved regulations are only as good as enforcement, for example. Without careful oversight, unpaid internships will continue informally.

What is clear, however, is that the “experiential learning” of the intern rights movement over the last few years can only help in the broader labour battles to come.