Nick Mitrousis, a recent PhD graduate from the lab of University Professor Molly Shoichet, recently published a paper that describes a new strategy for repairing eye damage caused by conditions such as age-related macular degeneration or retinitis pigmentosa (photo by Mindy Ngyuen) 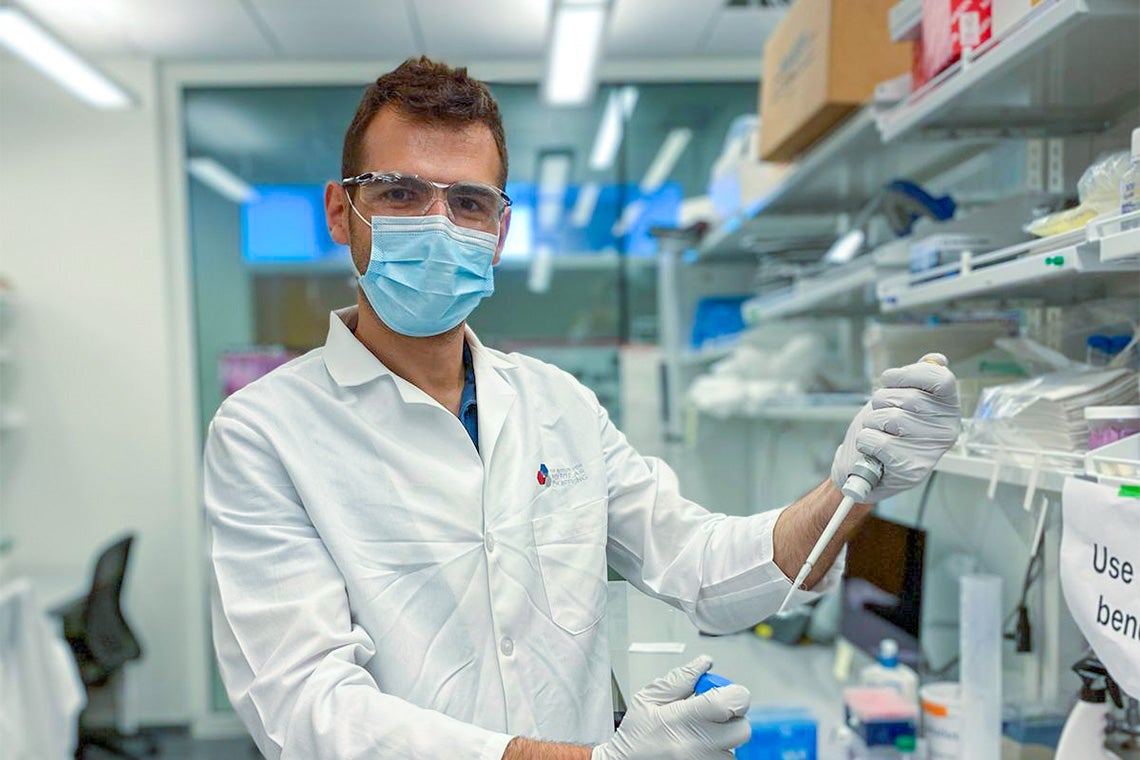 Researchers from the University of Toronto’s Faculty of Applied Science & Engineering have developed a new method of injecting healthy cells into damaged eyes. The technique could point the way toward new treatments with the potential to reverse forms of vision loss that are currently incurable.

Around the world, millions of people live with vision loss due to conditions such as age-related macular degeneration (AMD) or retinitis pigmentosa. Both are caused by the death of cells in the retina, at the back of the eye.

“The cells that are responsible for vision are the photoreceptors, which have an intimate relationship with another type of cell known as retinal pigmented epithelium (RPE) cells,” says University Professor Molly Shoichet of the Institute of Biomedical Engineering and the department of chemical engineering and applied chemistry, whose lab is located in the Donnelly Centre for Cellular and Biomolecular Research.

“In AMD, the RPE die first, and this then causes the photoreceptors to die.”

Many researchers have experimented with treatments based on injecting healthy photoreceptors or RPE cells into the eye to replace the dead cells. But integrating the new cells into the existing tissue is a major challenge, and most injected cells end up dying as well.

Shoichet and her team are experts in using engineered biomaterials known as hydrogels to promote the survival of newly injected cells after transplantation. The hydrogels ensure an even distribution of cells, reduce inflammation and promote tissue healing in the critical early days post-injection. Eventually, they degrade naturally, leaving healthy cells behind.

In 2015, the team used hydrogels to inject healthy photoreceptor cells into damaged retinas in a mouse model. While the team observed some vision repair, the benefits were limited, so they began to think more carefully about the relationships between RPE cells and photoreceptors.

“RPE and photoreceptors are considered as one functional unit – if one cell type dies, then the other one will, too,” says Shoichet. “We wondered if co-delivery of both cell types would have a bigger impact on vision restoration.”

As with photoreceptors, many groups had tried implanting RPE cells on their own, but nobody had ever integrated both cell types into a single treatment. Once again, the hydrogels pointed to a solution.

“What other groups have typically done is either inject photoreceptors in a saline solution, which often results in cells clustering together, or surgically implant a layer of RPE cells usually grown on a polymer film,” says Shoichet.

“Our hydrogel is viscous enough to ensure a good distribution of both cell types in the syringe, yet it also has important shear-thinning properties to facilitate injection through the very fine needle required for this operation. The combination of these properties opened up a new strategy for successful delivery of multiple cells.”

The team tested co-injection in a degenerative mouse model resembling AMD. In a paper recently published in the journal Biomaterials, they report that mice who received the co-injection regained about 10 per cent of their normal visual acuity. Those who received either cell type on its own showed little to no improvement.

Co-injected mice were also more active in dark chambers than light ones, showing that these nocturnal animals could once again distinguish light and shadow.

“I still remember the long days of behavioural testing,” says Nick Mitrousis, Shoichet’s former PhD student and lead author of the paper, now a post-doctoral researcher at the University of Chicago.

“We designed the experiment so that I wouldn’t know which mice had received the treatment and which received a placebo. When some of the mice started responding, I kept vacillating between optimism that the experiment might have actually worked and worry that the recovering mice might just be split between the different treatment groups.”

The worries were unfounded: it turned out that the co-injection treatment really had an effect. But both Mitrousis and Shoichet caution there is a very long road between these preliminary results and a trial that could eventually find its way into the clinic.

“First, we need to demonstrate the benefit of this strategy in multiple animal models,” says Shoichet. “We’ll also need a source of human photoreceptor cells and a way to further improve cell survival, both of which we’re working on. Still, we are very excited by these data and always open to collaboration to take the research further.”