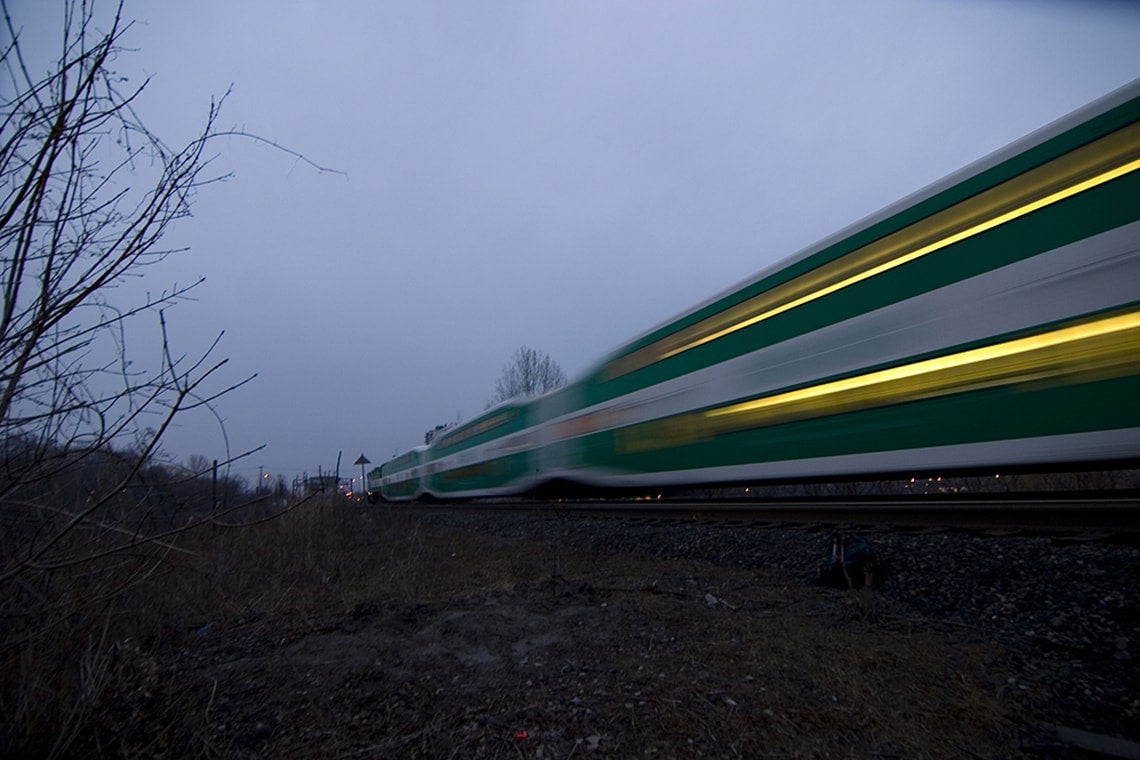 Greg Evans: “I don’t want to discourage people from taking transit or alarm them unduly, but there is an issue here” (photo by Kevin Hiscott via Flickr)

“I would advise pregnant women and passengers with heart or respiratory health problems not to travel in the front car,” says U of T's Greg Evans

A new U of T study finds that diesel trains may expose passengers to elevated levels of certain pollutants, especially if they are sitting directly behind the locomotive.

“Imagine yourself driving down a busy highway in a convertible, and spending your entire commute sitting behind a very large diesel truck,” said Greg Evans, professor at U of T's Faculty of Applied Science & Engineering and director of the Southern Ontario Centre for Atmospheric Aerosol Research (SOCAAR) at U of T. “That’s comparable to the levels we see here.”

“Black carbon is essentially soot and is formed right in the cylinder of the diesel engine,” said Evans. UFP are formed when gases in the exhaust condense into microscopic particles less than 100 nanometres in diameter or about 1000 times smaller than the width of a human hair.

Studies have linked both BC and UFP to detrimental health effects, although evidence is still emerging and not conclusive. However, both measurements also act as proxies for the complex mixture of gases in diesel exhaust, which is an established carcinogen and associated with respiratory, cardiovascular and reproductive health effects.

In prior research, Evans and his team have found elevated levels of BC and UFP next to busy streets and highways. It was during a morning commute that Jeong left the sensors turned on the train. When he saw the data, he and Evans realized how high the numbers were inside cars pulled by diesel locomotives.

“We were quite surprised, and after making confirmation measurements we got in touch with Metrolinx to let them know of the potential issue,” said Evans. Metrolinx is the transit authority for the Greater Toronto and Hamilton Area.

Over the course of 43 trips, the team gathered more data from inside commuter train cars. They also took measurements while walking along busy streets in downtown Toronto for comparison. In a paper appearing this week in the journal Atmospheric Environment, they report that:

“The health and safety of our customers and staff is our number one priority, which is precisely why we’ve supported the work of Dr. Evans and his research team,” said Greg Percy, chief operating officer for Metrolinx. “We welcome any findings that can help us run a healthier, safer transit service and we’re hopeful this work will result in improvements that will be applied throughout the industry and within other public transit agencies in Canada and abroad.”

Percy said that Metrolinx is taking a number of steps to address the issue such as installing high-efficiency filters in the ventilation systems of its train cars. The organization is also moving to locomotives with improved emissions standards and to electrified service on key routes, which will eliminate the diesel emissions altogether.

Evans and his team are currently working with Metrolinx and SNC Lavalin to test the new improved filters for the air intake vents. Preliminary results are positive.

“Installing the higher grade filters did produce a marked improvement with an 80 per cent reduction in the levels of black carbon,” said Evans.

“Metrolinx has been very supportive of our research.” said Jeong. “Our collaboration with them is most welcome as it will help translate our research findings into action. Further research is also required to evaluate in-transit exposure for all types of diesel-powered passenger trains.”

In the meantime, there are practical steps that passengers can take.

“I would advise pregnant women and passengers with heart or respiratory health problems not to travel in the front car,” said Evans. But he would not necessarily suggest avoiding the train entirely.

“I commute by train on a regular basis myself and have done so for years,” said Evans. “As an air quality researcher, I want to see a reduction in overall emissions, and trains are a more efficient system than people commuting in their cars. I don’t want to discourage people from taking transit or alarm them unduly, but there is an issue here. It underscores the importance of train electrification, which will address this indoor air issue in addition to helping to combat climate change.”