U of T to confer honorary degrees upon 13 influential scholars, artists and leaders 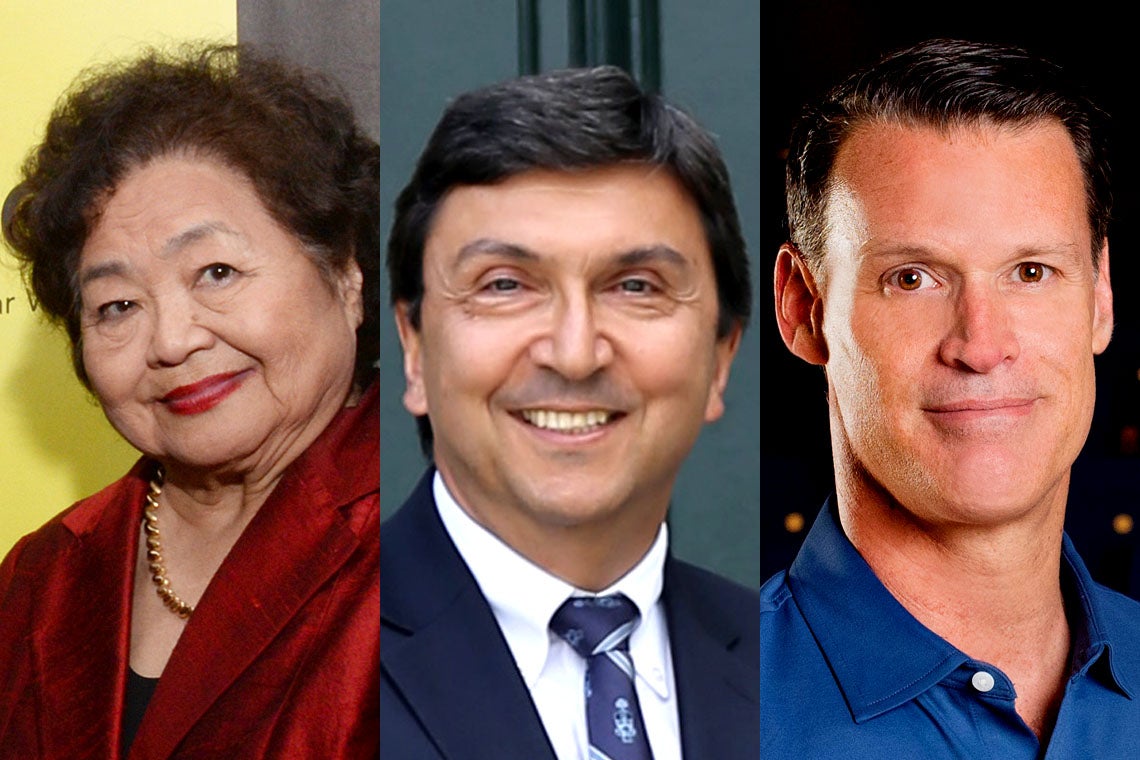 An Olympic gold medallist, an anti-nuclear war activist and a Supreme Court of Canada justice are just a few of the inspiring individuals who will be addressing this year’s graduating students during University of Toronto convocation ceremonies.

U of T will confer honorary degrees upon 13 individuals, selected for their exemplary leadership, creativity and generosity, including U of T President Emeritus David Naylor, business leaders and philanthropists Judy Goldring and Carlo Fidani, award-winning poet Lorna Goodison, and star swimmer and LGBTQ ambassador Mark Tewksbury.

“The individuals to be recognized this year with U of T’s highest honour represent excellence in a wide range of fields, and outstanding service to the university and society,” says Meric Gertler, president of U of T. “They are role models for all of us, and their presence at convocation in particular will add a special source of inspiration for our graduating students.”

The honorary degree recipients approved by U of T’s Governing Council for 2019 are: Bernstein has made his mark in fields ranging from HIV and cancer research to health funding and cross-disciplinary research. A U of T alumnus and author of more than 225 scientific publications, Bernstein has held significant leadership roles in major Canadian and international research institutions and is currently the president and CEO of CIFAR. His contributions to science have earned him many honours, including Officer of the Order of Canada and his induction into the Canadian Medical Hall of Fame. Chamberlin, a U of T University Professor Emeritus of English and comparative literature and former principal of New College, is the author of 10 books that explore a range of topics from the life of Oscar Wilde to poetry in the West Indies. He also served as a senior research associate with the Royal Commission on Aboriginal Peoples, which was a landmark toward redefining the relationship between Indigenous people and Canada’s federal and provincial governments. Chamberlin is an Officer of the Order of Canada and a fellow of the Royal Society of Canada. Fidani is the chairman of the Orlando Corporation, Canada’s largest privately owned industrial real estate company. His philanthropy has advanced health care, education and research, and he was named a Member of the Order of Canada in recognition of his generosity. Fidani has been a longtime supporter of the U of T community, where he helped lay the foundation for the Mississauga Academy of Medicine, a partnership between U of T’s Faculty of Medicine, U of T Mississauga and Trillium Health Partners. Goldring, a U of T alumna and business leader, has made significant contributions to the university, including nine years on Governing Council, serving as vice-chair from 2011 to 2012 and as chair from 2013 to 2016. She is executive vice-president and chief operating officer of AGF Management Ltd., and was inducted in 2015 into Canada’s Top 100 Most Powerful Women Hall of Fame. Goldring and her family have given generously to U of T, helping to establish the Goldring Centre for High Performance Sport and Victoria University’s Goldring Student Centre. Goodison is an award-winning poet, creative writer, painter, teacher, and public intellectual. Her work appears in major anthologies of Canadian, West Indian, British and world writing. Socially committed and historically engaged, Goodison’s poems and stories are human and humane, encompassing themes of community, connection and communion, especially among women. She is a professor of English language and literature at the University of Michigan and the poet laureate of Jamaica. After surviving the horrors of the Holocaust, Leipciger has been dedicated to sharing his story with people around the world. The U of T engineering alumnus seeks to educate future generations in order to combat racism and anti-Semitism. Under his leadership in the early 1980s, the Toronto Holocaust Remembrance Committee created Holocaust Education Week, now the largest such initiative in the world. In recent years, Leipciger has used his public speaking engagements to reflect on the shared experiences of Holocaust and Canadian residential school survivors. A justice on Canada’s highest court, Moldaver has been at the forefront of advocating for a fair and efficient trial system and the need to compensate those who are wrongly accused or convicted. The alumnus of University College and U of T’s Faculty of Law was first appointed to the bench in 1990 as one of the youngest judges named to the Supreme Court of Ontario. Moldaver was later appointed to the Ontario Court of Appeals in 1995 and the Supreme Court of Canada in 2011. Naylor has made major contributions to Canada, to public health, and to higher education and advanced research, especially at U of T, where he was president (2005 to 2013) and dean of medicine (1999 to 2005). Renowned for his work in medical sciences, clinical epidemiology and health-care services, he has led several influential public policy initiatives, including the National Advisory Committee on SARS and Public Health, and the Advisory Panel for the Review of Federal Support for Fundamental Science. He is a laureate of the Canadian Medical Hall of Fame and an Officer of the Order of Canada. Taylor is a U of T alumna and respected business leader.  The former president and CEO of Four Seasons Hotels and Resorts is currently chair of the board of the Royal Bank of Canada – the first woman in Canadian history to lead the board of a major chartered bank. Taylor maintains close ties with U of T, actively engaging with students through guest lectures and mentorship opportunities. She is also chair of the board of the SickKids Foundation and is a Member of the Order of Canada. Tewksbury is a celebrated Canadian swimmer, who has earned Olympic gold, broken world records and is a 21-time national champion. In 1998, Tewksbury came out as Canada’s first openly gay Olympic athlete and has been a mentor in the LGBTQ community ever since. He is also an author, humanitarian, speaker and educator, and his success in and out of the pool has earned him many honours, including the Meritorious Service Medal from the Governor General of Canada and the Queen’s Diamond Jubilee Medal. Thurlow knows first-hand the devastating effects of nuclear warfare as a survivor of the bombing of Hiroshima in 1945. Her life since then has been dedicated to anti-nuclear campaigning, playing a key role in pushing the United Nations to adopt a landmark treaty outlawing nuclear weapons. An alumna of social work at U of T, Thurlow is a Member of the Order of Canada and the recipient of numerous other awards and honours, including the Queen’s Diamond Jubilee Medal. In 2017 she accepted the Nobel Peace Prize on behalf of the International Campaign to Abolish Nuclear Weapons (ICAN). Troost is a successful entrepreneur as the founder and president of Peel Plastic Products. The U of T engineering alumnus has given back generously to his alma mater, playing an instrumental role in forming what is now called the Troost Institute for Leadership Education in Engineering, while also contributing to the construction of the Myhal Centre for Engineering Innovation & Entrepreneurship. Along with his wife Kathleen, he has also supported numerous undergraduate needs-based scholarships in the Faculty of Applied Science & Engineering. Troost is an Arbor Award recipient, recognized for his volunteer contributions to the university.

Beverly (Buffy) Sainte-Marie, who was nominated and approved for the honour in 2018,  will receive her honorary degree this year as well.